[Once, when a country attacked another by force of arms, it was called WAR, and human rights violations were identified as WAR CRIMES.  Now, as the US shoots Mexicans in Mexico, it is called an approved, acceptable, police action.  It is another obscenity of arrogance and impunity.  Frontlines ed.]

US border patrol agent looks towards Mexico from the bank of the Rio Grande River. Photograph: John Moore/Getty Images

A United States court has all but declared open season on Mexican nationals along the US-Mexico border. Border patrol agents may shoot foreign nationals in Mexico with impunity – provided that those at whom they aim are standing within feet of US territory.

According to a ruling by the US Court of Appeals for the Fifth Circuit last week, agents who shoot and kill people in Mexico while standing on US soil will never be held to account, except before their administrative agencies. No court will ever review these actions and the families of the victims will be left with no avenue for justice. An agent’s actions will not be governed or restrained by the constitution nor subject to review by US courts.

This isn’t a hypothetic situtation: all of this has already happened.

END_OF_DOCUMENT_TOKEN_TO_BE_REPLACED 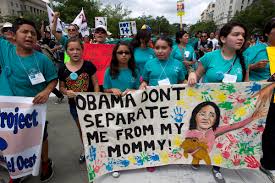 END_OF_DOCUMENT_TOKEN_TO_BE_REPLACED

Hundreds of Mexican immigrants and other activists held actions in at least 47 US towns and cities on Dec. 3 to protest the abduction of 43 teachers’ college students by police and gang members in Mexico’s Guerrero state in September; each of the 43 students had one of the actions dedicated to him.

The protests were organized by UStired2, a group taking its name from #YaMeCansé (“I’m tired now,” or “I’ve had it”), a Mexican hashtag used in response to the violence against the students, who attended the Raúl Isidro Burgos Rural Teachers’ College in the Guerrero town of Ayotzinapa. The protesters focused on US government financing for the Mexican government—especially funding for the “war on drugs” through the 2008 Mérida Initiative—but they also expressed outrage over the US court system’s failure to indict US police agents in two recent police killings of unarmed African Americans. END_OF_DOCUMENT_TOKEN_TO_BE_REPLACED

[The ongoing repressive Israeli settler-colonial project on the Palestinian people, facing growing exposure and international opposition, has increasingly brought Zionist ideologues (an echo of American “manifest destiny” expansionists) as well as “soft Zionist” real-politicians to resort to ever-more arrogant and hyperbolic deceptions to prevent their imperial allies from thinking they’ve outlived their usefulness.  At the same time, the collaboration of the corrupt Palestinian “leadership” with the “realities” of imperial power and Israeli settler-colonialism, has spun a very thin theatrical disguise of Palestinian identity and loyalty.  Both the Israeli colonist-settlers and the Palestinian quislings (struggling to extend their credibility in their mutually-symbiotic weakened states) depend upon blasting the mutually-reinforcing lies and deceptions of each other.  The details of this slimy and shadowy faux “opposition” are revealed in this recent article by author Jeff Blankfort.  —  Frontlines ed.]

“Imagine for a moment, what the reaction would have been in Northern Ireland if the IRA had taken to guarding the streets of Belfast and Derry for Her Majesty’s occupation forces.”

Shortly after the signing of the Oslo accords between Israel and the PLO in 1993, the Jerusalem Post ran a cartoon that depicted a critical aspect of those accords which has rarely been discussed much less acknowledged. In the cartoon, a smiling Yasser Arafat was sitting upright on a stretcher giving a “V” sign. The stretcher bearers were Israeli Prime Minister Yitzhak Rabin and Shimon Peres.

Its message was clear: the Oslo agreement had come to the rescue of the PLO chairman whose reputation among his fellow Palestinians had sunk to the bottom of the barrel. The price they were to pay was dear: the legitimizing of Israel’s presence in 62% of the West Bank, what is commonly known as Area C and which Israel is quite likely to annex. Arafat’s representative at Oslo who negotiated the accords that effectively signed away West Bank land to Israel and ended the first intifada was Mahmoud Abbas.

Netanyahu, Obama, and Abbas — Partners in a Theatrical Crime

Now, let’s jump ahead 21 years to the present where the support of West Bank Palestinians for Abbas, Arafat’s successor, has been even lower than it was for the late PLO chair and with good reason: By any definition one chooses, Abbas is a traitor, a collaborator with the enemy. His Palestinian Authority “Preventive Security” police force closely coordinates its activities with Israel’s security forces with the goal of suppressing resistance to Israel’s ongoing occupation and ethnic cleansing while leaving Palestinians without a semblance of protection against Israeli raids on West Bank towns and refugee camps. For all intents and purposes, that goal has been achieved.

END_OF_DOCUMENT_TOKEN_TO_BE_REPLACED

“Nothing will stop our national security officials from making this country more secure from one of the least pressing dangers Americans face: terrorism.”
By Todd Miller | November 25, 2013

In this Nov. 12, 2013 photo, a Haitian man crosses into Haiti along the border with Jimani, Dominican Republic. In September, the Dominican Constitutional Court ruled that being born in the country does not automatically grant citizenship, including people born to non-legal residents going back to 1929. The ruling is a reflection of deep hostility in the Dominican Republic to the vast number of Haitians who have come to live in their country, many brought in to work in the sugar industry and their descendants. (AP Photo/Dieu Nalio Chery)

It isn’t exactly the towering 20-foot wall that runs like a scar through significant parts of the U.S.-Mexican borderlands. Imagine instead the sort of metal police barricades you see at protests. These are unevenly lined up like so many crooked teeth on the Dominican Republic’s side of the river that acts as its border with Haiti. Like dazed versions of U.S. Border Patrol agents, the armed Dominican border guards sit at their assigned posts, staring at the opposite shore.  There, on Haitian territory, children splash in the water and women wash clothes on rocks.

One of those CESFRONT (Specialized Border Security Corps) guards, carrying an assault rifle, is walking six young Haitian men back to the main base in Dajabon, which is painted desert camouflage as if it were in a Middle Eastern war zone.

If the scene looks like a five-and-dime version of what happens on the U.S. southern border, that’s because it is. The enforcement model the Dominican Republic uses to police its boundary with Haiti is an import from the United States. END_OF_DOCUMENT_TOKEN_TO_BE_REPLACED

An anti-Palestinian group is mounting an attack against students at San Francisco State University. Following an on-campus event honoring a mural of the late Palestinian scholar Edward Said, the group asserted that an artistic stencil glorified “the murder of Jews.”

The university’s president, at the urging of pro-Israel advocates, has joined the condemnation of the students.

On 7 November, as part of the sixth annual event to celebrate the mural and Palestinian culture, activists with several allied student organizations, including the General Union of Palestine Students (GUPS) and the Student Kouncil of Intertribal Nations (SKINS), an indigenous student group, set up informational tables on the campus’s Malcolm X Plaza.

The SKINS’ table made various stencils available for students to express themselves using images and slogans. One slogan read “my heroes have always killed colonizers,” which has been used for years by indigenous cultural workers in commemorating the resistance to the genocide of First Nations peoples and other indigenous communities around the world.

For the last two years, for example, indigenous communities have held cultural events entitled “My Heroes Have Always Killed Colonizers” in San Francisco during Indigenous Peoples’ Day — a day reclaimed from the national holiday celebrating the legacy of Christopher Columbus.

It didn’t take long for local Zionist watchdogs to launch a vicious attack against the entire event, the student organizations involved, and even the co-sponsoring academic department on campus, calling it “anti-Semitic” and insinuating that the stencil “glorif[ies] the murder of Jews.” END_OF_DOCUMENT_TOKEN_TO_BE_REPLACED