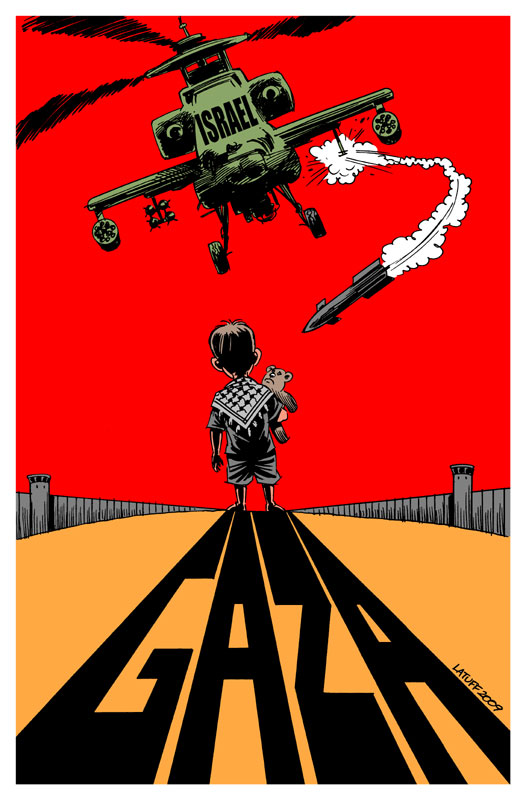 [Today, July 31, amidst loudly announced “ceasefire talks” at hand in Cairo, one can’t help but think of the endless see-saw of aggression by the gun and the aggression by the pen.  In this article below, the noted Palestinian scholar, Dr. Hatem Bazian, predicts the ominous and dangerous play about to be performed behind the doors in Cairo, based upon his careful and detailed review of the Oslo Accords and Camp David Talks (and other highly-touted but widely seen, in time, as notorious embellishments and extensions of the bloody settler-colonial Zionist regime in the historic land of Palestine).  As the balladeer Woody Guthrie once wrote, “Yes, as through this world I’ve wandered / I’ve seen lots of funny men; / Some will rob you with a six-gun, / And some with a fountain pen.”  How the appeal of Dr. Bazian — to keep eyes fixed on the goal of liberation, and not be tricked or dissuaded — will be carried by the Palestinian representatives in the Cairo talks, will be seen in the days to come. — Frontlines ed.]

Gaza: A Palestinian War of Independence

CAIRO’s Negotiations Should Focus on Freedom and Dignity for the Palestinians.

The PLO announced the sending of unified delegation to Cairo to participate in intense negotiations with Israel through Egyptian intermediaries intended to institute a ceasefire in Gaza. Leading up to the PLO delegation announcement, PA President Mahmoud visited Saudi Arabia to coordinate and reaffirm support for the Egyptian ceasefire plan. As such, one has to be clear on the unfolding process and the negotiation lines that will become transparent in the next few days. More importantly, how best for the Palestinians as a people, to confront plans coming from the smoke filled rooms in Cairo which seeks to dispossess them one more time but with the complicity and participation of the PA, Arab “leaders” and the Western powers.

Gaza’s resistance and steadfastness, in reality, is a Palestinian war of independence witnessing complete self-reliance and internal grassroots solidarity in the face of Israeli, PA, Arab and Western collusions to maintain the Occupation intact.

Let us again be clear on Israel’s approach to the Cairo negotiations, which at present sees high level coordinating of its positions with Egypt, Saudi Arabia and the US with the specific short-term goal of a ceasefire to immediately be followed with restoring Abbas’s authority and power inside Gaza. Israel’s failure in this campaign is as much a result of the lack of intelligence on the ground as it is the success of resistance planning on the ground. As such, immediate reconstitution of Abbas and the PA in Gaza would be the game changer for Israel if the same framework present in the West Bank is permitted to sink roots in the Strip.

END_OF_DOCUMENT_TOKEN_TO_BE_REPLACED

While the world recoils in horror at the sight of Israeli troops slaughtering Palestinians by the hundreds, one high-ranking Israeli parliamentarian says his country should go further and implement its own final solution in Gaza.

Feiglin, who is banned from entering Britain for “seeking to provoke terrorist acts,” calls for an all-out attack on Gaza with “no consideration for ‘human shields’ or ‘environmental damage.’” He also advocates a “total siege” on Gaza, as if the current siege isn’t total nor devastating enough in its impact on the 1.8 million residents of the world’s largest open-air prison.

After the ‘ultimatum,’ ‘attack,’ ‘siege’ and ‘defense’ phases of Feiglin’s “solution,” we move to what he calls the “conquer” phase.

“The IDF (Israel Defense Forces) will conquer the entire Gaza, using all the means necessary to minimize any harm to our soldiers, with no other considerations.”

That means we’d surely be witnessing more slaughter of innocent men, women, children, infants, the elderly, the ill and the disabled, as if there’s not already enough of that going on in Gaza.

And for what? For Zionist lebensraum and cheaper rent in Tel Aviv: END_OF_DOCUMENT_TOKEN_TO_BE_REPLACED

Homecoming: The Algerian squad are paraded through Algiers on an open-top bus on Wednesday

Algeria forward Islam Slimani has revealed that he and his team-mates are donating their money to people in Gaza.

The north African side won the hearts and minds of many with their heroic effort in pushing Germany to extra-time in their round of 16 World Cup clash.

And now their display of generosity to the poor and needy in Gaza has further endeared the watching world.

Slimani, who plays for Sporting Lisbon, said: ‘They need it more than us.’ END_OF_DOCUMENT_TOKEN_TO_BE_REPLACED

[For many years, the administration of Delhi University (acting upon the repressive urgings of the Indian state against prominent activists) have pursued harassment and eviction-threats and -orders against the disabled Professor GN Saibaba and his family, who have struggled to maintain wheel-chair accessible housing on campus..  Last year, these threats came to a head with actual attempts to evict the professor and his family–which was only prevented by mass mobilizations of students and faculty, defending the housing rights of the family  (see background on all this at http://sanhati.com/articles/6010/).   Now, as outrage over the abduction, arrest, and refusal to provide medical care and appropriate care for this wheelchair-bound disabled imprisoned professor, the state has refused his release on bail, and in the same period have pressed forward on the eviction of his family.    But now, the university has backed off on the eviction, not because they have had a change of heart, but because the state is calculating the political effect that such a malevolent eviction of the family may have, risking the state’s pursuit of their fabricated case against Dr. Saibaba.  What next repressive steps the state will take, cannot be foretold, but anything must be expected.  Free Dr.Saibaba!  Stop Hounding and Suppressing Activists!  — Frontlines ed.]

Suspended DU professor GN Saibaba’s family will not be evicted

New Delhi: Delhi University (DU) on Saturday assured a court here that family members of its suspended professor G N Saibaba, arrested for his alleged Maoist links, will not be evicted from their residence provided by DU.

“He (DU’s counsel) is assuring orally that he will inform the authorities about the court order (passed by a vacation judge on June 9 and thereby staying proceedings of eviction by the university)…,” District Judge A K Chawla said.

The assurance by DU came while the court was hearing a petition filed by Saibaba’s wife Vasantha, challenging the June 2 order of estate officer in which the professor was asked to vacate the Gwyer Hall premises provided to him by DU. END_OF_DOCUMENT_TOKEN_TO_BE_REPLACED