Immigrant advocates say hundreds of men have launched a hunger strike at an immigrant detention center in the high desert city of Adelanto, Calif., making it the fourth immigrant detention facility in the United States where protesting detainees have refused food in recent weeks.

Attorneys for some of the men and advocates with a detention center visitation group say more than 300 men stopped eating Oct. 30 to protest conditions at the center. They said another group of detainees joined them in the strike on Wednesday.

Shannah Abdulluah, an asylum-seeker from Ghana who has been in Immigration and Customs Enforcement custody since he asked for amnesty at the Mexican border 11 months ago, said he and about 90 other men joined the hunger strike this week.

Abdulluah, whose asylum claim was recently rejected, said his goal is to be released on parole and to raise awareness about how detainees are treated in the privately run detention facility.

“We won’t stop,” Abdulluah said in a phone call from the detention center Thursday. “If it’s going to take us one week or one month we will continue.” 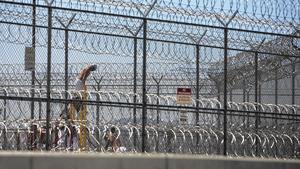 An ICE official who was not authorized to speak on the issue confirmed that some Adelanto detainees have been declining meals in recent days and said ICE officials have met with multiple groups of detainees to listen to their concerns and determine appropriate next steps.

Ibrahim Karim, a detainee from Ghana, said in a phone interview that a large number of detainees who had been participating in the hunger strike began eating Thursday and Friday. But he said that he and at least 60 other people are still refusing food.

The center, which is run by Florida-based Geo Group, was recently expanded by 650 beds despite protests from more than two dozen members of Congress over alleged medical neglect at the facility.
A letter sent to ICE by members of Congress in July highlighted nearly a dozen cases of supposed neglect, including the 2012 pneumonia death of a Mexican immigrant named Fernando Dominguez. An inspection report that year by the Department of Homeland Security said that Dominguez “received an unacceptable level of medical care” at Adelanto, and that his death could have been prevented.

The letter also raised questions about the death this year of Adelanto detainee Raul Ernesto Morales-Ramos, a Salvadoran immigrant who apparently died of undiagnosed intestinal cancer after being detained by ICE for more than four years. Morales-Ramos had lodged multiple complaints with Adelanto’s medical staff about worsening symptoms, according to his family’s attorney.

In recent weeks, ICE has faced reports of hunger strikes at several other detention facilities, including in El Paso and Hutto, Texas, and LaSalle, La.

In a demands letter that Fialho said was written by one of the leaders of the strike, the detainees call for better medical care and a better grievance policy when detainees make complaints. The letter also asks that “no retaliation be taken upon any of us” in response to the hunger strike. “We are detainees and not prisoners,” it says.