[As the horrifying death toll continues to fise to many thousands, amid the collapse of much of the home, business, and cultural structures in Nepal — the result of milleniums of colonial domination, oppression, and plunder — the enormous need for international rescue and reconstruction is a plaintive appeal to the good intentions of people everywhere.  But the aid will come with many conditions by the powers who bear gifts.  It is instructive to study the experience of the “aid” and “recovery” of Haiti from the devastating earthquake of 2010.  The US turned Haitian earthquake aid into neo-colonial, militarized occupation.  The struggles of people to control their own recovery has been an ongoing fight in Haiti, and now in Nepal.  The following except from a chapter in the important new book Good Intentions: Norms and Practices of Humanitarian Imperialism makes this Haitian experience hauntingly present in the streets of Kathmandu today.  —  Frontlines ed.]

US Imperialism and Disaster Capitalism in Haiti

At 4:53 PM, on Monday, January 12, 2010, a 7.0 magnitude earthquake shocked Port-au-Prince, Haiti. It was the most devastating earthquake the country had experienced in over 200 years, with estimated infrastructure damage between $8 and $14 billion (Donlon, 2012, p. vii; Farmer, 2011, p. 54). This is particularly astounding considering that Haiti is recognized as the poorest country in the Western Hemisphere, with 70% of individuals surviving on less than $2 US per day (Farmer, 2011, p. 60). The quake’s epicentre was located 15 miles southwest of Port-au-Prince, which is the most heavily populated area in all of Haiti (Donlon, 2012, p. vii). Approximately three million Haitians, one third of the country’s population, live in Port-au-Prince and every single individual was affected by the disaster: the Haitian government reported 230,000 deaths, 300,600 injured persons, and between 1.2 to 2 million displaced people (Donlon, 2012, p. vii). The country presented a “blank slate,” with all manner of political, economic, and social services in absolute ruin—an ideal circumstance to exercise the arms of the new (US) imperialism: notably, NGOs, the UN Stabilization Mission in Haiti (MINUSTAH), the militarization of humanitarian aid, and disaster capitalism.

US hegemonic globalization is the current world order—it is the new imperialism. The breadth of US influence across the globe in terms of politics, economics, and military are unparalleled across history, affording the nation the means to orchestrate geopolitics in its favor through coercion, masked by rhetorical altruism (Moselle, 2008, pp. 1, 8). However, the US is currently challenged by a state of economic decline and shifting international relations. In an effort to maintain its dominant position, the US must implement a number of novel strategies. As such, the “new imperialism” is distinguished by certain contemporary characteristics: notably, war in the pursuit of dwindling natural resources, the militarization of the social sciences, war corporatism, the romanticization of imperialism, and as a central focus to this paper, the framing of military interventions as “humanitarian,” legitimized through rhetoric of freedom, democracy, and the right to intervene. In truth, the militarization of humanitarian aid serves to facilitate the imposition of neoliberal economic policies through the exploitation of weakened states—a
strategy known as “disaster capitalism”.

END_OF_DOCUMENT_TOKEN_TO_BE_REPLACED

At least 6,000 protesters have marched through Haiti’s capital to demand lower fuel prices and the ouster of President Michel Martelly.

The protest in Port-au-Prince on Saturday remained peaceful overall although police threw tear gas and dispersed a crowd that had burned rubbish and tires in the street to block traffic. END_OF_DOCUMENT_TOKEN_TO_BE_REPLACED

Haiti has seen many anti-government protests in recent months calling for President Michael Martelly to step down, amid a growing anger over the high levels of government corruption. Elections have been delayed now for years.

People took to the streets again today. As the video above shows, the protest march approaching the Presidential Palace faced a barrage of gunfire and tear gas.  While major media outlets have the audacity to falsely claim that Haitian police and UN peacekeepers fired only into the air to disperse the protest while on the same page show a photo of the man seen below taking aim at head height. It is profoundly clear that shots to kill were taken.

END_OF_DOCUMENT_TOKEN_TO_BE_REPLACED

“Nothing will stop our national security officials from making this country more secure from one of the least pressing dangers Americans face: terrorism.”
By Todd Miller | November 25, 2013

In this Nov. 12, 2013 photo, a Haitian man crosses into Haiti along the border with Jimani, Dominican Republic. In September, the Dominican Constitutional Court ruled that being born in the country does not automatically grant citizenship, including people born to non-legal residents going back to 1929. The ruling is a reflection of deep hostility in the Dominican Republic to the vast number of Haitians who have come to live in their country, many brought in to work in the sugar industry and their descendants. (AP Photo/Dieu Nalio Chery)

It isn’t exactly the towering 20-foot wall that runs like a scar through significant parts of the U.S.-Mexican borderlands. Imagine instead the sort of metal police barricades you see at protests. These are unevenly lined up like so many crooked teeth on the Dominican Republic’s side of the river that acts as its border with Haiti. Like dazed versions of U.S. Border Patrol agents, the armed Dominican border guards sit at their assigned posts, staring at the opposite shore.  There, on Haitian territory, children splash in the water and women wash clothes on rocks.

One of those CESFRONT (Specialized Border Security Corps) guards, carrying an assault rifle, is walking six young Haitian men back to the main base in Dajabon, which is painted desert camouflage as if it were in a Middle Eastern war zone.

If the scene looks like a five-and-dime version of what happens on the U.S. southern border, that’s because it is. The enforcement model the Dominican Republic uses to police its boundary with Haiti is an import from the United States. END_OF_DOCUMENT_TOKEN_TO_BE_REPLACED 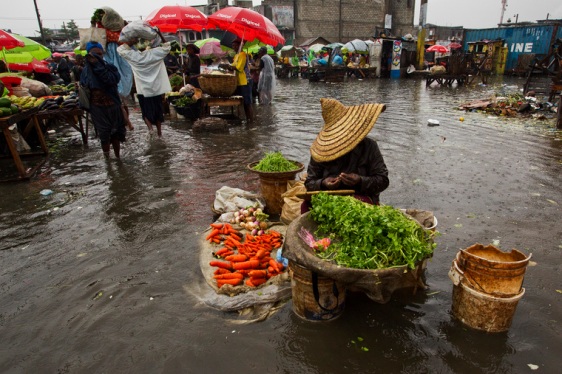 Haiti is suffering one of the worst impacts of Hurricane Sandy as torrential rains and flooding damaged more than 70 percent of the country’s crops, further weakening its already insecure food supply.

Hurricane Sandy caused major flooding in Haiti, resulting at least 52 deaths and damaging more than 70 percent of the country’s crops.

Staple crops like maize, plantains and bananas have been affected, which means Haiti will have to rely even more on increasingly expensive food imports as record summer droughts have driven up prices.

According to the U.N. World Food Program, Haiti depends on food imports for half of its required supply. END_OF_DOCUMENT_TOKEN_TO_BE_REPLACED

What I did not see this week were bulldozers scooping up the mountains of concrete remaining from last January’s earthquake. No cranes lifting metal beams up to create new buildings. No public works projects. No housing developments. No public food or public water distribution centers. END_OF_DOCUMENT_TOKEN_TO_BE_REPLACED

Residents of Caracol, a village in Haiti’s Northeast department, say they were never consulted or even warned about plans to build a huge new “free trade zone” (FTZ, a complex of assembly plants) on land where many of them have been farming for some 20 years. “It’s the most fertile area we have at Caracol,” resident Renel Pierre told journalist Sylvestre Fils Dorcilus. “It’s inconceivable and unacceptable that the government could choose this part of the land to set up an industrial park.”

The Parc industriel du Nord (Northern Industrial Park, PIN) is a joint project of the US government, the Inter-American Development Bank (IDB, or BID in French and Spanish) and South Korea’s leading apparel manufacturer, Sae-A Trading Co. Ltd. Together, they are putting some $300 million into the FTZ, which promoters claim will generate 20,000 jobs in the short term and 65,000 jobs over time. The Haitian government provided the land, which it says is state property; the administration of former president René Préval (1996-2001 and 2006-2011) promised to compensate the peasants who have been using it. END_OF_DOCUMENT_TOKEN_TO_BE_REPLACED

Earthquake shook everything but the system!

One year on from the earthquake that devastated Haiti, it may still take a decade just to clear the rubble if work continues at its present pace. Meanwhile the poor suffer, the rich profit, and the show is run by NGOs and other outsiders
by Christophe Wargny

Toussaint Louverture International Airport has returned to good health, clean and almost welcoming. It has escalators and duty-free shops. Jet bridges take you straight from your plane into the terminal, as never happened before the earthquake of 12 January 2010. It gives you hope that reconstruction has begun, or is beginning; the promised billions might have finally hit their first targets. You imagine the bulldozers, the diggers and the site trucks at work: perhaps these explain the traffic snarl-up that the taxi driver immediately tells you is a permanent fixture.

But no: rebuilding the airport is the only project to take shape in almost 12 months, backed by clearing the main urban arteries. Reconstruction has not yet started. Unlike the once solid buildings of now devastated Port-au-Prince, the grip of politicians and notables who have strangled Haiti for two centuries managed to withstand the earthquake. They’ve even stolen the word “reform”, which framed the social movement’s projected rebuilding of the institutions and state structures, and emptied it of meaning. For the moment, “reform” equals “staying just the same”. END_OF_DOCUMENT_TOKEN_TO_BE_REPLACED

For the last twenty years, the most powerful political and economic interests in and around Haiti have waged a systematic campaign designed to stifle the popular movement and deprive it of its principal weapons, resources and leaders,’ writes Peter Hallward. January’s earthquake ‘triggered reactions that carried and that are still carrying such measures to entirely new levels.’

Just before 5pm on Tuesday 12 January 2010, Haiti’s capital city and the surrounding area were devastated by the most catastrophic earthquake in the history of the hemisphere. The scale of the destruction was overwhelming.

According to the most widely cited estimates, around 220,000 people perished and more than 300,000 suffered horrific injuries, leading to many thousands of amputations.[2] Stories told by the bereaved defy summary. Perhaps as many as 200,000 buildings were destroyed, including 70 per cent of the city’s schools.

Today, more than half a year after the disaster in which they lost their homes and virtually all their belongings, around 1.5 million people continue to live in makeshift camps with few or no essential services, with few or no jobs, and with few or no prospects of any significant improvement in the near future.

Although the earthquake has no precedent in Haitian history, the factors that magnified its impact, and the responses it has solicited, are all too familiar. They are part and parcel of the fundamental conflict that has structured the last thirty years of Haitian history: The conflict between pèp la (the people, the poor) and members of the privileged elite, along with the armed forces and international collaborators who defend them. END_OF_DOCUMENT_TOKEN_TO_BE_REPLACED