The Following is a list of names of all Palestinians shot and killed by Israeli fire in occupied Palestine, in the period between Thursday October 1st and the end of Friday November 13th, 2015, as confirmed by the Palestinian Health Ministry.

Immigrant advocates say hundreds of men have launched a hunger strike at an immigrant detention center in the high desert city of Adelanto, Calif., making it the fourth immigrant detention facility in the United States where protesting detainees have refused food in recent weeks.

Attorneys for some of the men and advocates with a detention center visitation group say more than 300 men stopped eating Oct. 30 to protest conditions at the center. They said another group of detainees joined them in the strike on Wednesday. END_OF_DOCUMENT_TOKEN_TO_BE_REPLACED

Another 24 filmmakers, including Kundan Shah of “Jaane Bhi Do Yaaro” fame and Saeed Mirza who directed “Nukkad”, besides writer Arundhati Roy today returned their national awards over “growing intolerance”, voicing fears that the country’s robust democracy might be “coming apart” in the current atmosphere.

With this, at least 75 members of the intelligentsia have either returned national or literary awards, in an escalation of protests by writers, historians, filmmakers and scientists even as writer Nayantara Sahgal reiterated that “secularism was under threat” like never before. Sahgal was among the first to return the honours when she gave back the Sahitya Akademi award in October. END_OF_DOCUMENT_TOKEN_TO_BE_REPLACED

Hundreds of Berkeley High School students walked out of class Thursday in protest of racist and threatening messages that showed up on one of the school’s library computers.

Throngs of students waving posters and bullhorns took to Milvia Street chanting “black lives matter” and “raise a fist if you’re not gonna take this” as they walked through Civic Center Park to Berkeley City Hall, demanding an investigation into the incident from school officials.  END_OF_DOCUMENT_TOKEN_TO_BE_REPLACED

As many as 72 Palestinians have been killed by the Israeli army across the West Bank, East Jerusalem, Gaza Strip and within Israel since the outbreak of the Jerusalem Intifada on 1 October, the Ahrar Centre for Prisoners and Human Rights said.

The centre released its report in a press conference on Sunday which revealed that 24 per cent of those killed, 17 people, were children or minors while a further five were women. END_OF_DOCUMENT_TOKEN_TO_BE_REPLACED

No to the reactionary “17-point Agreement”! No to the anti-migration policy of Government and the EU! Solidarity with migrants and refugees!

The recent “17-point Agreement” that was signed on 26/10 in Brussels during the “mini Summit” confirms and strengthens the anti-migration policies of the EU.

This agreement (signed by the governments of Greece, Albania, Austria, Bulgaria, Croatia, FYROM, Germany, Hungary, Romania, Serbia, and Slovenia) is an attempt to fortify the EU against the increasing refugee flows caused by the imperialist interventions in Syria and the whole Middle East and Eastern Mediterranean regions.

Undoubtedly the European imperialists not only do not want to bring relief to the refugees, not only do not see them as human beings who need support and shelter for a secure and decent life, but on the contrary they see them as unwanted, as a bothersome “side effect” of their imperialist expansionist policies. END_OF_DOCUMENT_TOKEN_TO_BE_REPLACED

This article from Ferguson In Paris, an anti-police brutality group in France, does not contain a byline. The reason for this is because members of that group say they must maintain anonymity as much as possible remain to avoid abusive retaliation from authorities and others in France. “We publish under the name of the organization because of fierce repression regarding activists dealing with police brutality,” explained a Ferguson In Paris member during a recent email exchange with ThisCan’tBeHappening.net. The claimed support by French government authorities and other for freedom of speech following the fatal shootings at the Charlie Hebdo magazine office last January 2015 apparently do not extend to French activists opposed to brutality by French police. (Ferguson In Paris, an organization that fights against police brutality and racism/discrimination in France, works in solidarity with anti-brutality groups in the United States.)
AN UGLY UNDERSIDE OF FRANCE: RAMPANT POLICE BRUTALITY
In 2005, the human rights monitoring organization Amnesty International published a report titled: “France: The search for justice.” That Amnesty report examined allegations of serious human rights violations by law enforcement officials across France between 1991 and 2005. Those human rights violations by law enforcers included unlawful killings, excessive use of force, torture, and other mistreatment. Racist abuse was reported in many cases examined by Amnesty and racist motivation appeared to be a factor in many more. As that report noted, the persistent targets of police abuse in France are “foreign nationals or French nationals of foreign origin.”

On the basis of the evidence examined, Amnesty International concluded that a pattern of de facto impunity existed with regard to police and other law enforcement officials in France. Failures by French officials “to address” police abuses have created a “climate of effective impunity for law enforcement officers,” the report stated. END_OF_DOCUMENT_TOKEN_TO_BE_REPLACED 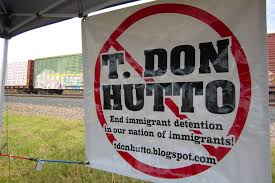 Cristina Parker, immigration programs director for Grassroots Leadership, told RH Reality Check that one striker who contacted the organization Sunday night to brief them on the situation used the Spanish expression “casi todo,” suggesting that nearly all of the roughly 500 detainees are now observing the strike. END_OF_DOCUMENT_TOKEN_TO_BE_REPLACED