Workers of All Colors Unite!

International Longshore and Warehouse Union Local 10 in the Bay area will use its monthly stop-work meeting on Friday to idle the ports of Oakland and San Francisco to protest recent police killings of African Americans. The executive board and membership of Local 10 aligned its “Union Action to Stop Police Killings of Black and Brown People” with International Workers’ Day, which is celebrated on May 1 in many countries.

May Day in Oakland: ILWU March and Rally Against Police Terror!
STATEMENT TO THE BAY AREA LABOR MOVEMENT
A CALL TO ACTION!
April 22, 2015
The membership of International Longshore and Warehouse Union (ILWU) Local 10 has voted at its meeting on April 16, 2015 to call for a stopwork meeting on May 1st. It is fitting that on May Day, International Workers Day, Bay Area ports will be shut down to protest the racist police killing of mainly black and brown people. This is the first U.S. union to take such action. Local 10 took similar action on May Day 2008 to close Pacific Coast ports stopping all work to demand an end to the wars in Iraq and Afghanistan, the first such anti-war union action in American labor history.

ILWU Local 10 dock workers march in San Francisco on May Day 2008 in the first-ever strike action by U.S. workers against U.S. imperialist war. The work stoppage shut down all 29 West Coast ports demanding an end to the war and occupation of Iraq and Afghanistan, as well as support for immigrant rights.

Every July 5, Bloody Thursday, the ILWU shuts down all West Coast ports to commemorate the killing of two strikers shot in the back by police during the 1934 maritime strike. That police murder provoked the San Francisco General Strike. Most recently the local has rallied and closed Bay Area ports to call for justice for the family of Oscar Grant, a young black man killed by BART police in 2009.
Today, Local 10, outraged by the recent escalation in police brutality throughout the U.S. that has resulted in the needless killing of innocent and unarmed minorities, has called for unions and workers to join our march from the port to Oakland City Hall.
WHERE: Port of Oakland, take Adeline St. to portside of overpass
WHEN: 9AM May 1st, March to City Hall @ 10AM for 11:30 AM Rally
Stop Police Terror Committee
For information call Local 10 Chairperson Stacey Rodgers 510-686-0634. 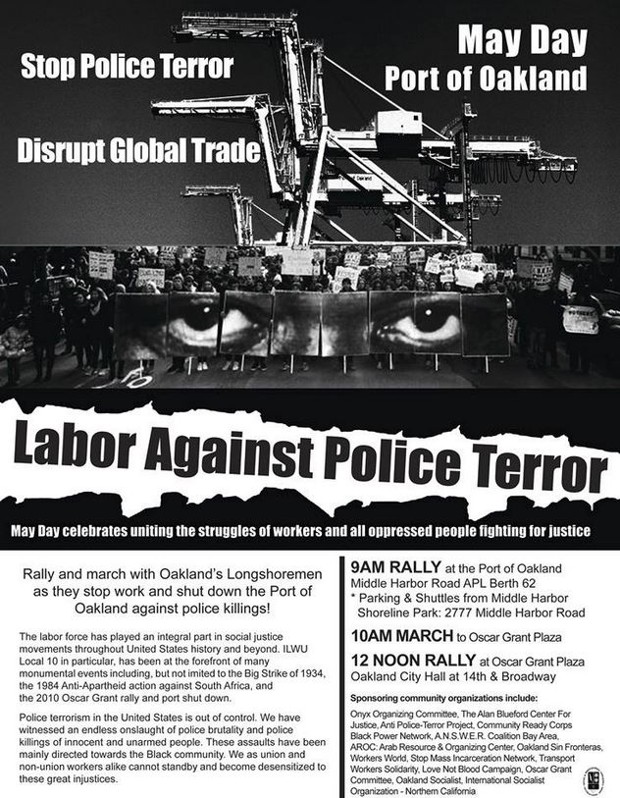