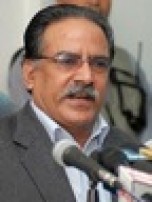 KATHMANDU, JUN 03 –  The UCPN (Maoist) on Thursday concluded that the ruling Nepali Congress and the CPN (UML) betrayed the party by not implementing the “unwritten agreement” and the May 28 three-point deal. The party also decided to intensify protests against the government.

In a meeting of the Standing Committee of the party, the Maoists decided to come up with protest programmes if the prime minister does not quit “immediately,” according to a party source.  The main opposition, which  has been saying that Prime Minister Madhav Kumar Nepal and senior leaders of the ruling parties have agreed to form a new unity government within five days of signing of the three-point deal on May 28, is miffed at the ruling parties.  “NC and UML betrayed our party by not implementing the three-point deal, which was supposed to be a beginning of consensual politics,” Maoist Chairman Pushpa Kamal Dahal said in a press release issued after the SC meeting.

A source close to the party said Maoist leaders will attend high-level meetings just for the sake of participating in meetings. “The NC and the UML do not want to make headway,” a standing committee member told the Post.

Flaying the government and the ruling parties, Dahal said they have no more desire, but to end the statute writing and peace processes. “Their recent remarks against the three-point deal have proved they are not sincere in accomplishing the historic task of writing a new statue,” the release said.  The party appealed to the people to stand against the government. It said its activities since the past one year show it doesn’t want to write the constitution.