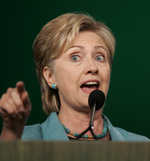 WASHINGTON – Fight against terrorism and nuclear security topped the agenda of India and the US as they set out the shape of a global partnership that US Secretary of State Hillary Clinton said “will shape the rest of this century.”

“The global nature of the security challenges that we face today, particularly the threat posed by transnational terrorism, requires us to cooperate more closely than ever before,” said External Affairs Minister S.M. Krishna as the two countries Thursday began their first ever strategic dialogue.

“Security is a top priority because both our nations have been seared by acts of terrorism on hour home soils,” Clinton said, outlining the contours of a partnership encompassing defence, education, energy, agriculture and climate change.

first responders to make our own homelands safe,” she said. The threat of trans-national terrorism requires both India and the US to cooperate more closely than ever before, though the epicentre of this threat lies in India’s neighbourhood, it reaches far and wide all across the world as witnessed recently a few weeks back in Times Square,” Krishna said without naming Pakistan, which remains a key concern of India.

“Given the fact that the groups who preach the ideology of hatred and violence are increasingly coalescing, sharing

resources and operating as one, it is incumbent upon all of us, to focus our efforts laser-like on every one of them.

Describing relationship with the US as one of the most important bilateral relationships, he said: “As India moves ahead

to achieve our priority tasks of economic and social transformation to allow our people to realize their full potential,

we have an increasing and well-justified stake in a stable international order”.

and beyond, and a tremendous opportunity is now before us to work together to achieve this objective,” Krishna said.

Another key area of bilateral dialogue is cooperation in high technology, he said noting that given the strategic nature

of their partnership and particularly the conclusion of the Civil Nuclear Initiative, export control restrictions “are not

“India is not only a rising global power, but it’s already a regional power,” Clinton said and “through this dialogue we

makes it possible for countries of Asia to rise and prosper and gives India a great role to participate.”

The US was also committed to the modernisation of India’s military as demonstrated by their defence trade, Clinton said

noting the US military holds the maximum number of joint exercises with the Indian Army.

proliferation, she said. Climate change was another item on Clinton’s priority list.

India’s rise will certainly be a factor in any future consideration of reform of UN Security Council, she assured like

The US side included Commerce Secretary Gary Locke, Federal Bureau of Investigation (FBI) Director Robert Mueller, and US