The interim CUNY chancellor William B. Kelly recently sent a letter  to the Board of Trustees regarding the September 17, 2013 demonstration against a fundraiser at Macaulay Honors College featuring “professor” David Petraeus and apologist for U.S. imperialism Fareed Zakaria.

The demonstration was organized by the Ad Hoc Committee Against the Militarization of CUNY, a united front in which the Revolutionary Student Coordinating Committee (RSCC) is a leading participant.

While the interim chancellor’s letter mentions the demonstration, it consciously neglects to address the brutality that the NYPD used in arresting demonstrators. Instead the letter claims that “a few demonstrators resisted police efforts, and six arrests were made.” The letter continues: “The university takes every measure to ensure that Dr. Petraeus was able to teach and conduct scholarly activities, without harassment or obstruction.” Further, the institution “-will not tolerate disruption of the free exchange of ideas and the essential work of the university.” This is a mischaracterization of not only the events of September 17, but of the campaign as a whole.

First, there is no mention that the protest was both peaceful and legal. The CUNY 6 (many who are RSCC members) did nothing to justify the intense violence employed by the NYPD.

Second, we are demonstrating against Petraeus as a symptom of the militarization process, not as an individual, nor because of his so-called “ideas” that he propagates in his so-called “class.” We are not infringing on his ‘free-speech’, but we are contesting his function in the academy as a symbol of U.S. imperialism.

Third, the bourgeois media have characterized our September 9 action against Petraeus as “harassment.” Due to the role that the media plays in reproducing social relations, they are unable to grasp that we are engaged in a militant struggle against a symbol of the repressive apparatus of the capitalist state in the age of imperialism.

The bourgeois media focus on our tactics rather than the domination and exploitation that proletarian, and oppressed people in the world face at the hands of U.S. imperialism, both at home and abroad. This focus results precisely from the fact that dominant ideology cannot assimilate the spectacle of proletarian students (largely drawn from oppressed nationalities), exercising their verbal power over the ex-General. Our refusal to submit to existing social relations is the only “crime” that is visible to this bourgeois media.

In order to defend our protest of September 17,  we only need turn to both videos capturing the the overt aggression initiated by the authorities along with the brutality that ensued, even when our comrades were down and not resisting. The evidence of police aggression is plain for all to see.

The Revolutionary Student Coordinating Committee does not analyze these attacks as a sign of the strength for the CUNY administration and the repressive forces protecting Petraeus.

On the contrary, the intensity of the police violence only discloses the weakening position of the CUNY administration and the bourgeois state.

We condemn the police attacks and we are undeterred by them.

PETRAEUS OUT OF CUNY!
DROP ALL THE CHARGES OF THE CUNY 6! 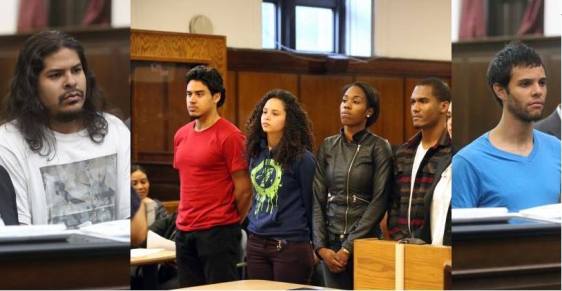