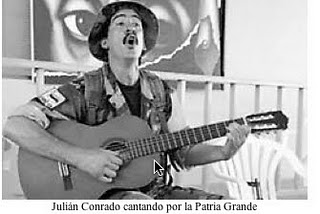 Rivera added that Torres was captured in Venezuela in a joint effort.

The rebel chief, also known as “the FARC singer” after his love for music, was captured last May 31 in western Barinas state, under an application filed by Colombia at the Interpol.

Rivera told reporters that Torres “was captured in Venezuelan territory by Venezuelan authorities, as a result of the cooperation with Colombia in the field of intelligence.”

“We were working together in this matter; we managed to identify and locate him, and Venezuelan authorities, in another evidence of such cooperation and of how this relation has changed for good, captured him there,” Rivera underscored.

Chávez is to call Santos to address FARC issue

8/3/11–The Venezuelan president said he was concerned about statements by Colombian high-ranking military officer Edgar Cely, who claimed that there are still FARC guerrillas in Venezuela

The president noted that on Wednesday the Colombian government clarified Cely’s statements about the alleged presence of FARC and ELN guerrillas in Venezuelan territory.

Chavez described as “very important” the clarification made by Colombian President Juan Manuel Santos, through his Defense Minister Rodrigo Rivera, who said on Tuesday that “at the present time there are no safe places or sanctuaries for the FARC criminals and terrorists to hide anywhere in Colombia’s neighbors.”

Rivera told Colombia media that “this issue is being handled by President (Santos) and the Foreign Ministry,” adding that “what was shown at the end of the government of President (Álvaro) Uribe is maintained.”

President Chavez welcomed the clarification by the Colombian government. “We were on the alert because of some weird statements by a Colombian senior military officer.”

Santos and Chávez have restored and improved Venezuela-Colombia relations ever since the Colombian president took power. Under Uribe, Chávez broke diplomatic ties with Colombia.

In recent months, Venezuela has captured in its territory several FARC leaders and ELN troops who have been extradited to Colombia. The affinity of the two presidents has resulted in several meetings and even a joint initiative to resolve the crisis in Honduras, Efe reported.