[Representatives of capital, and of modern capitalist-imperialism, have often claimed that their exploitative system has been a civilizing force, promoting and spreading democratic rights along with social and economic development wherever it has gone throughout the world.  These claims could not be further from the truth, as these masters of global plunder of human and all natural resources continue to force marginalized and desperately migrating peoples–peasants and proletarians alike–into the most dangerous conditions of slavery, enforced by the repressive regimes and the enslaving corporations they serve.  The following exposure by The Guardian exposes one aspect of this malevolent and highly profitable system, which then offers the inexpensive and tasty shrimp/prawn delicacies to unaware and/or uncaring consumers in imperialist countries. — Frontlines ed.]

Slaves forced to work for no pay for years at a time under threat of extreme violence are being used in Asia in the production of seafood sold by major US, British and other European retailers, the Guardian can reveal.

A six-month investigation has established that large numbers of men bought and sold like animals and held against their will on fishing boats off Thailand are integral to the production of prawns (commonly called shrimp in the US) sold in leading supermarkets around the world, including the top four global retailers: Walmart, Carrefour, Costco and Tesco.

The investigation found that the world’s largest prawn farmer, the Thailand-based Charoen Pokphand (CP) Foods, buys fishmeal, which it feeds to its farmed prawns, from some suppliers that own, operate or buy from fishing boats manned with slaves.

Men who have managed to escape from boats supplying CP Foods and other companies like it told the Guardian of horrific conditions, including 20-hour shifts, regular beatings, torture and execution-style killings. Some were at sea for years; some were regularly offered methamphetamines to keep them going. Some had seen fellow slaves murdered in front of them. END_OF_DOCUMENT_TOKEN_TO_BE_REPLACED

[“Some American officials are calling a trip to the mall an act of patriotism as the United States tries to rebound and rebuild.” went a common news refrain after 9/11/2001.  Today, “patriotic” consumers are enlisted into the hyperbolic fray between Microsoft’s X-Box One and the latest Playstation, a war on which one reporter commented: “by taking part in the rivalry, you’re doing little more than fighting on behalf of a massive corporation without benefitting at all yourself.”  Black Friday sales at Walmart and Target were successfully dominated by Microsoft’s X-Box One.  A satirical (Daily Currant) account of a frenzied example of  “Round One”, at Walmart in Chicago, is given below, and many who have heard this story believe it, because it rings true.  Unfortunately, there are many similarly frenzied but factual accounts of intense consumer fights over meaningless junk acquisition.  —  Frontlines ed.]
November 30, 2013, The Daily Currant

A woman was arrested today for stabbing to death three shoppers at a Chicago-area Wal-Mart in order to secure the store’s last X-Box One.

Mary Robbins, a married mother of two, reportedly wrestled her competitors to the ground before fatally wounding them with a sharpened Phillips head screwdriver.

The victim’s names have not yet been released, but are said to include a sociology student at Northwestern University, a chemistry teacher at at local high school and a young pregnant woman buying a system for her brother. END_OF_DOCUMENT_TOKEN_TO_BE_REPLACED 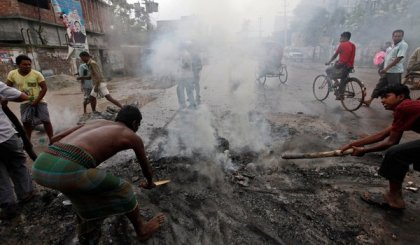 Residents cleaned up after fires were set in 2010 by garment workers in Ashulia, Bangladesh, who were demanding higher wages.

DHAKA, Bangladesh — A labor activist who was arrested two years ago for his role in protests against low wages in Bangladesh’s garment industry was found murdered outside this city last week, labor rights advocates and the police said on Monday.

The killing of the activist, Aminul Islam, marks a morbid turn in the often tense relations between labor groups, on one side, and Bangladesh’s extensive garment industry, which makes clothes for Western companies like Walmart, Tommy Hilfiger and H&M. In 2010, Mr. Islam, a former textile factory worker, was arrested and, he and other labor activists said, was tortured by the police and intelligence services.

Mr. Islam, 40, was last seen alive on Wednesday near Ashulia, a garment-industry hub outside Dhaka. His tortured body was found on Thursday on the side of a road near a police station in Ghatail, 61 miles to the north, according to the police and labor activists. END_OF_DOCUMENT_TOKEN_TO_BE_REPLACED 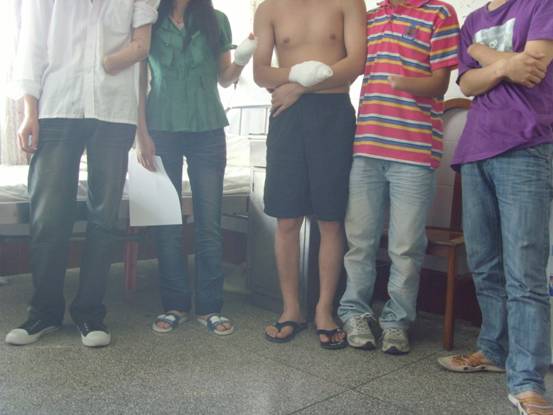 [In mid-August, advocates of workers’ rights and solidarity activists in Hong Kong released a shocking report on the oppressive factory conditions in China.  Elec-Tech, a major appliance manufacturer (and a key supplier of Walmart’s overwhelming dominance of the multi-billion dollar home appliance market) was regularly and routinely maiming and discarding workers on their unsafe production machines.  Courageous workers defied company threats and stepped forward to expose these conditions and the fact that many have lost limbs and faced discipline and been fired—with no compensation for their injuries and the crushing effect on their lives.

Once the story came to light, both Walmart and the Chinese government (having faced global rebuke from the Foxconn scandal) moved to avoid responsibility and distance themselves from Elec-Tech, which they blamed for the whole mess. Walmart “ordered” Elec-Tech to correct the safety hazards.  And the Chinese government-owned press issued the following news—in their internationally distributed English paper—to foreign readers, but published nothing in Chinese to their domestic Chinese readers.  (After this news article, see the initial reports from SACOM (Students and Scholars Against Corporate Misbehavior).-ed.]

At midnight on June 10 last year, a scream broke the monotonous echo of dozens of pounding molding machines at the Elec-Tech factory in Zhuhai, Guangdong Province.  “My palm is crushed!” a voice screamed.

It was Ruan Libin, a newly hired 21-year-old migrant worker from a village 800 kilometers away in Hunan Province. He had been working for a month but it was his fourth night shift and only the third time he had operated the 60-ton molding machine.

A great pain washed over Ruan. He felt dizzy for a moment, and then saw his blood all over the 3-meter tall machine that had suddenly crushed his left hand.

His colleagues, mostly in their early 20s, quickly surrounded him. Three minutes later, the head of a work unit arrived. He made a few phone calls, and helped Ruan walk to the factory gate. After another ten minutes, Ruan was finally helped into a factory-owned car. He sat in the car while his hand bled and hurt like hell. When he got to the hospital an hour later, Ruan almost lost consciousness.

But he remembered a scene that night in the hospital. He was put on an operating table, his eyes were covered with cloth. He heard the sound of sawing, it was quite rough as it sawed through something stubborn, and the room was filled with the smell of flesh and blood. That’s the moment Ruan knew that he lost his left hand forever. END_OF_DOCUMENT_TOKEN_TO_BE_REPLACED