SRINAGAR, India—Shops and businesses shut and road traffic was thin Friday across the Indian portion of Kashmir in response to a strike call by separatist groups to honor a pro-independence leader executed by India more than 25 years ago.

Police and paramilitary soldiers set up road checkpoints and banned assembly of more than four people to prevent protests in the Himalayan region, said a police officer on condition of anonymity as he was not authorized to speak to reporters.

Thousands of armed troops patrolled streets in Srinagar, the main city in Indian Kashmir, and other towns, while most public transport also stayed off the roads and the attendance was sparse in government offices. END_OF_DOCUMENT_TOKEN_TO_BE_REPLACED 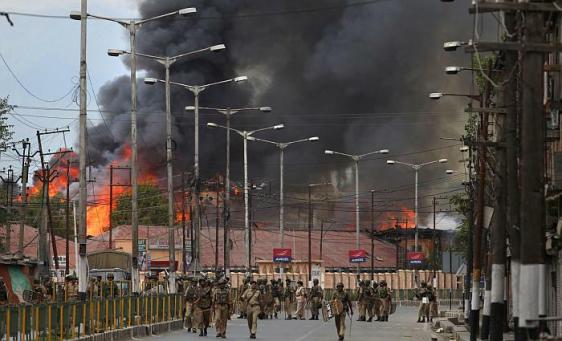 Sep 11, 2010 Forces patrol as flames rise from a government building set on fire by protesters in Srinagar. Police fired warning shots and tear gas to disperse hundreds of demonstrators who attacked a police post and burned government offices in Kashmir, as tens of thousands of people took to the streets chanting Azadi

Indian policemen chase Kashmiri mourners as the dead bodies of Muzaffar Bhat and Fayaz Ahamed Wani lie unattended on the ground during their funeral procession on the outskirts of Srinagar, India, Tuesday, July 6, 2010. Government forces fired on hundreds of rock-throwing protesters in Indian Kashmir on Tuesday, killing Wani and wounding two others as a seven-day curfew was lifted, locals and officials said. Bhat was allegedly killed by paramilitary soldiers Monday (AP Photo/Mukhtar Khan)

Security forces initially used tear gas to disperse the demonstrators, a police officer said on condition of anonymity because he was not authorized to talk to reporters. When that failed, paramilitary soldiers opened fire with live ammunition, he said.

Fayaz Ahmed Wani, a 35-year-old protester, was killed and two others were wounded, the officer said.

Protests against Indian rule in the Himalayan region have grown increasingly strident in recent weeks with Kashmiri people accusing government forces of killing at least 15 people during street demonstrations. The recent unrest had prompted authorities to impose a curfew in most parts of Kashmir.

As the news of Wani’s killing spread, separatist activists in the main city of Srinagar used the public address systems of mosques asking people to join the protest.

“Our protests and civil disobedience will continue until India withdraws its military and paramilitary soldiers from all populated areas,” said Mirwaiz Umar Farooq, a key separatist leader who led thousands of marchers in downtown Srinagar.

Carrying black and green flags, the protesters chanted “Go India, go back” and “We want freedom” as they marched through the streets.

The curfew was lifted Tuesday until the latest clashes in Srinagar prompted authorities to enforce it again. END_OF_DOCUMENT_TOKEN_TO_BE_REPLACED

Rocky road: Aggressive protests in the valley have become common in recent times and protestors retort with stones to every bullet of securitymen.

SRINAGAR, July 5 (Bernama) — Curfew was re-imposed on Monday in Muslim dominated areas of India-controlled Kashmir including Srinagar to prevent a separatist rally to Anantnag town, Press Trust of India (PTI) quoted officials and locals as saying.

“We have imposed restrictions to maintain law and order,” said a government official posted in Srinagar.

The severe restrictions were re-imposed following a break on Sunday. The authorities Sunday morning lifted restrictions from almost all the areas except Anantnag town where tension is still palpable. END_OF_DOCUMENT_TOKEN_TO_BE_REPLACED