Over the past week, the protesters in Hong Kong have focused on well-defined political demands, with full democratic elections and the resignation of Chief Executive C.Y. Leung at the top of the list. But protesters have also been driven to the streets by a variety of longstanding grievances, many of which stem from the economic inequality which has built up in Hong Kong society, putting the city at the top of The Economist’s “crony-capitalism index,” or list of “countries where politically connected businessmen are most likely to prosper.” The gini coefficient, which measures the gap between rich and poor, is at the highest levels ever for Hong Kong, according to a 2013 report from Bloomberg:

Hong Kong’s Gini coefficient, a measure of income inequality, rose to 0.537 in 2011 from 0.525 in 2001, the government said last June. The score, a high for the city since records began in 1971, is above the 0.4 level used by analysts as a gauge of the potential for social unrest.

Hong Kong’s close business ties to mainland China, especially since the handover in 1997, have exacerbated these inequalities. But as the recent protests show, economic issues are quickly becoming political for residents of Hong Kong who are missing out on the boom. Neil Gough reports for the New York Times:

China is grappling with a political problem in part because Hong Kong is dealing with an economic one. Underlying the current unrest in Hong Kong, an affluent city of 7.2 million that was a British colony for 155 years before it was returned to China in 1997, is a widening wealth gap. END_OF_DOCUMENT_TOKEN_TO_BE_REPLACED

Women prisoners reveal the shocking conditions of their confinement –custodial violence, which has no sanction under law, is a part and parcel of the system

Following a minor altercation with the warden in Ward No. 8 of Tihar Jail, Zohara Baratali received severe blows on her lower abdomen that made her bleed for a full month before she succumbed to her injuries. That was a decade ago.

Last year, unable to bear the trauma of being stripped, beaten and sexually assaulted by three policemen inside Pratap Nagar Police Station in Jaipur, Seema Singh tried to end her life by jumping in front of a train. She did not die, but became a paraplegic for life. That did not deter the authorities from arresting her. Last week, the hearing for her bail application was adjourned, yet again.

The All India Meet on Women Prisoners & Custodial Violence held in Delhi on the weekend threw light on the plight of women prisoners in the country. Custodial violence, which is illegal and has no sanction under law, is a part and parcel of the system, with Soni Sori’s case having brought it into the forefront. The speakers shared their concern over the use of women’s sexuality to torture and criminalize them, with police reports usually mentioning these women as those with ‘low’ character. According to them around 99.9 per cent of women prisoners in the country belong to the backward Dalit, Adivasi and minority communities.

Trade Union activist Anu said, “The class divide runs deep in jails. If you are dressed well and look affluent, you won’t be asked to do a lot of the work. But others have to be on their feet all the time, even an 80 year old woman is not spared.” Speaking of her days in Tihar Jail, Anu said that the moment one enters the jail, even as an under trial, the perception is that the person is a criminal and an atmosphere of fear is created. Violence and abuses are a part of that fear psychosis. END_OF_DOCUMENT_TOKEN_TO_BE_REPLACED 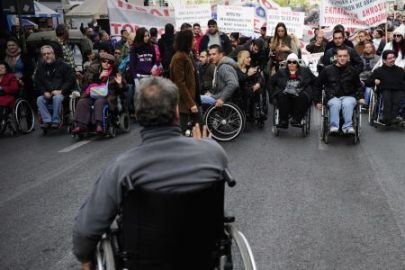 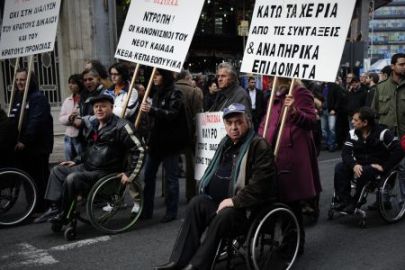 13 December 2011 — More than a thousand of disabled people protested against government cuts and their impact on key benefits such as the disability living allowance, and disability pension.
Waving placards with slogans such as “No to dismantling the welfare state” and “Protect disabled from the misery, poverty and exclusion”, disabled people took to the streets of Athens center to protest at the government’s spending cuts.

The protesters, many of whom had never been on a demonstration before, included people who are virtually immobile with supporters, relatives, charities and friends.

In front of the Greek Parliament Riot Police closed the road not allowing them to go near the Prime Minister Hall, where they wanted to deliver their requests.