[Ethnic and racial profiling has always been a central feature of US economics, politics, culture, and forceful repression.  From Africans on slave plantations, to American Indian wars and displacement, to the “Chinese Exclusion Act” the pattern is unbroken.  80 years ago this month, 500,000 Mexicans and US-born Chicana/o citizens were deported to Mexico, in a series of “El Repatriado” deportations of, eventually, nearly two million–after being falsely blamed for “taking American jobs” during the collapse of the capitalist economy known as The Great Depression.  70 years ago, 120,000 Japanese Americans were rounded up and placed in concentration camps after being falsely accused of loyalty to the Japanese Emperor during WW2.  Now, adding to these and many such reprehensible traditions, Islamophobia has become a feature which the police state is boasting about, as it destroys the human rights of privacy, speech, and association of millions of Muslims now subjected to hostile surveillance and stalking–amidst false claims of inherent Muslim criminality and terror.  — Frontlines ed.] 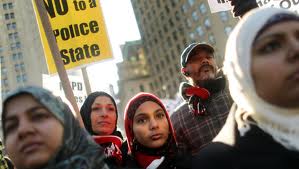 NEW YORK — The New York Police Department targeted Muslim mosques with tactics normally reserved for criminal organizations, according to newly obtained police documents that showed police collecting the license plates of worshippers, monitoring them on surveillance cameras and cataloging sermons through a network of informants.

The documents, obtained by The Associated Press, have come to light as the NYPD fends off criticism of its monitoring of Muslim student groups and its cataloging of mosques and Muslim businesses in nearby Newark, N.J.

Browne, forcefully defended the legality of those efforts Thursday, telling reporters that its officers may go wherever the public goes and collect intelligence, even outside city limits.

The new documents, prepared for Police Commissioner Raymond Kelly, show how the NYPD’s roster of paid informants monitored conversations and sermons inside mosques. The records offer the first glimpse of what those informants, known informally as “mosque crawlers,” gleaned from inside the houses of worship. END_OF_DOCUMENT_TOKEN_TO_BE_REPLACED