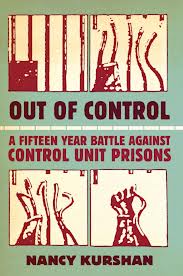 Out of Control: A Fifteen Year Battle Against Control Unit Prisons, by Nancy Kurshan

–An interview with author/activist Nancy Kurshan

Author and longtime activist Nancy Kurshan’s new book, entitled Out of Control: A Fifteen Year Battle Against Control Unit Prisons , has just been released by the Freedom Archives . Kurshan’s book documents the work of The Committee to End the Marion Lockdown (CEML), which she co-founded in 1985 as a response to the lockdown at the federal prison in Marion, Illinois. It quickly turned into a broader campaign against control unit prisons and human rights violations in US prisons that lasted fifteen years, until 2000. The following excerpt from Out of Control details CEML’s origins:

I had been living in Chicago for about a year when I heard the news that two guards had been killed by two prisoners in the U.S. Penitentiary in Marion, Illinois, 350 miles south of Chicago. Although it was an isolated incident with no associated riot conditions, the prison was immediately placed on lockdown status, and the authorities seized on the opportunity to violently repress the entire prison population. For two years, from 1983 to 1985, all of the 350 men imprisoned there were subjected to brutal, dehumanizing conditions. All work programs were shut down, as were educational activities and religious services.

During the initial stage of this lockdown, 60 guards equipped with riot gear, much of it shipped in from other prisons, systematically beat approximately 100 handcuffed and defenseless prisoners. Guards also subjected some prisoners to forced finger probes of the rectum. Random beatings and rectal probes continued through the two-year lockdown. Despite clear evidence of physical and psychological brutality at the hands of the guards, Congress and the courts refused to intervene to stop the lockdown…

…Although the terrible conditions at the prison were striking, what drew us to Marion in particular was the history of struggle of the prisoners and their allies on the outside. When the infamous Alcatraz was closed in 1962, Marion Federal Penitentiary was opened and became the new Alcatraz, the end of the line for the “worst of the worst.”

In 1972 there was a prisoner’s peaceful work stoppage at Marion led by Puerto Rican Nationalist Rafael Cancel Miranda. In response to this peaceful work stoppage, the authorities placed a section of the prison under lockdown, thus creating the first “control unit,” essentially a prison within a prison, amplifying the use of isolation as a form of control, previously used only for a selected prisoner. That was 1972.

At this time, in 1985, after two years of lockdown, they converted the whole prison into a control unit. Importantly, because Marion in 1985 was “the end of the line,” the only “Level 6” federal prison, there were disproportionate numbers of political prisoners—those who were incarcerated for their political beliefs and actions. These included people such as Native American Leonard Peltier who had spent years there until recently, and now (in 1985) Black Panthers Sundiata Acoli and Sekou Odinga , Puerto Rican independentista Oscar López Rivera , and white revolutionary Bill Dunne . These were people we knew or identified with, activists of the 1960s and 1970s incarcerated for their political activities. Marion, like its predecessor Alcatraz and its successor ADX Florence, was clearly a destination point for political prisoners. END_OF_DOCUMENT_TOKEN_TO_BE_REPLACED

[In the US, between 6 and 7 million people–overwhelmingly black and brown–are subject to the controls and conditions of the “judicial” system.  Of these, two million, five hundred thousand are confined to jails and prisons, and hundreds of thousands more in indefinite “ICE” detention centers.  Over eighty thousand are confined in solitary confinement and SHUs–special arrangements to deprive prisoners of human contact, usually 23 hours a day.  From these conditions, prisoners have been organizing campaigns and hunger strikes in protest , determined to get the word out, determined to fight for their own humanity.  Susan Greene, an investigative reporter, examines these tortuous conditions. — Frontlines ed.]

An investigative look at solitary confinement

A few weeks ago, on the fifteenth anniversary of his first day in prison, Osiel Rodriguez set about cleaning the 87 square feet he inhabits at ADX, a federal mass isolation facility in Colorado.

“I got it in my head to destroy all my photographs,” he writes in a letter to me. “I spent some five hours ripping each one to pieces. No one was safe. I did not save one of my mother, father, sisters. Who are those people anyway?”

Such is the logic of the gray box, of sitting year after year in solitude.

Whether Rodriguez had psychological problems when he robbed a bank, burglarized a pawn shop and stole some guns at age 22, or whether mental illness set in during the eight years he has spent in seclusion since trying to walk out of a federal penitentiary in Florida – it’s academic. What’s true now is that he’s sick, literally, of being alone, as are scores of other prisoners in extreme isolation.

Among the misperceptions about solitary confinement is that it’s used only on the most violent inmates, and only for a few weeks or months. In fact, an estimated 80,000 Americans — many with no record of violence either inside or outside prison — are living in seclusion. They stay there for years, even decades. What this means, generally, is 23 hours a day in a cell the size of two queen-sized mattresses, with a single hour in an exercise cage, also alone. Some prisoners aren’t allowed visits or phone calls. Some have no TV or radio. Some never lay eyes on each other. And some go years without fresh air or sunlight. END_OF_DOCUMENT_TOKEN_TO_BE_REPLACED

The situation has parallels to the USA, which has the largest prison population ratio to the total population in the world, and has political prisoners who have been in jail for more than thirty years, from the time when the Black population of the US stood up in struggle for their rights. In the following article, the author Isaac Ontiveros of the Prisoner Hunger Strike Solidarity Condition writes about the recent historic hunger strike by prisoners in California prisons, which had focused attention on the US prison system and the condition of prisoners therein. This hunger strike, which at one point had 12000 participants throughout the California prison system, exposed the inherent repression, maltreatment and misery of the prisoners in the US prisons and became a symbol of resistance against these.

In India, over the last one year there have been many hunger strikes in prisons, led mostly by political prisoners in various jails, although they have never received any media attention as the hunger strike by Anna Hazare did. As the aggression by the Indian state against its own people continues, and as resistance builds against it, India has come to have one of the largest political prisoner populations. Draconian central laws such as the UAPA, and various state laws have been used to incarcerate a large number of political activists in various jails [for example, this letter from the incarcerated Chhatradhar Mahato, from Midnapur jail in West Bengal, details the inhuman condition of political prisoners there and the resistance]. Together with these, application of various sections of the Criminal Penal Code (CrPC) has resulted in a large number of cases, in most instances false, against people who have resisted or protested in any form against the aggression by the state or corporations. And just as the US prison population has a disproportionately large number of African-Americans and Hispanic people, who form the most downtrodden and marginalized sections of the American population, the political prisoner population in Indian jails has a disproportionately high number of adivasis and dalits, who have borne the brunt of the repressive state policies.

For example, amongst the 250 odd political prisoners in Midnapore central jail, around 240 are adivasis of all ages and gender. The political prisoners have gone on hunger strike a number of times in jails in West Bengal, demanding better treatment and better facilities for all prisoners, and for the recognition of their status as political prisoners. Even that has been hard to come by, both during the previous Left Front regime and the new Trinamool Congress government which had promised to release the political prisoners before the polls.

The author works on the media committee of the Prisoner Hunger Strike Solidarity coalition.

The California Hunger Strike: Repression, Resistance, and the US Prison System

This past summer, at least 6,600—probably many more—prisoners in the US state of California’s prison system went on hunger strike. After more than 20 days, prisoners suspended their strike when prison administration was forced to respond. Then, in late September, because repression had increased, and there was no movement on their demands–and reprisals were targeted against those labeled as strike leaders, the prisoners resumed their strike. The second round of striking, which lasted nearly three weeks, at one point had at least 12,000 participants throughout California. Both waves of the strike were initiated in the Security Housing Unit (SHU) of the notorious Pelican Bay State Prison.

SHUs are some the highest security facilities in the United States—often referred to as “prisons within prisons.” Prisoners are kept in solitary confinement for 22 hours a day in eight by ten feet cells made of smooth concrete that have no windows. Fluorescent lights can be kept on 24 hours per day. Armed guards control entrances and exits electronically and are strategically located to be able to fire on prisoners at any time. The average amount of time a prisoner spends in the Pelican Bay SHU is 6 ½ years, while some have been held for over 20. Around 4,000 prisoners in California are held in SHUs. Nationally, it is estimated that 80,000 people are held in some form of solitary confinement. Many organizations internationally have condemned SHUs and other solitary confinement facilities as torture. In California and elsewhere, prison administrators claim that prisoners are kept in these special units because they are high level gang shot-callers, yet many have pointed out that, in fact, the SHUs are often used to break up organizing for prisoner’s rights. END_OF_DOCUMENT_TOKEN_TO_BE_REPLACED