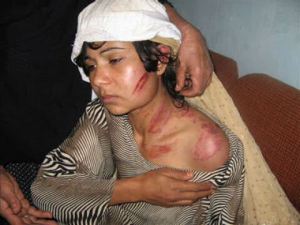 This young woman was violently attacked for appearing in public without a male--a violation of the strict Sharia law enforced by the US-supported Karzai regime.

Recent  reports by both human rights groups and Afghan officials indicate that violence against women in Afghanistan is on the rise and that this has been the trend since the beginning of the occupation of Afghanistan by the U.S. and other Nato countries.

A report published in April 2009 by the women’s rights organisation Womankind said that 80 percent of Afghan women suffer from domestic violence. Other reports put this figure as high as 87 percent. Afghan minister of women’s affairs Hassan-Banu Ghazanfar recently said that it effects 90 percent.

November 25 marked the International Day for the Eradication of Violence Against Women. This violence is global and not particular to Afghan women. In the world as a whole the vast majority of women face violence in one or another serious form during their their lifetime. The facts about violence against women even in the most developed countries are shocking. Rape, physical and sexual abuse by the husband or boyfriend, harassment and worse at work places, the trade in women and sex slavery are only some of forms of anti-woman violence. These facts suggest that this is not just a remnant of the past but that world capitalism even in its most developed stage is a source of oppression, discrimination and violence against women.

So there is not single country in the imperialist-dominated  world where women have escaped from oppression and violence. This article focuses on Afghanistan not only because these women have suffered severe oppression by the various fundamentalist rulers over the last three decades, and not only because the level of violence and other sorts of oppression is so extreme, but also because the imperialist powers have occupied the country under the pretext of liberating Afghan women. END_OF_DOCUMENT_TOKEN_TO_BE_REPLACED