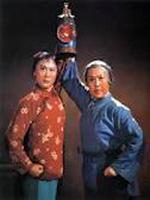 The Red Lantern: A Precious Gift

By: Rishi Raj Baral, The Next Front

After the 30 days of  National Convention, Comrade Mohan Baidhya ‘Kiran’, Chairman of  newly formed Communist Party of Nepal- Maoist, is leaving Kathmandu for China on  Sunday, 15 July. ‘Communist Party of China’ has invited him for 10 days  trip.   It is his 1st visit to China as a Chairman of the Party. Three years ago, he had accompanied with Prachand, along with  Comrade Biplav and the corrupted man of dual character, business partner of Prachand- Krishna Bahadur Mahara.

Yes, the visiting schedule and agendas have not publicized. But it is known to us that the Chinese will raise the question about the use of the terminology ‘Maoism’. They will advise Comrade Baidhya to remove it  from the Party’s  Document, because they have already asked this question on Mr. Ai Ping’s trip to Nepal. They will also try to convince Baidhya  for the  Party unification with Prachanda- the traitor.  Because they had already raised this issue also in Ai Ping’s visit. Finally they will  affirm their deep concern on ‘Free Tibet” issue, not on Nepal’s  New Democratic Revolution. And Comrade Baidhya will come back  with a new branded Laptop computer. END_OF_DOCUMENT_TOKEN_TO_BE_REPLACED

It is a  matter of deep sorrow that the reactionary Indian  government has murdered Comrade Kisanji  alias Malloujula Koteswara Rao, Politburo Member of CPI (Maoist), in a fake incounter in Burishol forest area, west Midnapore District, Jangalmahal, West Bengal on 24 November 2011. He was a leading figure and spokesperson for CPI (Maoist) . According CPI (Maoist) statement issued to the media,  Kishanji  was arrested and tortured and then brutally killed.

Comrade Kissan is not unknown to us. We have already published his interviews in Nepalese magazines. In this moment, our Revolutionary Cultural-Intellectual Front strongly condemns the cold-blooded murder of Comrade Kisanji -a true revolutionary hero of the oppressed people of India.  And we urge to  all intellectuals and cultural activists of this region to denounce this cowardly killing of Comrade  Kisanji by the Indian reactionary forces.

Yes, it is true Comrade Kishanji died for the people, and his death is indeed weightier than Mount Everest. From the bottom of our hearts we express our Red Salute to the people’s hero  Comrade Kisanji .

The Indian reactionary government has murdered Comrade Kisanji, but not his ideology. They can’t kill Marxism-Leninism and Maoism. The movement will continue, the revolution will continue.

We know the reactionary government of Nepal, an  Indian Puppet government led by Baburam Bhattarai and Prachanda, a new avatar of  Samanta (Fedual) will not denounce it. Now they are turned into the real traitor of Indian expansionism.  But we, the revolutionary intellectuals and  the  political activists who fought ten years People’s War and who are still fighting for the people’s liberation, are always with the brave communist fighters of India, oppressed people of India. In fact, the hundreds of millions of oppressed people of the world, who dream of liberation, are always with the oppressed people of India.  The red flag of revolution will not be bent down. The long march of revolution will not be stopped. Let us march ahead.

[We have received this commentary on the recent actions in Nepal taken by Pushpa Kamal Dahal ‘Prachanda’; the comments should be read in light of the very intense struggle between parliamentary/electoral and revolutionary strategies.  This struggle has become more public and more intense, and indications are that it may be reaching its conclusion soon. — Frontlines ed.]

Those who have keen interest in the current activities of United Communist Party of Nepal (Maoist ), are not unaware of  the two line struggle running within the party.  It is known to all that since three years a massive two line struggle is going on between the top leaders.  After passing the document of Prachanda, centered on ‘peace and constitution’  the political and ideological polarisation within the party  has changed. Now  Dahal and Bhattarai are in the same boat and they are rowing the boat down to the southern pole.

Recently, in an interview given to a daily news paper (it is also posted in  thenextfront.com) Kiran expressed the view that Prachand has declined to lead the struggle, has deviated from the revolutionary line and is betraying the revolution. But in that interview, there are some controversial  issues too. In one place, he expresses the betrayal of revolution by Prachand and in another place, he expresses his faith on Prachand’s leadership. As he says: I think Dahal has to be at the frontline to complete the revolution. It has created a lot of confusion. It needs clarification and justification. END_OF_DOCUMENT_TOKEN_TO_BE_REPLACED

[This article by Rishi Raj Baral is a detailed commentary on the recent and current events within the Maoist party in Nepal, the UCPN(M),  on the occasion of the current central committee meeting.  This meeting will, by many accounts, bring to an end the two-line inner-party struggle.  This struggle over strategic line and direction has been conducted over the years since the conclusion of the People’s War (five years ago) and its replacement by the Comprehensive Peace Agreement to share governmental administrative power with the bourgeois parties.  This article provides a detailed narrative of events leading to the present, and provides the author’s assessment of the juncture now reached. We urge all friends of the revolution in Nepal and all concerned about this juncture for the international movement, to study this article. — Frontlines ed.]

The central committee meeting of UNCP( Maoist) is going on and there is a sharp debate and discussion upon the document of Pushpa Kamal Dahal and Comrade Mohan Baidhya. In the name of party’s decision Dahal group may succeed to gain the technical majority. Then it is clear, it will be the betrayal of the revolution and deceit to the party workers and cadres.Now, it is crystal clear that there is nothing but a little bit faith on revolution in the mind of Pushpa Kamal Dahal. After all  ‘Prachanda’ came out in his real color. 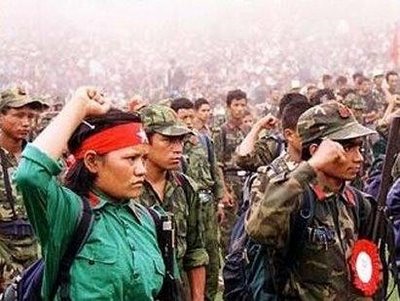 Before the PLA ceased military operations in 2006, the people's war was successfully leading the peasantry in over three-fourths of the country, breaking the chains of feudal oppression and beginning to establish the instruments of popular governance and power.

Chunwang meeting was not only a predetermined plan to abandon revolution, the people’s war but also was the abandonment of Marxism–Leninism and Maoism. In fact, Chunwang meeting was the preparation for bourgeois political system and  so called democracy. It also proved that Prachanda can adopt and accept every thing, is even ready to make close contact with the reactionary powers outside the country for the sake of his own interests and for exercising power. It has been clear that he will not hesitate even to betray the heroic and sacrificial history of the Nepalese people for his personal interest and power. It is obvious that his slogan of nationalism and national independence is a mere show and a rubbish propaganda. Publicly, he opposes the Indian expansionist, but in reality he is the supporter of Indian expansionist.

In the name of creativity, Prachanda is always thinking of ways to gain more power. Like a chameleon changing its color, sometimes he pretends himself as a revolutionary and becomes close to revolutionary leaders within the party and sometimes he becomes close to reformists and revisionists (most of the time he makes his closeness to the reformists and revisionism of the party)  within the party to remain constantly in the party leadership. There should not be any confusion that in general, Prachanda seems to be a centrist–opportunist but in fact, he is a rightist– reformist. During the people’s war, after the conspiratorial capture of Comrade Mohan Baidhya, Prachanda enjoyed his time with the revisionists of the party. Then he compromised with Indian expansionists. END_OF_DOCUMENT_TOKEN_TO_BE_REPLACED