Poetry is an open secret
That destroys the disquiet
Stirring in my heart.
It reaches in a trice
Those it is meant to reach.
Suddenly the ones who need to,
Will understand.
Rising in my thoughts,
It inspires movements.
The secret is,
My poetry was born
From the pangs of struggle.
Cover it if you must –
You will see it escape through
The spaces of your fingers,
Its vibrant, anguished notes
Snapping in anger,
Setting tears on fire
And flowing forth –
A river of blood-red syllables. 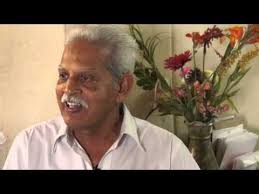 Varavara Rao is a communist, activist, naxalite sympathiser, renowned poet, journalist, literary critic, and public speaker from Telangana, India. He has been writing poetry for the last four decades.

You all know about the Forum for Political Alternative’s (FPA) today’s (21.09.2014) Meeting at Sundaryya Vignana Kendram, Baghlinganpalli , Hyderabad from 11am …. To Disturb the meeting the police of Telangana i.e, KCR’s government arrested members of FPA… Arrests were started from midnight …. So far they have arrested – Com. Padmakumari, Jiten Marandi, Pani, Varalakshmi, Chiluka Chandrasekhar, Devendra, Anjamma and her children, Many others were picked up from Secunderabad Railway station, on the way to Hyderabad itself…. Morning at 6.25am they have arrested Com. Varavararao … Arrests are going on… Let us Condemn this… Let us fight for the release of our Friends and Comrades… Let us Fight for the Freedom of Expression !

Shamefully the historic programme commemorating 10 years of the revolutionary movement by the Forum for Political Alternative’s (FPA) in Hyderabad was curtailed,with activists detained who were arriving for the meeting. depicting the true nature of the state.It depicts how the bourgeois democratic projection of the state is a garb .We must all raise our voices against this heinous act.Revolutionary democrat Varavara Rao has done exemplary work in the Revolutionary writers association and exposed the state repression on democratic movements.Inspite of permission the meeting was sabotaged.It is a mere illusion that we have a bourgeois democratic state.All over India , in every nook and corner of the world this attack should be exposed and the people educated on it’s significance.It has to be explained how in the name of supressing ‘Maoism’ the state tramples on people’s rights.The ruling government has trampled upon the civil rights of the people.
by Harsh Thakor