[The IMF and the World Bank are key instruments of the finance/montary/credit-debt management of the entire world.  Enacted at the end of WWII to establish US leadership of the world imperialist system, both IMF and WB have come under endless criticism and challenges over the decades, but the emergence of new imperialist powers from post-socialist Russia and China has posed historically-contending  blocs-in-formation as unprecedented dangers to the once-presumed “permanent” US hegemony.  Both IMF and WB have become increasingly tattered and less effective instruments, as challenges have grown.  Congressional reforms aimed at a more durable structure for the IMF are hailed by the media-of-empire NY Times in the following editorial, which writes, strategically, ‘If the fund and the World Bank are to remain relevant and be truly global organizations, they cannot be seen as European and American fiefs.’ — Frontlines ed.]

Congress Gets Out of the I.M.F.’s Way

The House went into holiday recess after passing a measure that included ratification of International Monetary Fund reforms.

After five years of Republican foot-dragging, members of Congress last week ratified an agreement that will increase the capital of the International Monetary Fund and give developing countries like China and India a greater say in the organization.

This should strengthen the fund at a time when its expertise is needed to help revive a slowing global economy. In 2010, the Obama administration negotiated an agreement with other countries to double the I.M.F.’s capital to about $755 billion, so it could lend more money to troubled countries like Greece and Spain. The changes also gave more voting power in the fund’s management to China, India, Brazil and Russia while slightly reducing the clout of European countries and the United States. END_OF_DOCUMENT_TOKEN_TO_BE_REPLACED 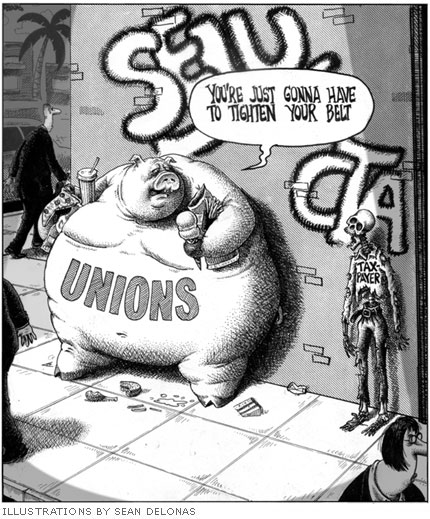 Election-year media images echo Democratic and Republican politicians alike, blaming the suffering of taxpayers on "fat" public workers (and too many government services)

[While this article proposes the reformist false solution of “tax the rich”, it contains useful exposure of the ruling class’s attacks on public employees.-ed.]

States everywhere across the United States are facing the common enemy of extreme budget deficits. Many states have deficits in the multi-billion dollar realm, as the budget crises dominate the debates for the upcoming gubernatorial elections. In these debates, Republican and Democratic candidates are finding it difficult to disagree on the most essential issues around the budget crises. The most crucial question for any incoming governor must be: how will you resolve the state’s budget crisis? The answer from both parties is a resounding: “Public workers and those who depend on their services will pay for the crisis”! END_OF_DOCUMENT_TOKEN_TO_BE_REPLACED