[The New York Times reports the Brazilian power elite’s attempts to attribute “blunders” — not mass resentment at religious and political arrogance, extravagance, and brutal repression — for the obvious breakdown of bourgeois authority and credibility in social and political life. — Frontlines ed.] 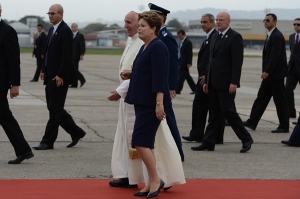 Pope Francis with Brazil’s President Dilma Rousseff. Pope Francis, with a long history of support for repressive powers in Latin America, became an object of the ongoing mass protests against Dilma Rousseff’s corrupt and repressive regime — an unintended consequence of a visit planned to “fan the fervor of the faithful” and to distract the anger of the oppressed.

RIO DE JANEIRO — Pope Francis celebrated his first public Mass on Wednesday at one of Latin America’s largest shrines, asking Catholics to shun the “ephemeral idols” of material success, power and pleasure, but his visit to Brazil continued to be marked by tension over blunders by its Brazilian organizers.

The missteps began minutes after Francis arrived in Rio on Monday, when his small motorcade got stuck on a crowded thoroughfare, exposing the pope to a mob scene of people trying to touch him through the open window of his car. On Tuesday, Rio’s subway system broke down for two hours, leaving thousands gathered here for a conference of Catholic youth scrambling to reach a seaside Mass.

Rio’s political authorities have also faced scrutiny over their handling of street demonstrations around the pope’s visit. They acknowledged using undercover agents to infiltrate the protests but denied claims that their intelligence officers were to blame for violence, including the throwing of firebombs. END_OF_DOCUMENT_TOKEN_TO_BE_REPLACED