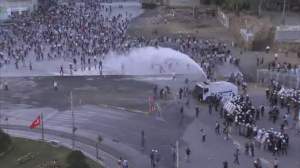 Police push back against thousands of protesters in Istanbul as unrest returns to the city’s Taksim Square.

Riot police have fired water cannon to clear protesters from Istanbul’s Taksim Square, in the first clash at the site for nearly a week.

The demonstrators had converged at the square for a memorial to those killed in nearly three weeks of anti-government protests.

The protesters laid carnations and shouted anti-government slogans in remembrance of three protesters and a police officer killed in the unrest. END_OF_DOCUMENT_TOKEN_TO_BE_REPLACED