The barb between the hardliners and the party establishment within the UCPN (Maoist) saw a new level of intensity on Wednesday as hardliners hurled personal broadside against party Chairman Pushpa Kamal Dahal, calling him a “comprador” and a “sell-out”. During the ongoing Central Committee (CC) meeting of the party on Wednesday, not even Prime Minister Baburam Bhattarai was spared from personal attacks. According to some leaders, the attack was one of fiercest in the party’s internal deliberation since the party entered peaceful politics in 2006.

“Dahal and PM Bhattarai are working under the guidance of expansionist and imperialistic forces, the signing of BIPPA is a classic example of it,” said Ram Bahadur Thapa, party general secretary and leader of the hard-line camp, in the meeting. He also accused Dahal of compromising with other parties on the core issues of constitution drafting in the dispute resolution subcommittee formed under the Constitutional Committee.

The group of four in the hard-line camp—Thapa, CP Gajurel, Dev Gurung and Netra Bikram Chand ‘Biplav’—used words such as “comprador”, “rightist”, “reformist”, “individualistic” and “feudal” to describe Dahal and Bhattarai during the deliberation. The leaders threatened to split the party, arguing that there was no point in staying together if the party leadership didn’t change itself. They said ideology and people were more worthy for them than the party. END_OF_DOCUMENT_TOKEN_TO_BE_REPLACED

[The Revolutionary Maoists led by Vice Chairman Mohan Baidya are leading the fight against the “establishment ‘Maoists'” (Bhattarai and Dahal/’Prachanda’) who have reneged on their revolutionary oath to landless peasants and Dalits and agreed to return the lands which had been seized from vicious, abusive, and absent landlords during the People’s War and were redistributed to peasant farmers. — Frontlines ed.] 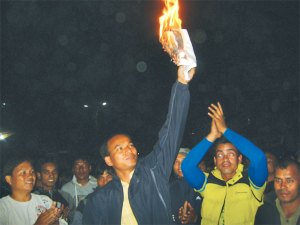 KATHMANDU, NOV 07 – The Maoist hardline faction led by Vice-chairman Mohan Baidya and party establishment camp are at odds over returning property seized or occupied by the party.

Return of property seized or occupied by the Maoists was one of the key points agreed to in the seven-point deal signed on November 1. The Baidya faction has, however, said it will resist every effort that is made to take away the land from the poor farmers and the landless.

A day after UCPN (Maoist) Chairman Pushpa Kamal Dahal issued a circular to the party’s lower organisations directing cadres to assist in the process of returning seized property, a gathering of the Baidya camp in the Capital on Sunday directed its activists to thwart the ‘takeover’.

“We will retaliate if anyone tries to take over the land from the farmers,” said Maheshwor Dahal, the Maoist central committee member of the Baidya faction. END_OF_DOCUMENT_TOKEN_TO_BE_REPLACED