The Oakland Palestine Solidarity Mural adopts the image of the tree as a central motif and global visual signifier of life and resilience to link seemingly disparate issues and distant locations. Spanning 157 feet and reaching 22 feet high, the mural is comprised of nine separate panels, where each artist or team has painted his or her own interpretation of a tree to address social and political issues. These issues include the shared histories of colonization, environmental exploitation, internal exile of indigenous peoples, resilience and resistance to these injustices. The result is a stunning public tribute to the human spirit and its unassailable right to thrive in spite of political oppression and injustice–wherever it is taking place in the world.

Huge billboards were put up to announce Israeli Apartheid Week. Durban-based GangsOfGraffiti inspired fellow street artists and graffiti writers to participate by creating works with “Free Palestine” as the theme. On walls in several cities, artwork appeared in support of IAW and boycott activism. In thirteen towns around the country, the film Roadmap to Apartheid was screened, including all major cities and in Soweto (“National film tour, 5-11 March 2012,” BDS South Africa ).

According to an article in The Jerusalem Post, the Israeli “Public Diplomacy Ministry” had sent a delegation to South Africa to “battle the apartheid label,” but Israel’s messengers did not succeed in changing the perception held by many South Africans that Israeli apartheid is similar to apartheid in South Africa (“Envoys to fight Israel Apartheid Week on campus,” 19 February 2012).

Fatima Gabru of the Palestine Solidarity Forum qualified the public relations exercise as “a stalling technique so that they [Israel] can continue with what they are doing: throwing Palestinians off their land, building walls, continuing human rights abuses” (“South Africa highlights Israeli apartheid,” Press TV, 9 March 2012). END_OF_DOCUMENT_TOKEN_TO_BE_REPLACED

‘Occupy AIPAC’ to take on lobby’s legions in ‘business attire’

This spring, Move over AIPAC will mobilize as “Occupy AIPAC,” returning to Washington D.C., to protest the Israel lobby’s national conference. AIPAC is known for strong-arming Congress into giving $30 billion to Israel over the next decade. This year it is promising to crank-out “thousands” of “business attire” political soldiers to increase funding for Israel, despite a U.S. recession.

At $500 per ticket, conventioneers can participate in AIPAC’s National Policy Conference, March 4-6. Move over AIPAC is preparing to counter the Israel lobbyists’ appointments with Congress, during its gathering outside the Convention Center, March 2-6.

Move over AIPAC has re-branded itself as “Occupy AIPAC,” reflecting the growing connections activists are making between the 1 percent and the Israeli occupation. This connection moved from idea to practice when activists from the Palestine Solidarity Network organized a demonstration against one of AIPAC’s Northern California conferences. Similarly, activists in New York staged a “mic-check,” at a Birthright event, at which Occupy voices challenged the Israel lobby. END_OF_DOCUMENT_TOKEN_TO_BE_REPLACED 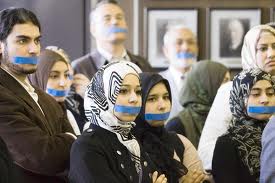 The defense team for the Irvine 11 rested their case on Thursday afternoon at the Orange County Superior Court in Santa Ana, after nearly a dozen pieces of evidence ­ ranging from emails to a video made by The Electronic Intifada ­ were offered to the jury during the last two weeks of trial hearings.

The students from UC Irvine and UC Riverside, who nonviolently protested a speech given by Israeli ambassador Michael Oren in February 2010, are being charged by the Orange County District Attorney’s office with two misdemeanor counts of conspiracy to disrupt a meeting and disruption of a meeting. If convicted, each student could face up to a year in jail for each charge.

Several witnesses concluded their testimonies on Thursday, including a professor of sociology at UCLA who is an expert on audience behavior during speeches, and a former student at UC Irvine who witnessed an on-campus demonstration by college Republicans attempting to shut down a speech by a Muslim activist in 2001. END_OF_DOCUMENT_TOKEN_TO_BE_REPLACED 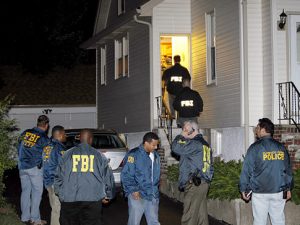 FBI raid in the Midwest

For decades the United States government has attempted to criminalize work in the Palestinian community in support of their national liberation cause. But in recent years this repression has increased dramatically. The Electronic Intifada spoke with the daughter of Sami al-Arian and the daughter of Ghassan Elashi — both political prisoners in the US — about the impact this repression has had on their families’ lives.

And in an Electronic Intifada exclusive, Hatem Abudayyeh, an organizer and community leader whose home in Chicago was raided by federal agents on 24 September 2010, spoke to the press for the first time about his family’s story.

The Electronic Intifada spoke with al-Arian, Elashi and Abudayyeh as activists across the United States prepare for emergency demonstrations as the subpoenas for three anti-war and solidarity organizers to appear before a federal grand jury in Chicago are being reactivated by the Department of Justice.

The three activists are among the 14 who received subpoenas during and soon after coordinated FBI raids on homes and offices across the Midwestern US on 24 September. The government says that the raids and subpoenas are part of an investigation into “material support” of foreign terrorist organizations but it has not arrested or charged anyone. A grand jury, no longer in use anywhere outside the US, is an investigative tool that allows the government to compel citizens to testify even if they are not suspected of any crime. END_OF_DOCUMENT_TOKEN_TO_BE_REPLACED