[In this news report, the San Francisco Chronicle combines boastful techie claims with assertions that this surveillance is motivated by concerns for “public safety,” not to enable political repression and  control. — Frontlines ed.]

The massive undertaking by Oakland officials and police to prepare for protests would be an exceptional challenge for most Bay Area cities. In Oakland, it’s become the new normal.

It involves months of planning, orchestrating hundreds of police and other public workers, and has cost millions of taxpayer dollars.

The Occupy Oakland protesters who took to the streets last week were largely peaceful. But the city had prepared for the worst: They surrounded the protesters with more than a hundred officers on bicycles, motorcycles, all-terrain vehicles, cars, vans and foot. 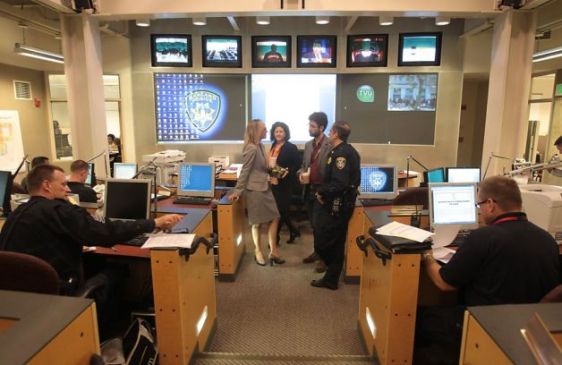 Public safety personnel work in the situation room of the Emergency Operations Center ahead of an Occupy march. Photo: Mathew Sumner, Special To The Chronicle / SF

Meanwhile, inside a downtown building, dozens of city, county, regional and state workers gathered at the city’s Emergency Operations Center to provide support and coordinate the troops on the streets.

Three officers sat at computers monitoring Twitter and other social media for clues on protester plans. Other officers coordinated the taking of internal affairs complaints, and some oversaw the gathering of street intelligence. Five televisions and several other screens showed live streaming video from locations around the city. END_OF_DOCUMENT_TOKEN_TO_BE_REPLACED

Over the weekend Oakland Police seriously injured 24-year-old Tony Jones after they shot him in the back. Jones’ mother says he is a cousin of Oscar Grant — the Hayward man killed by a BART police officer on Jan. 1, 2009.

“I talked to my son. My son said ‘Momma, the officers [are] lying. They watched me get out of the car. They watched me walk. They started speeding up and I took off running across the street and when I took off running and I heard the gun go pow, pow, pow,’” Jones’ mother Betrina Works-Grant told KGO. “He said he was running with his hands like this [at his sides]. The police shot at him and shot him in his back. They never said they [were] the police.” END_OF_DOCUMENT_TOKEN_TO_BE_REPLACED 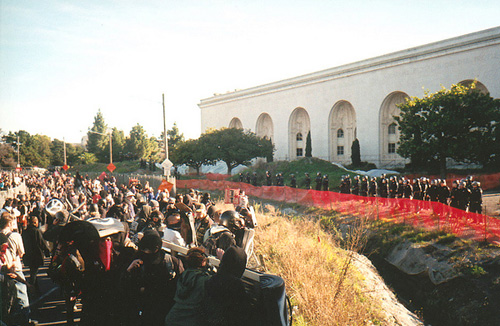 We are writing in regards to any misconceptions you may have regarding last Saturday’s (1/28) Move-In Day to reclaim the unused Henry J. Kaiser Convention Center. We have had to brave a heavy campaign launched by the city and the mainstream media to discredit us, and unfortunately some within our ranks have taken such misrepresentations at face value. We hope that this statement can help clear things up.

We remember how beautiful we all were on our march, a diverse crowd of thousands coming together to turn an unused building into a social center and a new home for Occupy Oakland. We had a children’s brigade at the back and a line of shields in the front, and a celebratory crew of comrades in between. We should be emboldened that there are so many of us out there who are willing to take such action together and like the General Strike and the Port Shutdown, see it as sign of what we can do when united in purpose and solidarity.

Yes, we were met with the heavy hand of the police state when OPD chose to turn our peaceful march into a war zone. But one fact that should not go unnoticed is the courage and resilience we demonstrated on the streets that day. Whether it was advancing behind our shields towards a militarized police force, tearing down fences to escape a police kettle while being tear gassed, escaping through the YMCA to avoid arrest (thank you to whoever it was who let us in!), using a fire extinguisher as a smoke screen to assist the escape of those who were in City Hall, or attempting to free our comrades being transferred to the Glenn E. Dyer Detention Facility, the people of Oakland showed what we are capable of and what we can become. Above all, we demonstrated to the city and its rogue police force that we will not be intimidated or scared by their tactics, when we know that we have each other’s backs. END_OF_DOCUMENT_TOKEN_TO_BE_REPLACED

[Police move in on Occupy Oakland protesters on Oak Street and 12th Street as tear gas gets blown back on them in Oakland, Calif. on Jan. 28, 2012. An unlawful assembly was declared as occupiers planned to take over an undisclosed building. (Bay Area News Group,AP Photo/The Tribune)]

OAKLAND, Calif. – Oakland officials say police are in the process of arresting about 100 Occupy protesters for failing to disperse.

Police Sgt. Christopher Bolton says the arrests come after Occupy Oakland protesters marched through downtown Oakland a little before 8 p.m. Saturday, with some of the protesters entering a YMCA building in the city’s downtown.

The arrests Saturday night come after 19 people were arrested in Occupy Oakland protests during the day.

Police used tear gas and “flash” grenades Saturday to break up hundreds of Occupy protesters after some demonstrators started throwing rocks and flares at officers and tearing down fencing.

Three officers were hurt and 19 people were arrested, the Oakland Police Department said in a release. No details on the officers’ injuries were released.

Police said the group started assembling at a downtown plaza Saturday morning, with demonstrators threatening to take over the vacant Henry Kaiser Convention Center. The group then marched through the streets, disrupting traffic. END_OF_DOCUMENT_TOKEN_TO_BE_REPLACED

As winter sets in, the Occupy Movement nationwide confronts a new series of challenges. Conspiring with the weather, however, is the threat of a shifting policing model currently being tested out in Oakland.

The Italian Communist Antonio Gramsci spoke of a distinction between “war of position” and “war of maneuver,” between those gradual and occasionally imperceptible political struggles that occur every day and the frontal attack on power toward which they eventually build. While this distinction is necessary, it should not be overstated, and nor can we associate the war of position too directly with ideological struggle and war of maneuver with direct military attacks on and by the coercive apparatus of the state. Recent events in Oakland and the strategy of coercive attrition directed against the Occupy Movement make perfectly clear just how insufficient such a correlation would be.

Recent weeks have seen the Occupy Movement confronted with a war of attrition nationwide: as cold weather sets in, many cities have opted to wait out the movement, allowing excitement to fade and the movement to devour itself in the petty squabbles of disempowerment. Often, though, this strategy of passive attrition operates alongside a more aggressive approach. In Philadelphia, for example, a hands-off approach to the now-decamped Occupy Philly operates in tandem with ferocity toward those who step out of line in a transparent attempt to bully radicals into submission (as with the case of two housing activists currently facing multiple felonies).

But it is in Oakland more than anywhere else that friendly weather and sustained militancy have given rise to a different approach, one similarly premised on chipping away at the movement through attrition and fatigue but doing so in a far more repressive manner. One key ingredient to this peculiar constellation of forces is the empty vessel perched atop the city government: Mayor Jean Quan. Quan was discredited long ago and from all sides, hated by the left for unleashing the near fatal attacks on Occupy Oakland in October, and by the right (represented by OPD and the City Council) for not taking a harder line. Now, having opted to vacillate rather than stand on the side of history, she will simply be hoping to serve out her term and avoid an embarrassing recall campaign.

This vacillation has been nowhere clearer than on the question of the epic Port Shutdowns on November 2nd and December 12th, the first of which catapulted Occupy Oakland to the forefront of the national movement, and the second of which demonstrated a capacity for coordinated militancy not seen in this country for decades at least. Since it was Quan who took the heat for the unrestrained actions of police in October, one could hardly blame the Mayor for hesitating to unleash OPD and other forces against those blocking the port. But when Quan suggested that the city might not be able to prevent future shutdowns of the port, her critics in City Council found powerful echo in Governor Jerry Brown. But for now at least, OPD’s hands are at least partially tied, and the full-on assaults of many an officer’s dream go unfulfilled for now.

Blocked from engaging in a brutal war of maneuver, OPD’s strategy has been a different one, and what remains of Occupy Oakland’s presence in Oscar Grant Plaza has seen small raids with a handful of arrests several times a week. While some interpret this half-heartedness by the forces of order as a sign of impotence, the frequency, the timing, and the serious charges incurred in the raids speak to a more sinister strategy. END_OF_DOCUMENT_TOKEN_TO_BE_REPLACED

AlterNet / By Susie Cagle
Oakland has spent more than $1 million on Occupy policing, but nearly all of that overwhelming force has been used against innocent people.
November 6, 2011  |

As I slipped my camera in my pocket and dropped to the ground, I couldn’t help but think: This wasn’t part of the plan.

At least not my plan.

A series of escalations at Occupy Oakland following Wednesday, November 2nd’s General Strike culminated in 101 arrests between 1 and 2 am on Thursday morning — including my own.

Interim Oakland Police Chief Howard Jordan called the arrestees “generally anarchists and provocateurs” in a statement later Thursday. Despite Oakland Mayor Jean Quan’s claims that the city would not be calling for mutual aid–a call for supporting forces from surrounding police agencies to reinforce OPD–in future engagements with Occupy Oakland demonstrators, Jordan called in the order around 4 p.m., following the vandalizing of several large banks, a Whole Foods and a few smaller businesses in the downtown area. END_OF_DOCUMENT_TOKEN_TO_BE_REPLACED

“The camp looks like a tornado went through it. Everything is destroyed, and it is currently occupied by hundreds of police.”

IndyBay spoke with Tim, an organizer with Occupy Oakland, at 7:45am on Tuesday, just a few hours after numerous police agencies raided the encampment, using rubber bullets, tear gas and flash-bang grenades against activists, before arresting dozens of them.This is what he said:

“Around 2am word spread that riot police were massing in around the area where Occupy Oakland has been for more than two weeks. Hundreds of people gathered and began to make non-violent barricades at all the entrances to the plaza.

At about 4:30am, riot police appeared on all corners of the encampment. There were roughly 500 to 700 riot police in total.

The entire plaza was completely barricaded on all sides, with palates, trash cans, chairs, a gigantic christmas wreath, police barricades from a neighboring street.

Occupiers began chanting ‘go home’ as they always do when police show up at Occupy Oakland, but it quickly became clear that there was an overwhelming number of police from at least four different jurisdictions.

As people continued to chant and fell back within the barricade, off of the street, the police announced that we would be arrested within the encampment. They said [they’d use force to disperse demonstrators within] five minutes, and within a minute they fired the first rounds of flash-bang grenades and rubber bullets, and then tear gas into the camp, hitting and injuring multiple people. END_OF_DOCUMENT_TOKEN_TO_BE_REPLACED