[The writer Mannish Sethi relates the court order to the arbitrary and malevolent character of law in India today.  —  Frontlines ed.]

Why the December 23 order of the Nagpur bench of the Bombay High Court — refusing Professor Saibaba bail and issuing a notice of contempt to Arundhati Roy — takes one’s breath away.

Law is no stranger to prejudice or moral anxieties. Judicial pronouncements can sometimes cast aside constitutional values and defer to societal biases masquerading as righteousness. The recurrence of “collective conscience” in terror cases, where the threat of terrorism looms so large that it can overshadow the lack of evidence, is only too well known. Even so, the December 23 order of the Nagpur bench of the Bombay High Court takes one’s breath away. It rejected the regular bail plea moved by the lawyers of Delhi University professor, Saibaba, cancelled his interim bail which allowed him to receive treatment till December 31, and ordered him to surrender within 48 hours. Besides, the court issued a notice of criminal contempt to Arundhati Roy for her article, ‘Professor, POW’, published in Outlook magazine. The order will be remembered for its naked display of contempt for civil rights, partisanship and renunciation of judicial independence.

Wheelchair bound, Saibaba spent over a year in jail before the division bench of the Bombay High Court granted him interim bail on the plea of a social activist in June 2015. (Illustration by C R Sasikumar)

END_OF_DOCUMENT_TOKEN_TO_BE_REPLACED

In 2014, racism is more sophisticated but no less deadly. The grand jury investigating the killing of Michael Brown is taking its time. Brown, 18, was unarmed when he was fatally shot by police officer Darren Wilson in the St Louis suburb of Ferguson, Missouri, in August. Wilson has been suspended on full pay and has not been charged. The four-month period that a panel usually convenes for expired last month. The judge gave the grand jury 60 more days to make a decision, so it has until January 7 to decide whether to indict Wilson. That’s a lot of pop.
END_OF_DOCUMENT_TOKEN_TO_BE_REPLACED

END_OF_DOCUMENT_TOKEN_TO_BE_REPLACED 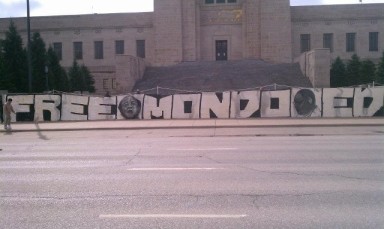 March 15, 2012 | Omaha — Several dozen demonstrators spread a 30 foot banner across the entrance to the Nebraska State Capitol on Tuesday in behalf of the Omaha Two.  Ed Poindexter and Mondo we Langa (formerly David Rice) are serving life sentences at the Nebraska State Penitentiary in Lincoln for the 1970 murder of an Omaha policeman.

FBI Director J Edgar Hoover organized the special COINTELPRO program to eliminate the movements against racism and imperialism. The targets were Black activists and other radical and revolutionary people's movements. The methods were frame-ups and imprisonment, cold-blooded murder, and campaigns of media malignment. Hoover was FBI director from 1924 to 1972.

The Omaha Two were convicted after a COINTELPRO-tainted trial where Federal Bureau of Investigation Director J. Edgar Hoover had ordered evidence withheld from the jury.  Poindexter and Mondo were leaders of Omaha’s Black Panther affiliate chapter and targets of Hoover’s clandestine war of counterintelligence against domestic political activists.

Serving 41 years in prison, the Omaha Two are among America’s longest-held political prisoners.

Ed Poindexter and Mondo we Langa continue to maintain their innocence for the murder of Larry MInard, Sr. on August 17, 1970.  Minard and seven other Omaha police officers were lured to a vacant house by an anonymous 911 call about a woman screaming.  Instead of a woman, police found a booby-trapped suitcase filled with dynamite which exploded in Minard’s face as examined it.-

J. Edgar Hoover ordered the FBI crime laboratory to withhold a report on its analysis of a recording of the 911 call.  Omaha police had sent the tape to Washington to determine the identity of the anonymous caller.  The unknown caller presented a problem in making a case against the two Black Panther leaders. END_OF_DOCUMENT_TOKEN_TO_BE_REPLACED 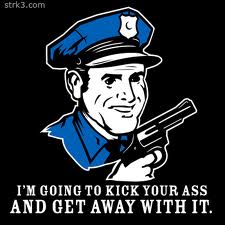 TAMERA MEDLEY begged the police officer to stop slamming her head – over and over – into the hood of a police cruiser.

Thinking they were helping, passers-by Shakir Riley and Melissa Hurling both turned their cellphone video cameras toward the melee that had erupted on Jefferson Street in Wynnefield, they said.

But then the cops turned on them.

Riley had started to walk away when at least five baton-wielding cops followed him, he said, and they beat him, poured a soda on his face and stomped on his phone, destroying the video he had just taken.

Meanwhile, two officers approached Hurling, urged her to leave and, after exchanging a few words, slammed her against a police cruiser, Hurling said. They pulled her by her hair before tossing her into the back of a cop car, she said. END_OF_DOCUMENT_TOKEN_TO_BE_REPLACED

[More evidence of police impunity and the collapse of government accountability and credibility. — Frontlines ed.]

ALBUQUERQUE — Responding to continued pressure from civil-rights
advocates and the families of some of the 13 people killed by
Albuquerque police in recent months, the city council has narrowly
agreed to seek a federal probe of police shootings.

After several attempts to put off the issue, the council just before
midnight Monday, Aug. 1, passed 5-4 a resolution that directs the city
to ask the U.S. Department of Justice to investigate whether there is
a pattern of civil-rights violations in the department.

Mayor Richard Berry’s office declined to say whether he would sign or
veto the measure. END_OF_DOCUMENT_TOKEN_TO_BE_REPLACED