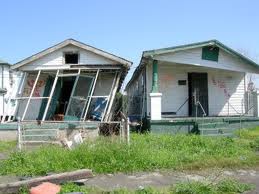 It will be five years since Katrina on August 29. The impact of Katrina is quite painful for regular people in the area. This article looks at what has happened since Katrina not from the perspective of the higher ups looking down from their offices but from the street level view of the people – a view which looks at the impact on the elderly, the renter, people of color, the disabled, the working and non-working poor. So, while one commentator may happily say that the median income in New Orleans has risen since Katrina, a street level perspective recognizes that is because large numbers of the poorest people have not been able to return.

Five years after Katrina, tens of thousands of homes in New Orleans remain vacant or blighted. Tens of thousands of African American children who were in the public schools have not made it back, nor have their parents. New Orleans has lost at least 100,000 people. Thousands of elderly and disabled people have not made it back. Affordable housing is not readily available so tens of thousands pay rents that are out of proportion to their wages. Race and gender remain excellent indicators of who is underpaid, who is a renter, who is in public school and who is low income.

In short, the challenges facing New Orleans after Katrina are the same ones facing millions of people of color, women, the elderly and disabled and their children across the US. Katrina just made these challenges clearer in New Orleans than in many other places. Here is where we are five years later. END_OF_DOCUMENT_TOKEN_TO_BE_REPLACED