Kathmandu: Indicating a deepening rift in Nepal’s ruling Maoist party, hardline leader Mohan Vaidya “Kiran” on Sunday opposed the move to disarm the former gurrillas and plans to return property seized during the decade-long civil war in the country.

“The rift in the party was between the revolutionaries and opportunists,” he underlined, adding that he was not ready to compromise on principles and ideology of the party.

Underlining the need for ‘people’s revolution’ in Nepal, Vaidya said the Maoists’ revolution would be complete only by establishing “Janabad” or peoples rule.

He said the UCPN-Maoist aims “to empower people with political, economic and cultural rights and safeguard national sovereignty.” END_OF_DOCUMENT_TOKEN_TO_BE_REPLACED

[Bourgeois calls for revolutionaries to surrender often seize hold of the most tarnished and discredited tools–in this case, Abimael Guzman aka “Gonzalo” who was a founder and leader of the Communist Party of Peru until he was captured and renounced the people’s war for power and for revolutionary transformation of Peru.  While some in Nepal have already taken the path of surrender, Nepali revolutionary Maoists are having nothing of it, as the struggle for revolution against revisionism continues within the UNCN(M) and, importantly, in the streets and villages. — Frontlines ed.] 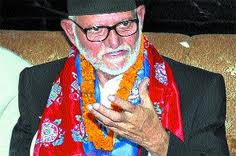 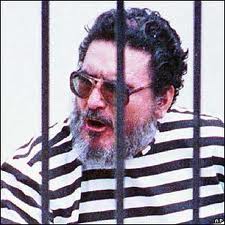 After Peruvian Maoist leader Gonzalo was captured, in time he sang a different tune of surrender, and denounced the Peoples War--winning him praise from reactionaries.

Speaking at a function in Pokhara, President Koirala urged the Maoists not to go against the democratic system and derail the peace process. He urged the Maoists to adopt the path of peace and constitution to bring about prosperity in the country.

“Even Peruvian revolutionary leader Gonzalo, who orchestrated the killing of about 70,000 people the guerilla war popularly known as ´Shining Path´, has asked the Maoists to adopt the path of peace. Maoists should follow the path of peace,” he said.

Gonzalo, who is currently serving a jail term, had reportedly sent a letter to the UCPN (Maoist) through his aides.

“The leader who led once of the greatest armed rebellion also acknowledged the importance of peaceful means. The Maoists should also acknowledge the fact,” he further said.

Koirala also warned that the Maoists would perish if they try to impose dictatorship in the country. END_OF_DOCUMENT_TOKEN_TO_BE_REPLACED 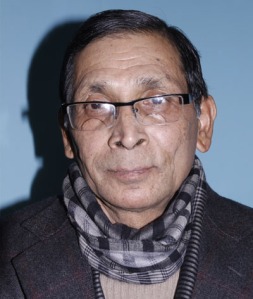 Q. Your experience with the formulation of national constitution in the last two years and the resistance by the reactionary parliamentary right wingers like Nepali congress. How do you sum it up in retrospect?

A. Our experience of Constituent Assembly for the last two years and our co-work with parliamentarian parties, including Nepali Congress, has been very complicated and bitter. In this whole process, intense ideological struggle is going on between two mutually contradictory trends: whether to build a new national army by integrating PLA in a dignified manner or make them surrender by disarming them and whether to attempt writing people’s constitution with anti-feudal and anti-imperialist content or write a parliamentarian constitution based on status quo. In this struggle our party is becoming weaker day by day.

In this course, a serious two-line struggle is taking place on the evaluation of different compromises and agreements reached from the past to now.

Q. Indian Maoists, your counterpart from India, were skeptical over your participation in the parliamentary path without the overthrow of the then existent state structures. Your party chose to restructure the state apparatus by participating in the bourgeoisie state legislature. How do you see it in retrospect? 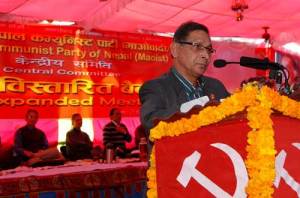 A. Our party had initiated and conducted the great people’s war to establish new democratic state power by destroying the old one. However, without accomplishing this task we took a course of compromise and adopted a policy of restructuring the state. We take it as our limitation and obligation. It is natural for the Indian Maoists to be skeptical of our party. Our party’s practice in the days to come will provide correct answer to the doubt that the Indian comrades have expressed or will justify its irrelevance or relevance.

Q. Your nation is sandwiched between two giant powers of the south Asia, i.e. India and china. Your party saw India as more harmful than China against your revolutionary tide. Later, Prachanda, your party chairman was becoming more friendly to India shirking anti Indian stance. How do you explain this duality?

A. Yes, our country is sandwiched between two giant powerful countries of the south Asia, like India and china. We want to maintain a good neighbourly relation and go ahead by honouring each other’s national integrity and reverence with both of these countries. There are various unequal treaties, including the treaty of 1950, between Nepal and India. But, there are no such unequal treaties with China. In this sense, we oppose the expansionist attitude of the Indian ruling classes. However, we are not opposed to Indian people. We want to abrogate unequal treaties and sign up the new ones that are based on common interest and mutual equality of both the countries. END_OF_DOCUMENT_TOKEN_TO_BE_REPLACED

[Update: “We have just learned that the Prachanda and Bhattarai factions have announced that the will not step down from the moves to disarm the PLA. Not only will they hand over the keys, but they will also begin moving the countainers out of three of the cantonments. Kiran, Dev Gurung, and Biplab boycotted the meeting.”]

By Eric Ribellarsi, Winter has Its End

Today, the Kiran faction of the Unified Communist Party of Nepal (Maoist) has launched a major protest program against the disarming of the People’s Liberation Army being led by Nepal’s new Prime Minister, Baburam Bhattarai. The Maoist rebels are demanding the immediate reversal of the decision to disarm People’s Liberation Army, a process which has already begun.

So far, this programme has included:

1. A nation-wide one hour blockade of major roads and intersection throughout the country. We have heard this took place at roughly 50 locations in Kathmandu, including Kalanki, the main road used for entrance into Kathmandu.

3. Torchlight marches throughout Kathmandu and in other cities throughout the entire country, beginning tonight at 6:00 PM.

We will keep you posted as we learn more.

A leader of the revolutionary Maoists in Nepal, Comrade Baidhya

(The Next Front:  “The design and mission of Prachanda and Baburam, who had long been planning to disarm, dissolve and liquidate the People’s Army under various pretexts, have finally come to fruition. They have handed over the keys of the containers, in which weapons of the People’s Liberation Army have been locked, to the Army Integration Special Committee without the consent of party’s vice chairman Mohan Baidhya’Kiran’ and even without consultation with general secretary Ram Bahadur Thapa ‘Badal’ who is the in-charge of the party’s army department. The keys of the containers have been handed over to the government against the spirit of the party’s official decision. This decision is a kind of design to liquidate the PLA. We, therefore, condemn this kind of capitulationism. Following is the statement issued on behalf of revolutionaries on this issue.”)

Our party has been committed to carrying the tasks of constitution writing and army integration to a meaningful conclusion in accordance with the spirit of the Comprehensive Peace Agreement (CPA). We have made it clear that both of these responsibilities have to be accomplished simultaneously. There can be no divided opinion about the fact that army integration is an important part of the peace process.  It is known to all that we have been advancing the issue of army integration with consensus.

It is also clear that the meetings of our party held at different levels and on different occasions have taken the decision to integrate the army in a dignified manner. Despite the formal decision of the party to agree on the regrouping of the PLA members only after settling the issues concerning the modality of integration and rehabilitation package, the sudden and surprise decision to hand over the keys of the containers and weapons is against the decision of the party’s standing committee and central committee. This decision is a ploy to dissolve and liquidate the People’s Liberation Army by disarming it.  We strongly condemn this type of decision and also appeal to all concerned people and sectors to immediately terminate this suicidal decision.

In what would be viewed as a major headway in ongoing peace process, ruling UCPN (Maoist) Thursday started handing over keys of the weapons containers to Army Integration Special Committee (AISC) as per the party’s earlier decision.

Despite facing sharp opposition from the hardliner faction led by party vice chairman Mohan Baidya, the Maoist party started handover of the keys of arms containers to the AISC from the Third Division of PLA cantonment in Shaktikhor of Chitwan and Second Division in Dudhauli of Sindhuli district.

Likewise, the Maoists have also handed over keys of the arms container at the Second Division in Dudhauli of Sindhuli district. According to the source, the keys were handed over as per the command of the PLA headquarter Thursday afternoon. END_OF_DOCUMENT_TOKEN_TO_BE_REPLACED

KATHMANDU, AUG 31 -In a major breakthrough in the peace process, the UCPN (Maoist) on Wednesday agreed to hand over keys to arms containers to the Special Committee on Thursday.

The decision to acquire the arms containers installed at cantonment sites was formalised by the Special Committee led by newly-elected Prime Minister Baburam Bhattarai. The Maoist party’s consent to detach itself from its weapons comes four days after the Maoist vice-chairman was elected the PM. END_OF_DOCUMENT_TOKEN_TO_BE_REPLACED