Israeli troops opened fire on scores of Palestinian protesters from Syria who tried to cross the frontier at the Israeli-held Golan Heights.

MAJDAL SHAMS, Golan Heights — Israeli troops opened fire as hundreds of Palestinian protesters and supporters from Syria tried to cross the frontier with the Israeli-held Golan Heights on Sunday. The official Syrian news agency said 22 people were killed and more than 350 injured.The protest near the Golan and other demonstrations in the West Bank and Gaza Strip marked the anniversary of the outbreak of the 1967 Middle East war, in which Israel captured those territories.
Israeli army spokesman Brig. Gen. Yoav Mordechai accused Syria of creating “a provocation” at the border to distract attention from the Syrian government’s deadly crackdown on the uprising in that country.In a sign of official backing for the protests, the border clashes were broadcast live on Syrian television, with comments from participants, and reporters were permitted direct access to the normally closed frontier zones.Near the Druze village of Majdal Shams in the Golan Heights, hundreds of protesters, many of whom arrived from Damascus, streamed down a hillside and marched toward the frontier, carrying Palestinian and Syrian flags and chanting “Palestine is Arab!” and “the Golan is Syrian!”

Unlike a similar effort last month, in which marchers from Syria caught the Israeli army unprepared and breached the frontier, soldiers Sunday were waiting for the demonstrators and used gunfire to hold them back. END_OF_DOCUMENT_TOKEN_TO_BE_REPLACED

Hundreds of police fanned out across the Golan Heights on Monday in search of refugees who crossed over from Syria in
some of the bloodiest violence in years along Israel’s borders.

In Lebanon, Syria and the Palestinian territories, people gathered to mourn the 14 people killed when Israeli troops
opened fire on thousands of protesters who sought to breach its northern borders.

Hundreds were injured in the occupied Golan Heights, as well as in clashes with Israeli troops in the West Bank and
northern Gaza Strip as Palestinians marked the anniversary of Israel’s founding in 1948, in an event known in Arabic as the
“nakba” or “catastrophe.” END_OF_DOCUMENT_TOKEN_TO_BE_REPLACED

[As this article points out, “The… treaty which (Jordan and Israel) concluded in 1994 commits Jordan to prevent using its territory to stage activity against Israeli targets.” — Frontlines ed.]

Amman – Jordanian security authorities on Saturday turned back buses carrying scores of activists hoping to get to the Israel-controlled border with the West Bank to mark the 63th anniversary of the founding of Israel, or Nakba (catastrophe), as the Palestinians call it.

Protestors attempting to reach Gaza from Egypt were similarly stopped in Sinai by Egyptian police Saturday.

The group, calling itself the ‘May 15 Youth’, was intercepted by police about five kilometres from the King Hussein crossing point on River Jordan, where activists had planned to spend the night. END_OF_DOCUMENT_TOKEN_TO_BE_REPLACED

[We reprint below an interesting call to the millions in the Palestinian diaspora to re-focus the collective imagination on the day of … liberation? independence? revolution? (however the day is envisioned) and share those thoughts with the community.  The call appeared on the KABOBfest website. — Frontlines ed.]

Check out this new initiative from the US Palestinian Community Network. If you want to be a part of the project’s debut, be sure to get your submission in asap!

WHEN I RETURN – A collective celebration of hope and promise

When I Return, an initiative by young members of the US Palestinian Community Network (www.uspcn.org), invites you to participate in highlighting the collective aspirations for the freedom and liberation of Palestine. END_OF_DOCUMENT_TOKEN_TO_BE_REPLACED 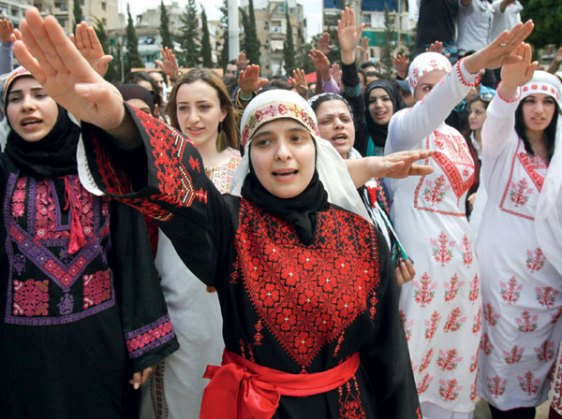 Palestinian women wearing traditional dresses salute as they sing the national anthem during a festival to commemorate Nakba in Beirut yesterday. Palestinians will mark “Nakba” on May 15 to commemorate the expulsion or fleeing of some 700, 000 Palestinians from their homes in the war that led to the founding of Israel in 1948.

[In the  following article, the Palestine News Network reports the Israeli threat to attack this weekend Nakba commemoration in these terms:  “According to the Israeli army site several regiments will be joining units already in place, in case Palestinian rallies needed to be suppressed“! (our emphasis)— Frontlines ed.]
Thursday May 12, 2011
by Palestine News Network & Agencies

Israeli media sources reported on Wednesday that the Israeli Army are set to increase West Bank deployment as Palestinians prepare to commemorate the Nakba, or in English ‘catastrophe’ from the period of 1948 which saw the establishment of the state of Israel after an estimated 700,000 Palestinians were expelled from their homes.

The annual ‘Nakba Day’ will be marked on May 15. Israeli Security chiefs have been closely monitoring the situation in advance, and as of Wednesday the Israeli troop deployment throughout many areas in the West Bank and close to the Gaza strip will increase significantly, the army announced. Despite considerations that the Palestinian security forces will be aiming to keep tensions low, the Israeli army is preparing for various scenarios, including cases of extreme violence envisaged, sources reported on Wednesday.

According to the Israeli army site several regiments will be joining units already in place, in case Palestinian rallies needed to be suppressed or clashes take place Israeli forces and settlers. END_OF_DOCUMENT_TOKEN_TO_BE_REPLACED