by Erin Lahman in Politics, PolicyMic

On June 3, the highly anticipated court-martial of Army Pfc. Bradley Manning, who was arrested in July 2010, will take place. A previous PolicyMic article delivered specific details on the over 700,000 government documents and pieces of classified military information Manning allegedly leaked. According to the article, “Manning is charged with leaking hundreds-of-thousands of classified documents to the website WikiLeaks.”

Manning is an American hero who made the decision to leak these classified documents as a service to the general public. He testified, “I believe that if the general public had access to the information, this could spark a domestic debate as to the role of the military and foreign policy in general.” He added, “I felt I accomplished something that would allow me to have a clear conscience.”

In a January 2013 ruling, Military Judge Colonel Denise Lind awarded Manning a 112-day reduction in any eventual sentence due to being subjected to excessively harsh treatment while in military detention. A month later, Judge Lind accepted Bradley Manning’s guilty pleas of 10 lesser charges that he misused classified information, though he denied “aiding the enemy.” A guilty sentence to “aiding the enemy” could languish him military prison for the remainder of his life.

Bradley Manning released the video, “Collateral Murder,” to WikiLeaks and he explained, “The most alarming aspect of the video to me was the seemingly delightful bloodlust they appeared to have.” He went on, “They dehumanized the individuals they were engaging and seemed to not value human life by referring to them as quote ‘dead bastards’ unquote and congratulating each other on the ability to kill in large numbers.” END_OF_DOCUMENT_TOKEN_TO_BE_REPLACED 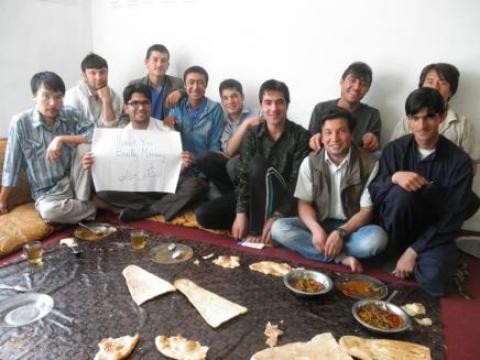 A few evenings ago, as the sky began to darken here in Kabul, Afghanistan, a small group of the Afghan Peace Volunteers, (APVs),gathered for an informal presentation about WikiLeaks, its chief editor Julian Assange, and its most prominent contributor, Bradley Manning. Basir Bita, a regular visitor to the APV household, began the evening’s discussion noting that June 1st will mark the beginning of Bradley Manning’s fourth year in prison.  Two days later his trial will begin, a trial which could sadly result in his imprisonment for a life sentence. June 1st also begins an international week of support and solidarity, aimed at thanking Bradley Manning [1].

Basir believes that the vast majority of Afghans are among myriads world-wide who have Manning to thank for information they will need in struggles for freedom, security, and peace. He wishes that more people would find the courage to stand up to military and government forces, especially their own, and act as “whistle-blowers.”

I often hear Afghan individuals and groups express longing for a far more democratic process than is allowed them in a country dominated by warlords, the U.S./NATO militaries, and their commanders.  In the U.S., a lack of crucial information increasingly threatens democratic processes. How can people make informed choices if their leaders deliberately withhold crucial information from them?  Manning’s disclosures have brought desperately needed light to the U.S. and to countries around the world, including struggling countries like Afghanistan.

Hakim, who mentors the Afghan Peace Volunteers, recalled that Bradley Manning passed on documents that record 91,730 “Significant Actions,” or “SIGACTS” undertaken here by the U.S. /ISAF forces, of which 75,000 were released by WikiLeaks.

These SIGACTS include attacks by drones, sometimes invisible drones, and night raids. END_OF_DOCUMENT_TOKEN_TO_BE_REPLACED