The situation in Greece 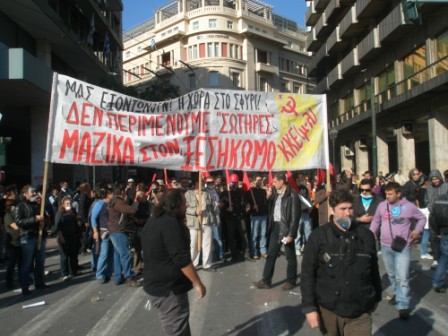 The situation in Greece is critical both for the people and the working class. Because of the imperialist dependence of the country, its position in the EU and the Eurozone, its military-political dependence in NATO and its military-political role as a NATO-US springboard, the social and political developments in Greece cannot be seen apart from the developments in SE Mediterranean, the M. East., N. Africa, the Balkans and the quarrels inside the EU.

All contradictions and geo-political aims of the imperialist powers in the region, along with the special but critical issue of the future of the EU, are influencing all developments in our country, having in their background the world crisis. That is the reason that Greece is in the first page of the Media something that is proportionately greater than that of other countries similar to Greece (Portugal, Ireland).

The troika mechanism and its real targets

Starting after the October 2009 elections and the troika (IMF-EU-ECB) “salvation mechanism” of May 2010 there is in motion a rapidly escalating antipopular and antilabor policy that flattens all economic-labor-social rights of the people. The imperialist powers of the EU, mainly Germany and France, aided by the strong presence of the US through the IMF, and with the pretext of the great foreign debt imposed a deeper subjugation that takes the form of a protectorate.

This mechanism gives shark loans in 3-month installments in order to pay back a portion of the huge interests. This leads to greater debt. (In 2009 the debt was 120% of GDP and now approaches 160%). But the greatest imperialist profit is not the huge amounts of money that accumulate through this loan shark imposition. The main return that they take from the country is its total destruction of any productive base, the imposition of a medieval regime as far as the labor, social, economic and political rights of the people are concerned, and the sell-out and plunder of every resource and infrastructure this country has. END_OF_DOCUMENT_TOKEN_TO_BE_REPLACED