By Emily Tarbuck | The Argentina Independent | June 6, 2013The Brazilian government has announced that it will send around 200 soldiers to land occupied by indigenous groups in Mato Grosso do Sul.The move comes after a member of the Terena indigenous group was killed whilst police attempted to evict the occupiers last week. The groups believe the land belongs to their indigenous ancestral territory, which is currently recognised as the property of local politician, Ricardo Bacha, and have occupied the land for over two weeks. END_OF_DOCUMENT_TOKEN_TO_BE_REPLACED 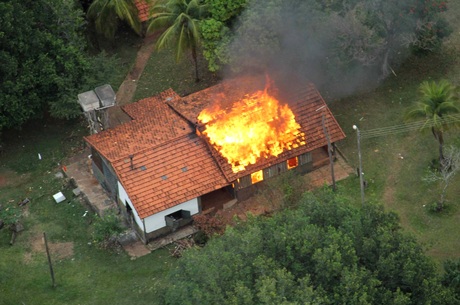 In last Thursday (30), an Indian was killed in Mato Grosso do Sul, during a repossession of a farm in Sidrolândia municipality which is about 60 kilometers from the capital Campo Grande.
Osiel abriel was shot dead, and according to Minister José Eduardo Cardozo, the Federal Police have opened investigation into the crime. The farm was occupied from the 15th of this month. It is in an area where there is conflict over land for more than a decade.

Indigenous groups have re-occupied farm land in Mato Grosso do Sul, South of Brazil, after being evicted on Thursday.

The groups are claiming ownership over part of the farm as they say it forms part of their ancestral lands.

The groups have occupied the land, which is owned by a local politician, Ricardo Bacha, for over two weeks. During the eviction process on Thursday, one of the group members, Osiel Abriel was shot and killed by police.

According to press reports, police officers have claimed that the group became violent during Thursday’s eviction process.

Brazil’s justice minister José Eduardo Cardozo, has called an investigation into the death of Abriel which will determine if an excessive and unnecessary use of force and firearms were used.

“We will very accurately determine what happened. If there were abuses, those responsible will be punished, “he said.

On Friday, 250 people from the group returned back to the farm to re-occupy the land.

Local media have said that although the situation continues to be “tense”, there has been no violence since the re-occupation on Friday. END_OF_DOCUMENT_TOKEN_TO_BE_REPLACED