Kathmandu, 27 March: A meeting of the Maoist central committee that was postponed for one day Monday citing inadequate preparation has now been indefinitely postponed amid serious internal party differences.

Maoist establishment of Chairman Prachanda and Prime Minister Baburai Bhattarai had convened the central committee meeting Monday to discuss differences jointly but the meet was boycotted by dissidents led by First Vice-chairman Mohan Baidhaya who has mobilized a national campaign against the UCPN (Maoist) establishment and the government led by Second Vice-chairman Baburam Bhattarai.

Secretary CP Gajurel, who has sided with the Baidhaya camp, said Monday the government is undergoing treatment at the ICU. and is on its
death bed. 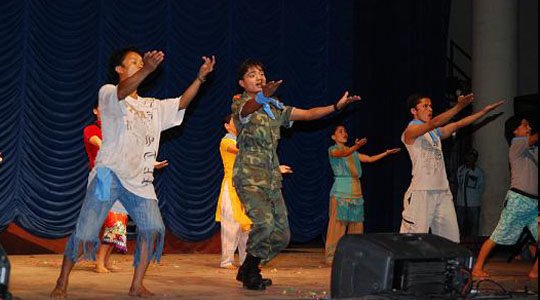 KATHMANDU, Aug 13: The recent efforts within the UCPN (Maoist) to end the continuing intra-party feud seems to have fallen apart, with a split in the party´s top cultural group – Samana Pariwar — on Friday.

The faction of the cultural group close to Baidya was in Birtanagar for its cultural campaign “Saman Jansangeet Abhiyan” when the Dahal-faction announced a parallel group in Kathmandu. END_OF_DOCUMENT_TOKEN_TO_BE_REPLACED

KATHMANDU, MAY 24 –
Amid intense negotiations between Nepali Congress and the Maoists, the internal party manoeuvrings of the Maoist hardliners is likely to affect their party’s position at the negotiating table. The UCPN (Maoist) faction led by Vice Chairman Mohan Baidya has begun a signature drive to put pressure on Chairman Pushpa Kamal Dahal to stop him from conceding further ground to other parties on integration and other contentious issues in the new constitution.

Leaders close to Baidya say that they are prepared to cross the floor if the CA extension comes at ‘too high a cost’. “If Dahal offers to agree to NC’s conditions on integration to extend the CA, we will cross the floor and ultimately quit the party,” threatened a leader close to Baidya. Even leaders close to Dahal and Vice Chairman Baburam Bhattarai camps admit that Baidya has the support of over 85 lawmakers and a strong position within the PLA. The hardliners accuse Dahal of “selling out” and have objected to the approach on peace and constitution taken by Dahal. While Bhattarai and Dahal are busy negotiating with other parties, the hardliners are holding meetings of their cadres and rallying them against Dahal’s position. “For now, the signature campaign is aimed at demonstrating our strength in the CA and PLA,  but if he continuously ignores our concerns we will be compelled to take extreme steps, including leaving the party,” said a leader in the Baidya camp.

The hardline faction also wants see the continuity of the Khanal government, while Dahal has said he is open to an alternative if there is a broad agreement on power-sharing and other issues. The hardliners’ grouse against the party establishment is not new. During the party plenum last November, Baidya had threatened to quit the party if Dahal failed to mend his working style. The Baidya faction had registered a note of dissent when the party’s Central Committee passed the line of peace and constitution and when the Standing Committee agreed on the NA proposal on integration.

KATHMANDU, Jan 30: In a clear manifestation of boiling intra-party turmoil, the rival factions of the UCPN (Maoist) have intensified their media war against each other – attacking the rivals’ characters and ideological positions.

The deepening animosity between Chairman Pushpa Kamal Dahal and Vice-chairman Dr Baburam Bhattarai is reflected in the latest issues of Lal Rakshak and Samaya Bodh — two magazines launched by those close to Dahal and Bhattarai factions respectively.

Lal Rakshak accuses Bhattarai of fearing the “hurricane of people’s revolt” and running away from it, while Samaya Bodh paints Dahal as a leader obsessed with power and bereft of political vision. END_OF_DOCUMENT_TOKEN_TO_BE_REPLACED