Graffiti has been a tool of the Palestinian liberation struggle for decades; during the first intifada in the late 1980s and early ’90s, Palestinians painted graffiti on all the walls as a means of protesting the occupation. Graffiti artists were met with brutal suppression if caught.

Young Palestinians are carrying on the legacy of art as a form of resistance today. On 12 January, an unknown group penetrated the heavily-fortified heart of West Jerusalem overnight and painted graffiti bearing political messages on walls, doors, construction sites and other surfaces. Most of the paintings pictured a woman’s face masked with a kuffiyeh, the traditional Palestinian checkered scarf. Below some of the images was the word “revolt” in Arabic.

The group hit the walls of Jerusalem again five days later, and issued an anonymous statement vowing to carry on their action to send messages to the Israeli and Palestinian communities.

In the following weeks, other groups took up the spray can torch in various cities including Haifa and Jaffa.

And in June, the Jerusalem activists took a daring step by painting graffiti on the doors and walls of governmental buildings as well as the doorways of Israeli houses in Jerusalem and Palestinian houses occupied since the ethnic cleansing of 1948. They sent the same messages calling upon Palestinians in general, and Palestinian women in particular, to revolt. They also painted “Remember Gaza” across the wall of one of the buildings in big letters.

A member of the group, a confident young Palestinian feminist activist who operates under the pseudonym “Laila,” spoke to The Electronic Intifada on condition of anonymity. Laila has been active in street art in Palestine before the creation of the anonymous Jerusalem group, focusing on painting both the walls of West and East Jerusalem.

“Some of the street art I have done was in what has now become West Jerusalem in Jewish-dominated areas,” said Laila. “Some other stuff I have done is in East Jerusalem where messages have been more about feminist messages to [Palestinian] women, mostly to wake up and not be drowned out by the patriarchal nature of our society.” END_OF_DOCUMENT_TOKEN_TO_BE_REPLACED 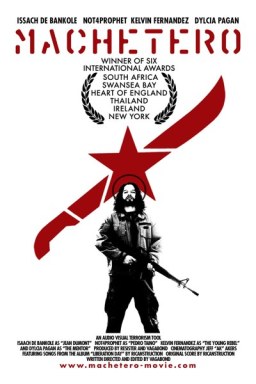 [For the new generation of activists, the inspiration, experiences and lessons of the Puerto Rican liberation struggle  and other empire-shaking movements of the 20th Century are the raw material from which strategies of new revolutionary movements will be forged.  This new film begins to ask a critical question for revolutionaries:  Is there a difference between violence and revolutionary violence, and if so, what is it?  There is a distance between that question and the answer, which may only be answered in the struggle of new generations. This film will kindle that discussion and ferment.–Frontlines ed.]

Machetero studies aspects of the Puerto Rican independence movement, with attention to the more radical-minded fighters for freedom. It offers meditation and debate on violence as a means to achieve results in the struggle for dignity. Machetero is artist, writer, producer, and director Vagabond Beaumont’s first feature film. This controversial film has “engendered political discussion and debate within (and outside of) the Puerto Rican Diaspora and has been called one of the most important and insightful underground political films ever made.” In 2008 it was a finalist for Best Film at the Hollywood Black Film Festival and, in the same year, it won the prize for Best First Film at the International Film Festival South Africa. The film has won six awards around the world.

In the tradition of Gillo Pontecorvo’s Battle Of Algiers, Melvin Van Peebles Sweet Sweetback’s Badasssss Song and Sam Greenlee’s The Spook Who Sat By The Door, Vagabond’s MACHETERO is a meditation on violence as a means toward liberation. Post 9/11 definitions, ideas and notions of terrorism are challenged in this highly controversial and experimental film. Machetero is an allegorical narrative that follows French journalist Jean Dumont, played by Isaach de Bankolé (The Keeper, Ghost Dog, Manderlay, Casino Royale, The Limits Of Control), to a New York prison where he interviews Pedro Taino, a so-called “Puerto Rican Terrorist” played by Not4Prophet (lead singer of the Puerto Punk band RICANSTRUCTION).

Pedro is a self-described Machetero fighting to free Puerto Rico from the yoke of United States colonialism. He is obsessed with freedom, freedom for his country, his people and for himself. Jean questions Pedro about his decision to use violence as a means to achieve that freedom. Jean utilizes a global perspective in questioning Pedro, referencing examples of achieving his goals through more peaceful means.  However Jean soon finds that Pedro is well versed in liberation struggles from around the world and their debate over the use of violence as a catalyst for change escalates.