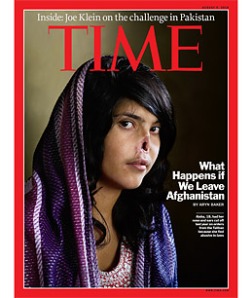 [With “liberators” like these, who needs oppressors?  This article breaks down the deceitful justifications of the US war in Afghanistan.-ed.]

TIME magazine must be experiencing a severe case of amnesia, judging by the cover of this week’s issue which asks, “What Happens If We Leave Afghanistan .” At best, this effort by TIME is irresponsible slick journalism; at worst, it is one of the most blatant pieces of pro-war propaganda seen in years. The world owes Afghanistan’s women an honest answer as to why we apathetically allow their condition to deteriorate from horrible to simply unspeakable. Instead, TIME is willingly deceiving readers into thinking that the condition of Aisha – the woman pictured on the cover – is a product of the Taliban 10 years ago. It is not. Aisha’s scarred face is a heart-wrenching reflection of the state of Afghan women today in the year 2010, and under the absurd assertion of democracy and the presence of thousands of US and NATO troops in the country.

Aisha was attacked by the Taliban last year, the same time that thousands of foreign troops were running around the country under the guise of liberating it. TIME is repeating the inexcusable and now redundant mantra used by the Department of Defense and by just about every neocon politician: We’re in Afghanistan to save the women. Here’s the problem: as US troops remain in the country and have dominated it for the past 10 years, violence against women in Afghanistan has been increasing – not decreasing. The actions of the Taliban have been reprehensible and the farthest thing from Islamic doctrine; however, TIME magazine and Katie Couric (who gave a humiliating endorsement of the cover and succeeding article) seem intent on fueling the fire of Islamophobia using such images. END_OF_DOCUMENT_TOKEN_TO_BE_REPLACED