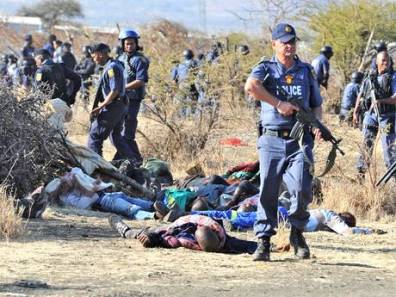 State prosecutors have charged 270 strikers arrested at Marikana platinum mine with the murder of 34 colleagues. The arrests went ahead despite confirmation that the victims were shot dead by police, in the latest setback to prospects of peace in the South African mining industry.

The strike at Marikana that called for 3,000 rock drillers to have their monthly pay increased to 12,500 rand (£940) has led to a total of 44 deaths, including those of two policemen and two security guards. In shocking scenes on 16 August, police opened fire on a group of miners, killing 34 and injuring 78.

Lawyers acting for the detained men yesterday appeared for a third day at Ga-Rankuwa magistrate’s court to argue for them to be released on bail, after it emerged that state prosecutor Nigel Carpenter had increased the charges against the men from attempted murder and public violence to murder. Meanwhile, government mediators yesterday met representatives from the mine owner, Lonmin, and four trade unions in an attempt to sign a peace accord as a precursor to wage talks. The Marikana mine was at a standstill with only 7.7 per cent of employees reporting for work – the lowest figure since the strike began on 10 August. END_OF_DOCUMENT_TOKEN_TO_BE_REPLACED