[The Revolutionary Maoists led by Vice Chairman Mohan Baidya are leading the fight against the “establishment ‘Maoists'” (Bhattarai and Dahal/’Prachanda’) who have reneged on their revolutionary oath to landless peasants and Dalits and agreed to return the lands which had been seized from vicious, abusive, and absent landlords during the People’s War and were redistributed to peasant farmers. — Frontlines ed.]

KATHMANDU, NOV 07 – The Maoist hardline faction led by Vice-chairman Mohan Baidya and party establishment camp are at odds over returning property seized or occupied by the party.

Return of property seized or occupied by the Maoists was one of the key points agreed to in the seven-point deal signed on November 1. The Baidya faction has, however, said it will resist every effort that is made to take away the land from the poor farmers and the landless.

A day after UCPN (Maoist) Chairman Pushpa Kamal Dahal issued a circular to the party’s lower organisations directing cadres to assist in the process of returning seized property, a gathering of the Baidya camp in the Capital on Sunday directed its activists to thwart the ‘takeover’.

“We will retaliate if anyone tries to take over the land from the farmers,” said Maheshwor Dahal, the Maoist central committee member of the Baidya faction. END_OF_DOCUMENT_TOKEN_TO_BE_REPLACED

[Throughout the world–in semi-colonial and dependent countries–the struggle of peasants for land is an essential part of the revolutionary struggle for state power and new democracy. While comprador politicians often disguise themselves with the populist language of land reform, experience has shown that such phrase-mongering deceives few for very long. Real land reform is won through the revolutionary seizure of power.  This article from IBON exposes the empty promises of land reform by recent and present comprador Philippine governments.-ed.]

Peasants at work at Hacienda Luisita

The bitter plight of Filipino farmers continues past the Aquino administration’s first 100 days and into October which the peasant movement marks as Peasant Month.

The First 100 Days Report of Pres. Benigno ‘Noynoy’ Aquino’s administration made no mention of its program for land reform. This was also true in Pres. Aquino’s first State of the Nation Address (SONA) in July, which only mentioned public-private partnerships for farming facilities and infrastructure.

All these betray that working for real land reform is not in the list of priorities of Pres. Aquino, a known haciendero. In the past, he had declared support for the one-year-old Comprehensive Agrarian Reform Program Extended with Reforms (CARPer), which peasant groups have denounced as a futile law that is biased against peasants. In fact, a year after the enactment of RA 9700 or the CARPer, past the new administration’s first 100 days and into October which the Philippine peasant movement marks as Peasant Month, the bitter plight of Filipino farmers continues. END_OF_DOCUMENT_TOKEN_TO_BE_REPLACED

Gonzalez, survivor of the ambush staged by elements of death squad allegedly from the Southern Luzon Command (Solcom) of the Armed Forces of the Philippines (AFP) during the May 2004 elections, along with farmer and fisherfolk leaders aging from 50 to 60 years old and all members of the Katipunan ng mga Samahang Magbubukid sa Timog Katagalugan (Kasama-TK) and Pambansang Lakas ng Kilusang Mamamalakaya ng Pilipinas-Timog Katagalugan (Pamalakaya-TK) trooped to the heavily guarded gate of Malacanang to warn Aquino of “intensified peasant war” over the President’s failure to address the land problem in Southern Tagalog.

“If Aquino wants war, we will give him war. There’s no turning back. They can’t stop me and the rural people from fighting for land and justice. His first 100 days in office is checkered with agrarian injustice, scores of human rights violations, triple platinum corruption and extreme disregard of people’s rights and welfare. This regime of Aquino is doomed,” added Gonzalez. END_OF_DOCUMENT_TOKEN_TO_BE_REPLACED 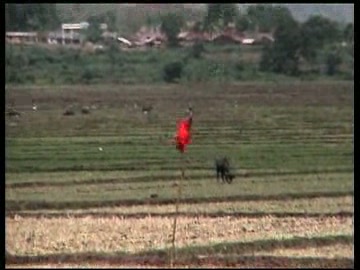 [The Times of India looks into Maoist land reform, and describes it  in contrast to the practice of the CPM, a bourgeois party that still uses, disingenuously, the name of “Communist Party of India (Marxist)”.-ed]

MIDNAPORE: It was land distribution under Operation Barga that brought CPM to power in 1977. Thirty-three years later, the Maoists in Jangalmahal are treading a similar route to consolidate their support base in 200 villages from Goaltore to Midnapore town. The 60-kilometre stretch forms the ” Maoist core zone”, where men most wanted by the police like Manoj Mahato, Asit Mahato and Gopal Pratihar have a free run.

But this new avatar of Operation Barga is different from the one implemented by the CPM. Maoists have set their own parameters for land reform here. Family income and connections with the ruling party get maximum weightage in this reform process.

The jotedars close to mainstream political parties CPM and Jharkhand Party are the targets, and the beneficiaries are the landless farmers. The Maoists have begun this process in two villages Chandabila and Malkuri under the Midnapore Sadar block, six kilometres from Midnapore town.

First, they drove out Toton Singh and Naru Singh jotedars of Malkuri village, who have 150 bighas [about 50 acres] of land and own a huge ancestral house. Like CPM zonal secretary Anuj Pandey’s house, this building too was pulled down by Maoist-led labourers of around a month and a half ago. Then the guerrillas took possession of the entire land and distributed it among 53 local landless labourers. Naru Singh’s son Ajit, who is known for his proximity to CPM minister Sushanta Ghosh, could do little to prevent it. END_OF_DOCUMENT_TOKEN_TO_BE_REPLACED