Up to 3,500 employees for the Brazilian arm of Apple’s iPhone manufacturing partner Foxconn allegedly went on strike late last week, causing a factory-wide shutdown of production. The strike is still reportedly in effect at the factory in Jundiai, Brazil.

9to5Mac has received a number of tips and translated local news reports concerning the matter, and claim that every single production line had stopped when the strike was first enacted last Thursday. Workers are reportedly demanding changes to work and pay policies, and as part of the strike, have blocked other employees from entering the site. This would explain the complete halt to production.

The strike comes at a critical time for Apple, as despite record production levels, Foxconn are struggling to keep up with the amount of pre-orders that have already taken place – which are achieving record numbers.

END_OF_DOCUMENT_TOKEN_TO_BE_REPLACED

Foxconn Technology Group, the world’s largest contract electronics maker, has acknowledged hiring children as young as 14 in a Chinese factory. An internal investigation, following allegations from labor rights groups in China, found teenagers younger than the legal working age of 16 at a plant in Yantai, in northeastern Shandong province.

“This is not only a violation of China’s labor law, it is also a violation of Foxconn policy and immediate steps have been taken to return the interns in question to their educational institutions,”a Foxconn statement announced according to Reuters. The 56 underage interns found will now be sent back to their schools.

This is not the first labor scandal for Foxconn, Apple Inc.’s largest manufacturer. In Northern China September a riot broke out at a Foxconn plant assembling iPhones over living conditions at the factory’s on-site dormitories. Foxconn were forced to improve working conditions at a number of their Chinese iPhone and iPad plants following numerous reports of labor abuses and the suicide of 14 Foxconn factory workers in China in 2010.

Taiwan’s Foxconn has admitted employing children as young as 14 on assembly lines at a plant in China, a fresh blow to the tech giant that has been attacked over its treatment of staff after several suicides.

The company, which makes products for Apple and Sony, admitted it hired the underage workers as part of an internship programme, reflecting a practice rights groups said is widespread among enterprises in China. END_OF_DOCUMENT_TOKEN_TO_BE_REPLACED

Unrest at the notorious factory where Apple manufactures many of its products injures 40 employees, reportedly stems from security guards beating a worker.

The dorm brawl injured 40 people and shut down production Monday, Foxconn said in a statement. There have been reports in Chinese media that 10 people died, but the company has not confirmed any deaths.

The factory employs about 79,000 workers who make electronic components of automobiles and consumers products, including the Apple iPhone 5, according to Reuters.

Photos and videos of the aftermath were captured and shared on Chinese microblogging sites:

Foxconn said the incident began as a personal dispute around 11 p.m. and ended around 3 a.m. But word spread quickly on Chinese blogs that the fight may have been started by security guards who nearly beat a worker to death. END_OF_DOCUMENT_TOKEN_TO_BE_REPLACED

[Employees work on the Apple assembly line at the Foxconn plant in Shenzhen in southern China. Photograph: Bloomberg/Getty]

Employees work on the Apple assembly line at the Foxconn plant

Apple, the computer giant whose sleek products have become a mainstay of modern life, is dealing with a public relations disaster and the threat of calls for a boycott of its iPhones and iPads.

The company’s public image took a dive after revelations about working conditions in the factories of some of its network of Chinese suppliers. The allegations, reported at length in the New York Times, build on previous concerns about abuses at firms that Apple uses to make its bestselling computers and phones. Now the dreaded word “boycott” has started to appear in media coverage of its activities.

“Should consumers boycott Apple?” asked a column in the Los Angeles Times as it recounted details of the bad PR fallout.

The influential Daily Beast and Newsweek technology writer Dan Lyons wrote a scathing piece. “It’s barbaric,” he said, before saying to his readership: “Ultimately the blame lies not with Apple and other electronics companies – but with us, the consumers. And ultimately we are the ones who must demand change.”

Forbes magazine columnist Peter Cohan also got in on the act. “If you add up all the workers who have died to build your iPhone or iPad, the number is shockingly high,” he began an article that also toyed with the idea of a boycott in its headline.

The New York Times’s revelations, which centred on the Foxconn plant in southern China that has repeatedly been the subject of accusations of worker mistreatment, have caused a major stir in the US. Although such allegations have been made before in numerous news outlets, and in a controversial one-man show by playwright Mike Daisey, this time they have struck a chord. END_OF_DOCUMENT_TOKEN_TO_BE_REPLACED 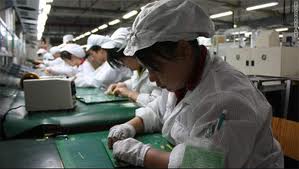 At this Foxconn plant in Shenzhen, China, 300,000 workers produce iPads, iPhones and other best-selling consumer items

The world’s largest electronics manufacturer, Foxconn Technology Group, has a plan for ending the grisly run of worker suicides that have drawn it unwanted attention over the past two years: replace human workers with one million robots. It seems the best way to interrupt rising global outrage over worker abuse in iPhone factories is to just get rid of the workers.

With a labor force of 1.2 million people, Foxconn is China’s largest private employer and biggest exporter. It manufactures familiar products for the U.S. market. Through contracts with Apple, Motorola, Nokia, Hewlett Packard, Dell and Sony, it makes the computers, phones, laptops and printers that we use every day—including the iPhones and iPads that many people will use to read this very article. END_OF_DOCUMENT_TOKEN_TO_BE_REPLACED