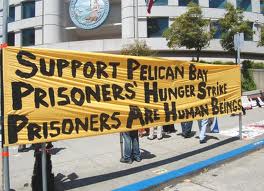 Sacramento – Family members and supporters of prisoners on strike throughout California will rally outside California Department of Corrections and Rehabilitation (CDCR) headquarters as the strike enters its 10th day. Over 1,200 prisoners continue to refuse food in an effort to force the CDCR to address their five core demands, in particular those related to long term solitary confinement, gang validation, debriefing and group punishment. Over the course of the last week, nearly 12,000 prisoners participated in the strike from thirteen California prisons, as well as California prisoners housed out of state in Mississippi, Arizona and Oklahoma, making it one of the largest prisoner hunger strikes in US history. “From the very northern most tip to the very southern most tip of California, prisoners in Security Housing Units (SHUs), Administrative Segregation Units (Ad-Seg) and general population are starving themselves because their human rights are being violated,” says Dorsey Nunn, executive director of Legal Services for Prisoners with Children, “We are not going to stand by while the CDCR tortures our loved ones.” END_OF_DOCUMENT_TOKEN_TO_BE_REPLACED

As Palestinian prisoners’ hunger strike enters its second week, international solidarity is needed now, more than ever. Prisoners are being sent to isolation in increasing numbers, family visits are being denied, families threatened and identity cards conficated, lawyer visits denied, and belongings and clothing confiscated.

On October 2, most of the Mapuche political prisoners on hungerstrike in the prisons of the Chilean state announced an end to their action while the hungerstrikers at Angol prison declared they would continue. On October 7, they released another communique explaining their struggle. The following day, after nearly 90 days without eating, they ended their hungerstrike, although without signing onto any agreement with the Chilean state.

We consider this communique to be of great importance because it clearly explains how the modifications to the antiterrorist law are simply cosmetic and do not at all guarantee the completion of the demands brought forward by this mobilization. Furthermore, and most importantly, the hungerstrikers of Angol prison want to make it plain that this action did not occur as a partial claim within the juridical realm, but as a projection of the Mapuche struggle.

This is where we see that an action such as this is not a simple pressure brought to bear against the party in power, rather it reveals the substance of what is and must be the struggle by the Mapuche against the State/Capital. A struggle that, through this kind of mobilization, continuously strengthens itself and avoids a fossilization that would prevent it from taking on a larger framework, such as a struggle for self-determination. END_OF_DOCUMENT_TOKEN_TO_BE_REPLACED

SANTIAGO – Thirty jailed Mapuche Indians ended a long hunger strike – in most cases dating back to July 12 – after reaching an agreement with the government, the archbishop who mediated the talks said.

The news, also confirmed by the spokeswoman for some of the jailed protesters, Natividad Llanquileo, was announced Friday after two extensive meetings between representatives of the Indians and the government – one in Concepcion with the participation of that southern city’s archbishop, Ricardo Ezzati, and another in Temuco with the presence of Interior Minister Rodrigo Hinzpeter.

“As is public knowledge, the government has sponsored legal reforms aimed at modifying the so-called ‘anti-terrorist law’ and the act (that allows) trials of civilians by military tribunals,” Ezzati told reporters. END_OF_DOCUMENT_TOKEN_TO_BE_REPLACED

A second wave of global protest was initiated by the families of Mapuche political prisoners and hunger strikers on Weds 18th of August. The worldwide protest took place in the following countries, Chile, Argentina, England, France and Norway amongst numerous others.

In London a demonstration of solidarity with Mapuche hunger strikers took place in front of the Chilean embassy and was a well attended and peaceful event. Amongst its supporters were UK based NGO, Mapuche International Link, the Association of Chilean ex- political prisoners in the UK, Colombian Solidarity Campaign, Latin American Coordination, Memoria Historica, and many independent pro-Mapuche sympathisers.

In Temuco, Chile, peaceful demonstrations were again disrupted by unsolicited violent police repression against the Mapuche supporters. The protest was marked by 56 arrests, including that of Catalina Catrileo sister of Matias Catrileo a Mapuche youth previously murdered by Chilean police during a peaceful land rights demonstration. END_OF_DOCUMENT_TOKEN_TO_BE_REPLACED

A campaign declaring solidarity with 31 detained Mapuche hunger strikers has attracted substantial local and international attention to the Mapuche struggle.

Below is a press release issued by Mapuche International Link:

In a declaration of solidarity with 31 detained Mapuche hunger strikers whose current medical status is of grave concern, Mapuche International Link’s (MIL) General Secretary, Reynaldo Mariqueo, will lead members of a delegation including Ms Jimena Castro and Mr. Roberto Navarrante – both of whom are members of the Association of Ex Chilean Political Prisoners -to formally declare their opposition to the Chilean government’s continued application of Pinochet-era anti-terrorism legislation against Mapuche democratic protest. The event, which will involve the presentation of a letter to the Chilean Minister Counsellor at the Chilean embassy tomorrow and is timed to commemorate the ‘International Day of Solidarity with the Mapuche Political Prisoners on Hunger Strike’ on 12 August 2010.

The meeting, which begins at 15:00pm today, 12 August 2010, will discuss the deteriorating health of the political prisoners, some of whom have been on hunger strike since July 12th, 2010. Originally, the protest broke out in response to the refusal of the Chilean authorities to recognise both the human rights of the detainees and the essentially political nature of their indictment and detention. Although news coverage of the action has been severely curtailed by a government ‘blackout’, the hunger strike has already inspired Mapuche communities in cities across Chile to take to the streets to declare their support. END_OF_DOCUMENT_TOKEN_TO_BE_REPLACED