Lawrence Hamm, Chairman of the People’s Organization for Progress,

speaks to the need to prepare, nationwide, for a powerful people’s

response to the Ferguson Grand Jury announcing their pending “decision”

on the police killing of Michael Brown

In 2014, racism is more sophisticated but no less deadly. The grand jury investigating the killing of Michael Brown is taking its time. Brown, 18, was unarmed when he was fatally shot by police officer Darren Wilson in the St Louis suburb of Ferguson, Missouri, in August. Wilson has been suspended on full pay and has not been charged. The four-month period that a panel usually convenes for expired last month. The judge gave the grand jury 60 more days to make a decision, so it has until January 7 to decide whether to indict Wilson. That’s a lot of pop.
END_OF_DOCUMENT_TOKEN_TO_BE_REPLACED 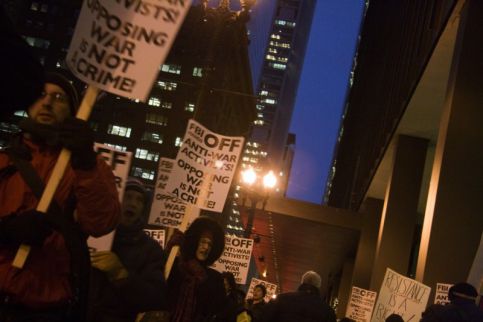 Protesters in Chicago call for an end to a government witch hunt of anti-war and solidarity activists, 6 December. (Maureen Clare Murphy)

As The Electronic Intifada reported in November, international solidarity and anti-war activists are facing a new wave of repression in the United States.

Since 24 September, two dozen activists in Minneapolis, Chicago and other cities across the country have been handed subpoenas by the FBI to appear before a grand jury.

Yesterday, Maureen Clare Murphy, an organizer with the Palestine Solidarity Group in Chicago, and managing editor of The Electronic Intifada, became one of the latest to be subpoenaed by the federal government.

In a press release issued by the Committee to Stop FBI Repression, Murphy stated, “Along with several others, I am being summoned to appear before the Grand Jury on Tuesday, January 25th, in the Dirksen Federal Building in Chicago. We are being targeted for the work we do to end US funding of the Israeli occupation, ending the war in Afghanistan and ending the occupation of Iraq. What is at stake for all of us is our right to dissent and organize to change harmful US foreign policy” (“FBI delivers subpoenas to four more anti-war, solidarity activists,” 21 December 2010).

So far, all those who have previously been summoned have refused to appear before the grand jury. No one has been arrested or charged with any crime, nor has the government specified any alleged crimes that it might be investigating. END_OF_DOCUMENT_TOKEN_TO_BE_REPLACED

Anti-war activist Meredith Aby, center, whose home was raided by FBI agents in Minneapolis, is surrounded by supporters as she addressed the media, Sept. 24.

refuse to testify before a grand jury as ordered, in a showof defiance that could land them in jail.

Attorneys for the 14 activists called to testify havecoordinated their responses since the Sept. 24 raids and have

agreed their clients won’t testify, Melinda Power, an attorney for a Chicago couple whose home was searched, said

Tuesday. Agents searched seven homes and one office in Minneapolis and Chicago. END_OF_DOCUMENT_TOKEN_TO_BE_REPLACED