[Among the more cynical acts of “humanitarian imperialism” is the invention of this “relief” program for the further humiliation and victimization of the Gazan victims of imperialism and Zionism. — Frontlines ed.]
10/17/2014

Details given in a confidential briefing this week confirm that the UN has agreed to become the chief enforcer of Israel’s ongoing siege of Gaza.

Under the guise of reconstruction, the UN will be monitoring and gathering private information about Palestinian households to be passed onto Israel, which will have a veto over which families get aid to rebuild their homes.

This was presented as part of an effort to try to entrench and legitimize the Israeli-backed Ramallah-based Palestinian Authority of Mahmoud Abbas in Gaza.
Under the arrangements, Israel will be given even more intrusive control over the lives of Palestinians in Gaza, who will be subjected to onerous ongoing monitoring as they try to rebuild their houses, communities and lives following Israel’s summer massacre.

UN agencies estimate that almost 90,000 homes must be rebuilt, in addition to hundreds of schools and other major infrastructure systematically destroyed in Israel’s attack, or degraded by years of blockade.

END_OF_DOCUMENT_TOKEN_TO_BE_REPLACED

Israel’s illegal, genocidal war on the people of Gaza has the characteristics of a massive tsunami.
Waged with even greater ferocity than Operation Cast Lead or any other assault since the Nakba of 1948 or the 1967 War, its destructive impact may even be worse. Masked as a war of “self-defense,” the euphemistically-named “Operation Protective Edge” is state violence at warp speed; it is completely indiscriminate yet calculated in its targeting of children and adult civilians, hospitals, schools, shelters, markets, and neighborhoods. So massive the onslaught, so swift the reports on social media, that my twitter feed resembles a ticker-tape machine. No one can write or speak fast enough to keep up with the body count.

As I write now, the Palestinian dead is inching toward the 2,000 mark, the injured close to 10,000; a quarter of Gaza’s population is displaced; about 10,000 homes were destroyed—including 141 schools; entire neighborhoods have been razed to the ground; morgues are filled to capacity as dead bodies lay strewn in streets, under rubble or placed in vegetable refrigerators or commercial ice cream freezers. The lack of electricity, clean water, food, sanitation, medical supplies, among other things, means a variety of infectious, nutritional and water-borne diseases are imminent.

If you are reading this, you’re probably familiar with these terrifying facts. END_OF_DOCUMENT_TOKEN_TO_BE_REPLACED

END_OF_DOCUMENT_TOKEN_TO_BE_REPLACED

[Immediately after Hamas agreed to a cease-fire, and on the eve of receiving more than $4 billion from the US to support Israeli aggression, Israel has now launched a new invasion of Gaza.  Whenever Israel loses ground and support (both active and secret) from its international allies, it resorts to new aggression against Palestinians and against its neighbors.  And when such aggression is launched, it is rewarded and paid for by the United States. — Frontlines ed.] 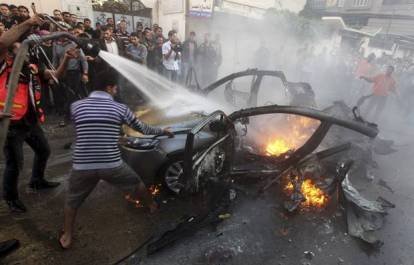 Air strike assassination of Hamas military chief signals start of major operation…Palestinians extinguish fire from the car of Ahmed al-Jabari after it was hit by one of several Israeli air strikes in Gaza City.  (Reuters)

Israeli troops massed on the Gaza border last night, poised for a possible ground invasion as Israel launched a major military operation it said was designed “to severely impair the command and control chain of the Hamas leadership, as well as its terrorist infrastructure.”

Military sources told The Independent that a ground invasion was “a distinct possibility”. The army has deployed extra infantry units near the Gaza border, halted major exercises, cancelled soldiers’ leave and mobilised some reserve forces.

The opening salvo of Operation Pillar of Cloud was the pinpoint assassination by missile of the Hamas military commander, Ahmed al-Jabari, as he drove through Gaza City, followed by aerial attacks against targets throughout the Hamas-controlled enclave. At least seven Palestinians, including civilians, were reported dead.

Gaza residents ran for cover as Israeli aircraft pounded targets across the Gaza Strip. It was the most extensive assault since Israel’s ill-starred ground invasion ended in January 2009. END_OF_DOCUMENT_TOKEN_TO_BE_REPLACED

The Ahrar Center for Detainees’ Studies and Human Rights reported that Israeli soldiers kidnapped 292 Palestinians in October from different parts of the West Bank, including 26 children.

Fuad al-Khuffash, head of the Ahrar Center, stated that nine of the kidnapped Palestinian are from the Gaza Strip, while the rest (283) were kidnapped from their homes, and on roadblocks, in different parts of the West Bank.

The Center said that Jerusalem witnessed the highest leveled of arrests as the army kidnapped 103 Palestinians, including seven children, five women, and five journalists.

Hebron comes next in the highest number of arrests, as the soldiers kidnapped 70 residents, including 9 children and three women, including the Noura Al-Ja’bary, the wife of detainee Mohammad Abu Warda.

Al-Khuffash stated that, compared to September, October witnessed an increase in the number of arrests carried out by the Israeli army, as the soldiers kidnapped 292 Palestinians compared to 246 in September.

Israeli soldiers conduct invasions and arrests on a daily basis in the occupied Palestinian territory, number of arrests vary from day to day.

These arrests include breaking into Palestinian homes causing extensive damage, harassing and assaulting family members of the detainees.

It is worth mentioning that the army killed fifteen Palestinians in the Gaza Strip in October, in repeated Israeli air strikes and bombardments.

[Mr. Neumann admitted that he took part in displacing Palestinians from their villages.]

Dozens of Israeli army veterans have admitted their involvement in massacres against Palestinian civilians in 1948, and acknowledged that Zionism misled them and is a catastrophe for both Jews and Arabs. The details have been revealed by the Yazkern organisation, which was founded in 2001 and seeks to unveil the truth and spread the Palestinian narrative of the country’s history among Israelis and convince them of Zionism’s false account. The organisation believes in a one-state solution and in Palestinians’ right to return to their land and homes.

Israeli army veteran Amnon Neumann is 82 and from Haifa. He said that he was a member of the Palmach, the elite fighting force of the Haganah, the underground army of the Yeshuv Jewish community during the period of the British Mandate of Palestine. Neumann joined the Palmach in 1946 after he came to Palestine from Poland at the age of 16. END_OF_DOCUMENT_TOKEN_TO_BE_REPLACED

GAZA CITY — Israeli airstrikes on the Gaza Strip have killed up to 12 Palestinians, mostly militants, in the worst flare-up of violence along the restive border in months.

The leader of a militant group is among the dead. Israel said it struck after Palestinians had launched rocket attacks from the territory.

Over 40 rockets were fired from Gaza into towns and cities in southern Israel, according to Israeli sources. Eight people are reported injured, one seriously.

The violence escalated after two militant leaders died when an Israeli air strike blew up a car in Gaza City.

One of them was Zohair al-Qaisi, said to head the Popular Resistance Committees armed group. Israel says he was targeted as he was planning an attack.

A spokesman for Gaza’s Hamas Islamist government held Israel responsible for what he called “a grave escalation”.