[Carlos Montes, a prominent leader of Chicano people in Los Angeles for nearly 5 decades, is the latest target of FBI raids aimed at international solidarity activists.  June 16, the same day as the court hearing in his case in Los Angeles, the Committee to Stop FBI repression is leading demonstrations nationwide to protest this repression and to pledge further deepening and broadening of the international solidarity movements.  See stopfbi.net for more information. — Frontlines ed.] 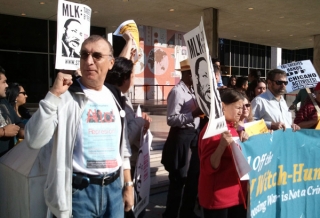 Activist Carlos Montes, a familiar face in the 1960s Chicano Movement, moved to Alhambra 20 years ago because he saw it as a peaceful enclave that was close to his homebase of East Los Angeles. He had a rude awakening on May 17 when the FBI and deputies from the Los Angeles Sheriff’s department executed a search warrant on his home. He was arrested after the search turned up a firearm. Montes speaks to The Alhambra Source on his history with activism, and what he alleges is the FBI’s agenda of targeting activists like him.

You were a co-founder of the Brown Berets. How did it begin?

It started as a civic youth group. It became the Young Chicanos for Community Action, and then it got more involved in direct grassroots organizing. Then it became the Brown Berets, and we dealt with the issues of education and police brutality. It started small, but once it took on a broader view of the political situation it grew really fast. It became part of the movement of the 60s. I grew up in East LA, so I saw the police mistreating the youth. We’d cruise down Whittier Boulevard with the music on in the car and we would be harassed by the sheriffs. And in the schools the students were mistreated and the classes were overcrowded. END_OF_DOCUMENT_TOKEN_TO_BE_REPLACED

FBI agents, who raided the home of Mick Kelly and Linden Gawboy, took with them thousands of pages of documents and books, along with computers, cell phones and a passport. By mistake, they also left something behind; the operation plans for the raid, “Interview questions” for anti-war and international solidarity activists, duplicate evidence collection forms, etc. The file of secret FBI documents was accidently mixed in with Gawboy’s files, and was found in a filing cabinet on April 30. We are now releasing them to the public.

The raid at the Kelly/Gawboy home was one of the many coordinated raids at Minneapolis homes and the offices of the Anti-War Committee on September 24, 2010. Two additional homes were raided in Chicago. To date, 23 anti-war and international solidarity activists have received subpoenas to appear in front of a Chicago Grand Jury headed by U.S. Attorney Patrick Fitzgerald.

Taken as a whole, the secret FBI file shows the willful disregard for the rights of anti-war and international solidarity activists – particularly the first amendment rights to freedom of speech and association. The documents make it clear that legal activity in solidarity with the peoples of Colombia and Palestine is being targeted. The documents use McCarthy-era language, which gives one the feel that the 1950s red scare has returned. And finally, the documents show the chilling plans for the armed raid that took place at the home of Kelly and Gawboy on September 24, 2010. END_OF_DOCUMENT_TOKEN_TO_BE_REPLACED 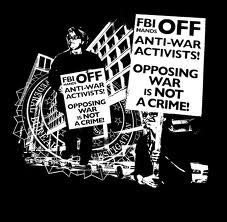 The cold winds of political repression have begun to blow a little colder. The widening FBI probe of the anti-war and solidarity movements–launched with coordinated raids in Minneapolis and Chicago in September, 2010–attests to the expanding reach of Washington’s repressive apparatus. The new face of domestic repression is characterized by rapidly developing technical capacity for surveillance and data sharing, the integration of local policing into the national security system and a blurring of boundaries between private and government police functions and goals.

Repression–the use of state power to limit political action and discourse–doesn’t develop in isolation. It compensates for the weakening of other, less intrusive methods for ensuring social stability. Today it corresponds to growing economic inequality driven by the flight of manufacturing, the demolition of public sector services, the decline of union power and the ascension of a ravenous financial sector. These changes severely strain the mechanisms that maintain popular consensus.

Our task in the following pages will be to note current trends in political and social police repression, identify some of the systemic vulnerabilities they betray and to find points of leverage from which to launch a pro-democracy counteroffensive. We are experiencing a system-wide assault on the democratic public space that, besides police activity, encompasses attacks on academic expression, criminalization of whistle-blowing, corporatization of elections and hobbling the open internet. Piecemeal, defensive strategies will not be adequate. We will need to mount a challenge to the repressive enterprise as a whole. In particular I would assert that our strategy should promote solidarity and cooperation among the sectors that bear the brunt of repression but have historically remained separate in their responses. END_OF_DOCUMENT_TOKEN_TO_BE_REPLACED