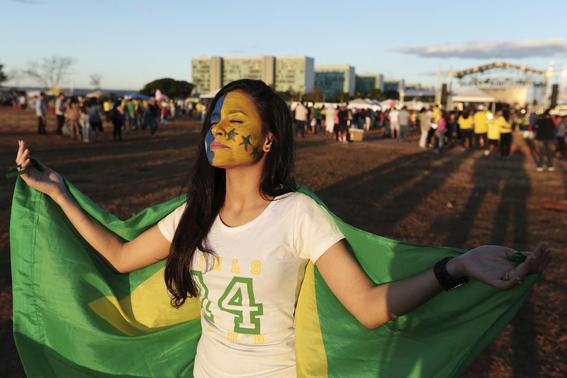 An evangelical Christian is pictured as they march during the ‘Jesus Parade’ in downtown Brasilia August 14, 2014.

(Reuters) – Brazil’s increasingly powerful evangelical Christians are tantalisingly close to electing one of their own as president next month in what would be a historic shift for the world’s largest Catholic nation.

Marina Silva, an environmentalist running neck and neck in polls with incumbent President Dilma Rousseff, is a Pentecostal Christian who often invokes God on the campaign trail and has said she sometimes consults the Bible for inspiration when making important political decisions.

Some 65 percent of Brazil’s 200 million people are Roman Catholics but evangelicals are rapidly gaining followers and power. END_OF_DOCUMENT_TOKEN_TO_BE_REPLACED