Wedged between the two rising Asian powers of China and India, landlocked Nepal watched rescuers and offers of help pour in from both sides within hours of an earthquake that killed more than 4,000 people.

India, the traditional power in the region, launched Operation Friendship soon after the quake Saturday. It has sent the most help so far, deploying 13 aircraft and more than 500 rescuers as well as water, food, equipment and medical supplies.

China, increasingly making inroads in Nepal through everything from infrastructure investment to increased tourism, also pledged all-out assistance within hours of the disaster. It has sent 62 rescuers plus blankets, tents and generators and announced plans to send four planes and an additional 170 soldiers.

The largesse of recent days is a microcosm of something much larger. It represents a subtle brand of disaster politics, a curious but understandable focus on strategically located Nepal, one of the poorest nations in its region but — clearly — a pocket of regional importance for powerful neighbors jockeying for position.

END_OF_DOCUMENT_TOKEN_TO_BE_REPLACED

Violence was reported at the Van prison in earthquake-hit southeastern Turkey.
Witnesses reported hearing gunfire from within the prison walls, and parts of the facility were seen to be on fire on Tuesday evening.
Al Jazeera’s Anita McNaught reports from outside the prison in Van, Turkey.
Prisoners reportedly set fire to the jail because guards refused to move them to a safer spot
(Al Jazeera Youtube channel)

UN agencies in charge of refugee camps for victims of Haiti’s earthquake are inexperienced and dysfunctional, the US charity Refugees International says.

The groups say reports of gang rapes are common, and a lack of translators means UN police cannot do their job.

A UN spokeswoman told the BBC that the organisation was doing its best, but said the scale of the disaster made their job very difficult.  More than a million people were left homeless by the quake.

Former US President Bill Clinton, who has been visiting a camp, has vowed that US aid long promised to Haiti but yet to materialise will soon be released.

Refugees International, in its report titled Haiti: Still Trapped in the Emergency Phase, said the people of Haiti were “still living in a state of emergency, with a humanitarian response that appears paralysed”.  “Living in squalid, overcrowded camps for a prolonged period has led to aggravated levels of violence and appalling standards of living,” the report says. END_OF_DOCUMENT_TOKEN_TO_BE_REPLACED 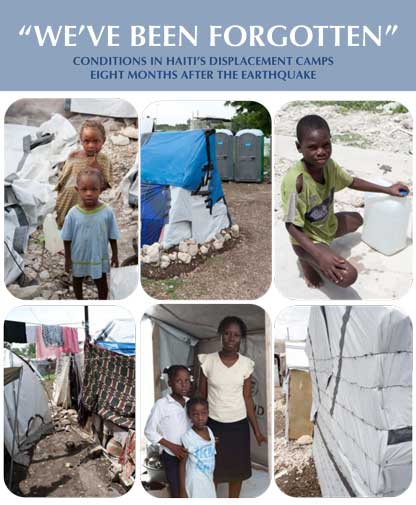 IJDH – Boston, MA – Eight months after Haiti’s devastating earthquake, more than 1.3 million Haitians continue to live in makeshift tent camps without adequate shelter, food or sanitation, according to a report released today by the Institute for Justice & Democracy in Haiti (IJDH). The report, titled “We Have Been Forgotten”: Conditions in Haiti’s Displacement Camps Eight Months After the Earthquake, documents continuing desperation in Haiti’s camps and recommends a rights-based approach to relief and reconstruction. Despite the international community’s historic generosity following the January 12, 2010 earthquake, the support has not been translated into effective assistance for the residents of approximately 1,300 makeshift tent camps, where conditions for some are getting worse, not better.

“The basic needs of residents must be prioritized immediately. While the Government of Haiti bears the primary duty to protect the economic and social rights of its citizens, donor states and relief agencies must also meet certain standards in carrying out assistance to Haiti. This obligation arises from international law but also from the significant role the international community assumed in providing relief services in Haiti,” said Nicole Phillips, Esq., IJDH Staff Attorney and the lead editor and coordinator of the report. END_OF_DOCUMENT_TOKEN_TO_BE_REPLACED