Anger, frustration and tension are growing in parts of rural Nepal over the slow pace of relief efforts. Kathmandu also found protests over bus arrangement for going back to rural homes. Badly-affected villages are yet to receive any assistance. Survivors broke into government offices in Dolakha district to demand relief supplies. Survivors confronted prime minister Sushil Koirala in a Kathmandu hospital. There are long queues for food and water around Kathmandu.

Official death figure during afternoon of 30 April 2015 reached more than 5,500 people, and injured at least 11,000. Only 14 survivors have been saved from the rubble till now.

Nepal’s prime minister Sushil Koirala was confronted by survivors desperate for relief deliveries when he visited a hospital in Kathmandu. Many survivors gathered in front of the prime minister to request to water, food and tents.

About 200 people blocked traffic in Kathmandu after many faced huge queues for free bus rides out of the city. The protesters confronted police and there were minor scuffles. But no arrests were made. END_OF_DOCUMENT_TOKEN_TO_BE_REPLACED 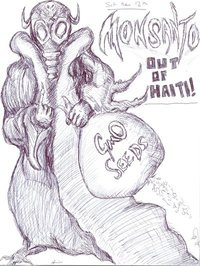 In an attempt to backdoor GMO seeds into a new market, Monsanto has taken the opportunity to donate hundreds of tons of GMO seeds to Haiti and is calling it an effort to help the people in Haiti with earthquake relief. However, Monsanto’s “generosity” is being met with skepticism and outright rejection.

Recently, a large group of small farmers burned a symbolic quantity of Monsanto’s donated hybrid corn seed in the central square of the agricultural town of Hinche. A 200,000-member national coalition is encouraging Haiti farmers to burn all Monsanto seeds that have already been distributed, and has called on the government to reject additional shipments.

Peasant leader Chavannes Jean-Baptiste told IPS News: Farmers want to preserve their traditional “organic agriculture that respects the environment and fights against its degradation. We defend native seeds and the rights of peasants on their land.” Jean-Batiste also said “Fighting hybrid and GMO seeds is critical to save our diversity and our agriculture” and maintained that a “county has a right to define it own agricultural policies, to grow first for the family and then for local market, to grow healthy food in a way which respects the environment and Mother Earth.” END_OF_DOCUMENT_TOKEN_TO_BE_REPLACED