One of the fundamental questions with regard to the critique of — and activism against — the Israeli occupation: How does this connect up with other social movements, and other struggles? Is the case of Israel and Palestine so specific, so complex, as to resist analogy? And if so, what does that mean for those who would be inclined to sympathize with the plight of the Palestinians, but unable to see their way clear to act in solidarity with them, as they might for others? END_OF_DOCUMENT_TOKEN_TO_BE_REPLACED

[The campaign to stop the export of Israeli goods via the ZIM shipping line continues to have significant effect on the Israeli economy and on the growing strength of the BDS movement worldwide.  The article below analyzes the impact of this campaign, and announces a “Block the Boat” action for October 25.  And another action has been announced by the Stop ZIM Action Committee for this Saturday, September 27:  “Palestinian Boycott, Divestment and Sanctions National Committee (BNC) Endorses September 27th community picket of Zim Shanghai at Port of Oakland. …Citing the historic four-day blockade of the Zim Piraeus initiated by the Block the Boat coalition last August, the endorsement salutes Oakland dockworkers and community activists for their ‘principled, ongoing and effective solidarity with the Palestinian struggle for freedom, justice and equality’….The Stop ZIM Action Committee, an ad hoc committee formed to organize the September 27th blockade, appeals to all activists to join the picket lines when the Zim Shanghai arrives. We are currently projecting the first assembly at the West Oakland BART Station at 5am on Saturday, September 27th. Please text ‘Join’ to 88202 or monitor @StopZimOak on Twitter for updates closer to the picket date, since the ship may arrive earlier or later.”  —  Frontlines ed.]

Nothing is more crucial to the success of BDS than the movement’s relationship with organized labor.

Over the past year, the boycott, divestment, and sanctions (BDS) campaign has finally gained some widespread political attention in the United States: from the American Studies Association’s vote to endorse the academic boycott of Israel, to the flurry of student votes for divestment at the University of California and other US campuses, to the unprecedented criticism that met Scarlett Johansson when she quit her role as global ambassador for Oxfam so she could continue as global ambassador for SodaStream.

Last month’s protests at West Coast ports point not only to the momentum with which BDS has moved forward – more quickly than most activists could have predicted – but also to the possibility of direct action posing an ever graver threat to business as usual for Israel, particularly when organized labor is on board.

Until now, no one had ever kept an Israeli cargo ship from unloading for two consecutive days; we blocked the Zim Piraeus for four.

From Saturday, August 16 to Tuesday, August 19, activists at the Port of Oakland protested Israeli human rights abuses by picketing the berths where the ship intended to offload its cargo.

END_OF_DOCUMENT_TOKEN_TO_BE_REPLACED

Last week, more than 100 organizations worldwide — including dozens of US Campaign coalition members — signed onto a letter of support for the first Israeli sports team boycott campaign in the United States, organized by member group Minnesota Break the Bonds Campaign (MN BBC). The Israeli basketball team Maccabi-Haifa has been in the United States playing U.S. teams including the Minnesota Timberwolves. 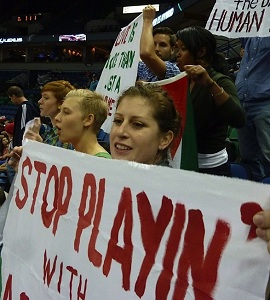 When the Timberwolves refused to cancel their game with the Maccabi, almost two dozen activists protested inside the stadium calling on the team to “Stop Playing with Apartheid!” The protestors were ejected from the game for “disruptive and inappropriate messages” (meanwhile, counter-protestors waving Israeli flags were allowed to stay). According to a press release on the MN BBC website, a legal observer and civil rights attorney was assaulted and temporarily arrested by local security and police.

In the same way that South African teams were, almost all Israeli sports teams are cynically used as ambassadors of an apartheid state. Additionally, Maccabi is sponsored by Ya’akov Shahar, chairman of Mayer’s Cars and Trucks Ltd., the official importer to Israel of Volvo. Both companies are heavily involved in the Israeli occupation, as documented by Who Profits?, an Israeli research project. Israeli sports teams like Maccabi are also notorious for racism and racial discrimination against Palestinians.

As the activists in Minnesota stated: “Love Basketball; Hate Apartheid.”

The Palestinian call for boycott, divestment, and sanctions (BDS) first made its way into U.S. basketball discourse when the US Campaign learned that legendary player Kareem Abdul-Jabbar canceled participation in an Israeli film festival following Israel’s killing of twelve unarmed Palestinian refugees attempting to exercise their internationally-recognized right of return.

For more information on this and related campaigns, see:  http://endtheoccupation.org/article.php?id=3293

For background on the international boycott of South African apartheid’s sports, see this video documentary clip, and the articles which follow: END_OF_DOCUMENT_TOKEN_TO_BE_REPLACED

RAFEEF ZIADAH is a Canadian-Palestinian spoken word artist and activist. Her debut CD Hadeel is dedicated to Palestinian youth, who still fly kites in the face of F16 bombers, who still remember the names if their villages in Palestine and still hear the sound of Hadeel (cooing of doves) over Gaza. 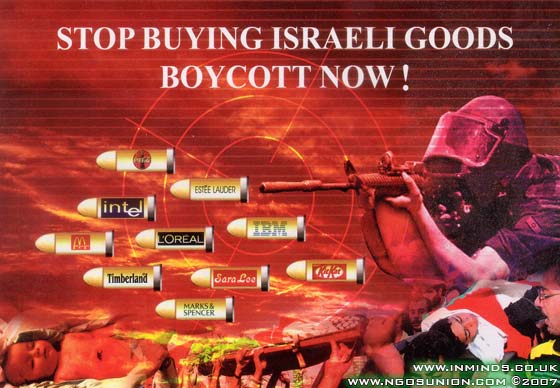 BDS stands for Boycott, Divestment, and Sanctions. On July 9, 2005, one year after the historic Advisory Opinion of the International Court of Justice (ICJ) which found Israel’s Wall built on occupied Palestinian territory to be illegal, an overwhelming majority of Palestinian civil society called upon international civil society organizations and people of conscience all over the world to impose broad boycotts and implement divestment initiatives against Israel, similar to those applied to South Africa in the apartheid era.

What are the goals of BDS?

According to the 2005 call by Palestinian civil society: Boycott, Divestment, and Sanctions are nonviolent punitive measures to be maintained until Israel meets its obligation to recognize the Palestinian people’s inalienable right to self-determination and fully complies with the precepts of international law by:

1. Ending its occupation and colonization of all Arab lands and dismantling the Wall;

2. Recognizing the fundamental rights of the Arab-Palestinian citizens of Israel to full equality; and

3. Respecting, protecting and promoting the rights of Palestinian refugees to return to their homes and properties as stipulated in UN resolution 194. END_OF_DOCUMENT_TOKEN_TO_BE_REPLACED

A sustained world-wide campaign of boycott, divestment, and sanctions aimed at Israel is needed, just as it was in apartheid South Africa, to end the many decades long oppression of Palestinians by the State of Israel.

Israel’s helicopter raid in international waters on the flotilla bringing relief supplies to Gaza, killing 9 peace activists, has been severely condemned by the entire world, barring the pro-Israel lobby in the US, for which there is no atrocity Israel can commit that it would not try to justify. India’s reaction, however, was extremely disappointing. A general condemnation of violence serves little purpose in this situation where the issues are clear cut and leave little room for obfuscation.

A decade ago, the former US President Jimmy Carter provoked a storm of criticism in the US for writing a book with the title “Peace Not Apartheid.” The Israel lobby, which seems to control both the legislative and the executive branches of government in the US, is treated with deference by the media, and is kowtowed to by both liberals and conservatives, severely castigated Carter for daring to equate Israel with the liberals’ bête-noire, apartheid South Africa. However, Carter’s mild rebuke of Israel over its treatment of Palestinians in the now over four decade long occupation was hardly something to get too worked up about. A few minutes of observation in the bus station behind Jerusalem Old City’s Damascus Gate, where the mini-buses leave for Ramallah in the West Bank reveals far more than any book can about what apartheid in Israel is like. END_OF_DOCUMENT_TOKEN_TO_BE_REPLACED