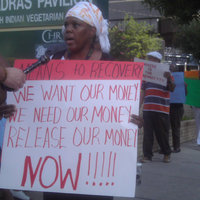 What I did not see this week were bulldozers scooping up the mountains of concrete remaining from last January’s earthquake. No cranes lifting metal beams up to create new buildings. No public works projects. No housing developments. No public food or public water distribution centers. END_OF_DOCUMENT_TOKEN_TO_BE_REPLACED