[As hundreds of millions of workers and peasants are driven by hunger, desperation, oppressive conditions and displacement to migrate in search of livable and workable conditions, governments worldwide stigmatize, harass, and force into desperate lives, all the better to divide the working class, heighten xenophobia, and exploit in slave-like conditions.  In the UK, migrants, refugees, and asylum-seekers are rounded up and stuffed into detention centers–prisons, by all estimates.   But the migrants have organized and waged collective protests, as prisoners do, because “where there is oppression, there is resistance.”  Here is a report on the huge hunger strike in centers across Britain. — Frontlines ed.]
Source: http://www.telesurtv.net/english/news/Hunger-Strike-Continues-Over-UK-Refugee-Detention-Centers-20150319-0034.html.
http://www.teleSURtv.net/english, 19 March 2015

Harmondsworth detention center, from where up to 100 detainees were deported to Pakistan this week. | Photo: AFP

The protests began last week, and have spread across several detention centers around the country, with hundreds of refugees reported to be taking part.

Migrants across the United Kingdom continued hunger strikes Thursday in protest against the horrendous treatment of asylum seekers in detention centers.

According to asylum seeker advocacy group Detained Voices, which records stories of the experiences of refugees in detention centers, a number of refugees were sent back to their home countries Wednesday. A source, known only as “Chowdery,” told RT that detainees were calling  for the cancellation of a deportation flight to Pakistan, while another said that 100 asylum seekers were due to be deported.

END_OF_DOCUMENT_TOKEN_TO_BE_REPLACED

African migrants hold signs and gesture as they protest against Israel’s detention policy toward them, from inside the fence surrounding Holot, Israel’s southern Negev desert detention centre February 17, 2014

reuters/Amir CohenIsrael has been accused of using unlawful detention and restrictive asylum policies to try to pressure 51,000 Eritrean and Sudanese migrants into leaving the country.

A fresh report by New York-based Human Rights Watch (HRW) concluded that the Israeli government created “convoluted legal rules” to get around international and domestic law about protection of refugees and used the insecure legal status of Eritrean and Sudanese migrants to detain them indefinitely.

The asylum-seekers find themselves in a coercive position with the choice of living in fear of spending the rest of their days locked up in desert detention centres” or risking life-threatening abuse back home.

“Destroying people’s hope of finding protection by forcing them into a corner and then claiming they are voluntarily leaving Israel is transparently abusive,” Gerry Simpson, senior refugee researcher at HRW and author of the 83-page report, said. END_OF_DOCUMENT_TOKEN_TO_BE_REPLACED

Just moments ago, dozens of undocumented immigrants and allies peacefully sat down in front of the San Francisco offices of Immigration and Customs Enforcement (ICE) and blocked a bus filled with community members en route to deportation.

The action is occurring at 630 Sansome Street in San Francisco.

Today’s protest marks the expansion of a national movement to pressure the President to use his existing executive authority to halt painful deportations of immigrant community members – a move which will bolster efforts in Congress to win inclusive immigration reform with a path to citizenship for the nation’s 11 million undocumented Americans. END_OF_DOCUMENT_TOKEN_TO_BE_REPLACED

Thousands of French teenagers protested for the second day over the public deportation of an Albanian-Kosovar girl and an Armenian student. The issue caused disruption in 50 schools across France.

Teenagers clashed with police, who used tear gas against the high-school students.

Students climbed bus stops and shouted demands for the interior minister Manuel Valls to leave office. According to France 24, one school became a scene of green garbage cans piled on top of each other, while above hung a banner with the words ‘Education in danger.’

The catalyst for the event was the expulsion of a 15-year-old Romani girl, a native of Kosovo. Leonarda Dibrani was forcefully taken off a school bus in front of her classmates while the group was on a trip earlier this month. The incident took place in the eastern town of Levier.    END_OF_DOCUMENT_TOKEN_TO_BE_REPLACED

“The Jews of Our Time?”: Israel’s Deportation of the South Sudanese”

Planeloads of South Sudanese refugees from Israel have been landing in South Sudan’s capital of Juba over the past few weeks. Many of them had been living in the poor neighborhoods of Hatikva and Shapira in southern Tel Aviv, working in such jobs as hotel chambermaids or waiters. Israel has justified the deportations with the explanation that because South Sudan seceded from Sudan in July 2011, the refugees can now return to their home country without fear. Their calls deliberately disregard ongoing violence between Sudan and South Sudan as well as aggression between rival South Sudanese groups.  The Interior Ministry announced that the South Sudanese would receive 1,250 US dollars if they returned voluntarily and would face arrest and expulsion if they refused.

Israel hosts approximately sixty thousand African refugees (termed “infiltrators” in Israeli parlance), mainly from Eritrea and Sudan. Most, fleeing violence and instability, have entered Israel through Egypt over the past five years. Israel is barred from deporting Eritrean or Sudanese refugees, as the United Nations has declared that doing so would put their lives in danger. Though South Sudan’s refugees constitute only a small fraction of African refugees in Israel, approximately seven hundred total or 0.1 percent of all refugees, the deportations have highlighted at least two noteworthy trends. The first is Israel’s resort to forcible and racially driven expulsions in an effort to retain its majority Jewish makeup. Second is the claim by some South Sudanese of a kind of essentialized religious, historical, and cultural affinity with Israel in order to foster a strategic bond.

Just prior to the deportations, xenophobic manifestations of Israel’s imperative to retain its Jewish majority were clear. At an anti-refugee demonstration in Hatikva on 24 May, Likud Member of Parliament Miri Regev stated from the stage, “The Sudanese are a cancer in our body.” A week later Israeli crowds chanted, “Deport the Sudanese” at a similar demonstration in Shapira. Other politicians have also added fuel to the fire. Interior Minister Eli Yishai recently claimed that African refugees were raping many Israeli women who “do not complain out of fear of being stigmatized as having contracted AIDS.” He recently added, “Israel belongs to the white man.” A number of South Sudanese arriving in Juba have described their recent treatment in Israel as brusque, marked by visa confiscations and arrests that barred them from clearing their Israeli bank accounts or receiving final paychecks.

Though it might not be obvious from these recent events, Israel has consistently supported southern Sudan, particularly during its first civil war with the north, and it was among the first countries to recognize South Sudan as a sovereign state last year. To Israel, South Sudan is another formerly-enslaved nation that escaped the clutches of Muslim violence and intolerance. In turn, it is often seen as “black” and “Christian” versus its “Arab” and “Muslim” neighbor to the north, though the makeup of Sudan and South Sudan is more complex than this simple division suggests. As the Sudanese academic and politician Francis Deng has consistently argued, the ideas of “racial, cultural and religious homogeneity…oversimplify and falsify a dynamic picture of pluralism [in Sudan/South Sudan].”

This simple dichotomy begets the powerful notion that South Sudan is an ally to Israel in a hostile part of the world, particularly in regard to Omar al-Bashir’s regime in Khartoum. Al-Bashir’s alliance with Iran and Hamas has particularly riled Israel, with Sudan serving as a way station for Iranian weapons en route to the Sinai Peninsula and ultimately to the Hamas-controlled Gaza Strip. As Galia Sabar of the Department of Middle Eastern and African History at Tel Aviv University recently said, “We have a phenomenal interest in South Sudan, a Christian country in the heart of an area of great importance to us.” South Sudan presents itself along similar lines. Salva Kiir, South Sudan’s president, visited Israel in December 2011 and made such remarks as: “We have shared values. We have waged similar struggles, and we will go hand-in-hand with Israel in order to strengthen and enhance bilateral relations.” In Juba, Israeli flags are prevalent, and one neighborhood goes by the name Hai Jerusalem (Long Live Jerusalem).

As a result of this perceived affinity, some Jewish, both American and Israeli, and South Sudanese leaders alike have registered shock at the deportations. Charles Jacobs, president of the American Anti-Slavery Group, wrote an op-ed in the Jerusalem Post that called the South Sudanese “a special people” deserving of special treatment. He recounted that many American Jews, upon learning years ago of how the Muslim north was oppressing and killing those in the south, “saw [them] as ‘the Jews of our time.’” “We should continue to treat them as the very special people they are,” he concluded, asking for the refugees to have “a bit more time” to make arrangements to return home.  END_OF_DOCUMENT_TOKEN_TO_BE_REPLACED

[In yet another move to stem the growing tide of support and solidarity for the people of Indian-occupied Kashmir, the Indian government has deported (upon arrival) the US writer, journalist, and radio show host David Barsamian.  Such attempts to censor and block the international flow of information and solidarity must be condemned by people everywhere.  This attempt to block the flow of information about the occupation of Kashmir and the struggles of the Kashmiri people, is too late:  the word is out.  This deportation will not protect the Indian government and its occupation–indeed, it only exhibits the repressive and undemocratic character of the Indian State for all to see, and denounce. — Frontlines ed.] 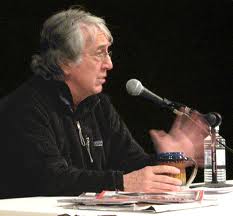 David Barsamian was deported on arrival from the Indira Gandhi International Airport.

Srinagar, New Delhi —  United States-based broadcaster and author David Barsamian, known for his trenchant criticism of US foreign policy, was deported on arrival from the Indira Gandhi International Airport early this morning.

Officials said he was deported for allegedly violating the terms of his visa during his last visit. He had published reports on his visit — which needs a journalist’s visa — while he was on a “tourist visa,” they said. This time, too, he had a tourist visa.

Barsamian was scheduled to travel to Srinagar next week, said Khurram Parvez, coordinator of Association of Parents of Disappeared Persons (APDP), in connection with the report by a state human rights probe panel on the over 2000 unmarked graves in north Kashmir.

“He had delivered lecturers here in December 2008 and then again came in February earlier this year,’’ said Parvez. “We were planning to take him to visit the unmarked grave sites. He has done several interviews on Kashmir earlier.” END_OF_DOCUMENT_TOKEN_TO_BE_REPLACED

Gutierrez' skull had to be removed after a tussle with CBP agents, who won't provide surveillance or specifics

Forty-one-year-old Jose Gutierrez has lived in the U.S. since he was a kid. Until three weeks ago, he shared a house in the affluent Valley neighborhood of Woodland Hills with U.S. citizen Shena Wilson and their two children, held a solid job as a film engineer and served as frontman for the popular Spanish-rock band FZ10.

However, Gutierrez is undocumented.

After the L.A. Immigration Court deported him on March 21, Wilson says she lost touch with her husband, but guessed he would try to come back, seeing as their youngest — a five-month-old baby girl — was in the hospital. (Not to mention he has no roots in Mexico.)

The next she heard of him, Gutierrez was in a coma at St. Joseph’s Hospital in Phoenix.

Wilson got a call from the Mexican consulate in Yuma, Arizona, saying, “We have to let you know that there has been an accident.” END_OF_DOCUMENT_TOKEN_TO_BE_REPLACED