[It took six years of mass struggle, keeping the spotlight of the world on New Orleans and Katrina, and the determined and unstoppable push of the victims families, to force this verdict out of a system that was blocking justice at every turn.  — Frontlines ed.]

By Times-Picayune Staff  — A jury this morning convicted all five New Orleans police officers accused in the Danziger Bridge shootings, which took place amid the chaos after Hurricane Katrina and claimed the lives of two civilians, and a cover-up of startling scope that lasted almost five years. 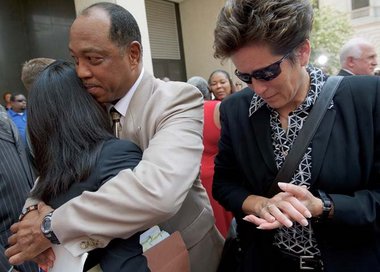 Lance Madison, left, whose brother, Ronald, was shot and killed on the Danziger bridge by New Orleans Police September 5, 2005, and who was jailed for allegedly shooting at police, gets a hug from prosecutor Cindy Chung next to lead prosecutor Barbara "Bobbi" Bernstein, right, Madison thanked the jury and the federal authorities who brought the case, while noting he will never get his brother back in front of Hale Boggs Federal Court Friday, August 5, 2011 in New Orleans, La. MATTHEW HINTON / THE TIMES-PICAYUNE

The verdicts were a huge victory for federal prosecutors, who won on virtually every point, save for their contention that the shootings amounted to murder. The jury rejected that notion, finding that the officers violated the victims’ civil rights, but that their actions did not constitute murder.

Sentencing for the five officers, all of them likely facing lengthy prison terms, has been set for Dec. 14 before U.S. District Judge Kurt Engelhardt.

Four of the five officers — Kenneth Bowen, Robert Gisevius, Robert Faulcon and Anthony Villavaso — have been in custody since their arraignment.

The fifth, retired Sgt. Arthur “Archie” Kaufman, who was not involved in the shootings but headed the police investigation into them, remains free on bail.

In remarks on the courthouse steps shortly after the verdicts were rendered, lead prosecutor Barbara “Bobbi” Bernstein said she was “in awe” of the relatives of the bridge shooting victims. Without their persistence, she said, the truth about the incident would never come to light. END_OF_DOCUMENT_TOKEN_TO_BE_REPLACED