Writer Arundhati Roy doesn’t speak in public often, but she packs a punch when she does. The most recent occasion was the launch of a Tamil translation of BR Ambedkar’s Annihilation of Caste, which includes a detailed introduction and annotations by Roy.

The writer is currently facing criminal trial for contempt of court for an article she wrote about Dr Saibaba’s incarceration in 2015. Her speech covered topics ranging from civil rights movements across the world to situation in India today.

END_OF_DOCUMENT_TOKEN_TO_BE_REPLACED

Sam Jones,  guardian.co.uk, Friday 30 November 2012
A coalition of community groups, human rights organisations and politicians has renewed its call for the government to tackle caste discrimination in the UK by introducing legal protection for those from traditionally lower status Asian backgrounds.

Although a section of the Equality Act 2010 could offer lower-caste Asians a legal safeguard against discrimination, it has not been activated despite repeated demands from campaigners.

Supporters of the legislation say the law is needed to prevent discrimination at work, in the classroom and in the health service. END_OF_DOCUMENT_TOKEN_TO_BE_REPLACED

More often than not, Arundhati Roy speaks unwelcome truths, truths that essentially do not go down well with the elite class. And hence she always gets dubbed as outspoken and is being criticized for that. She was recently in the headlines for speaking out against Indian rape culture in the back drop the gang rape at New Delhi and the mass protests that drew attention all over.

She recently noted that India lives simultaneously in several centuries. While nearly 10 Indian industrialists make it to the first 50 in the Forbes World Richest Men List, the capital of India is dubbed as ‘The Rape Capital’ and is a combination of incredibly crowded, ill-smelling slums; wide modern roads and elegant villas; the extremely poor and wretched; the fabulously wealthy and super-indulgent, and yet unable to protect its women traveling in buses. Speaking to Channel 4 on the recent gang rape of a 23-year old women in a running bus in Delhi, she asks critical questions on how and why and could this case be an exceptional crime demanding widespread protests; something which was uncommon in many prior instances of violence against women mete out by the Upper Class, Police and Armed Forces.

There is no doubt, the cruelty of the gang rape in a running bus at New Delhi is brutal and the culprits should be given maximum punishment in a model way. Our thoughts and prayers must be there with the girl who had her whole life tormented within a night’s bus journey.

Having said that, the present case does not stand vindictively different from the many of the rape cases registered earlier in Delhi . So what makes it a flare point for youngsters to protest at India Gate daring to defy the water cannons of Delhi police? END_OF_DOCUMENT_TOKEN_TO_BE_REPLACED

[The oppressive conditions of Dalits by the Hindu caste system — fostered, historically, with active enforcement by British colonialism, and later formally outlawed but still deeply rooted in India today — has led to countless attacks and ongoing resistance.  The attack on Dalits by upper-caste in 2010, has ongoing effects in both fear and struggle.  Below this article, see the video documentary on the Mirchpur attack.  —  Frontlines ed.]
——————————-
GAUTAM DHEER CHANDIGARH, Deccan Herald, October 12, 2012

Even after nearly two years of the infamous Mirchpur village incident in Haryana that shocked the nation over the killing of Dalits and burning of their houses by some upper caste people, over 70 affected families refuse to return to their homes.

They fear for their lives and property. Since 2010, these families have been camping with whatever little they are left with in makeshift hutments at a farmhouse on the outskirts of Hisar.

The recent incidents of rape in Haryana – including the shocking case which forced Congress president Sonia Gandhi to reach the doorsteps of the family of a minor Dalit girl who immolated herself after being gang raped – have left women feeling vulnerable.

Vexed over a spate of crime against women, several Dalit activists will now gather in Panipat on Sunday under the aegis of the National Campaign on Dalit Human Rights to draw an action plan to deal with the ‘deteriorating situation’.

They plan a massive protest by Dalit women next month at Delhi’s Jantar Mantar.   General secretary of the All India Dalit Mahila Adhikar Manch, Asha Kotwal, said the idea is to make the authorities act.   “We will hold a meeting in Panipat, and later hold rallies in the state’s towns and villages where recent reports of atrocities against Dalit women have surfaced,” she said.

Advocate and state coordinator of the forum Savita Singh said enforcement of the provisions of the SC and ST Act was poor in Haryana. She said apart from rapes, Dalits are humiliated in many other ways. In some instances, people belonging to influential upper castes still won’t permit Dalits to share their water source, she said.

See this video for documentation on the horrific attack on Dalits in Mirchpur in 2010: END_OF_DOCUMENT_TOKEN_TO_BE_REPLACED

at the Maruti Suzuki will only lead to a greater unrest”

New Delhi, August 21. Various mass organisations, unions and social activists staged a protest demonstration at Jantar Mantar today against the arbitrary expulsion of hundreds of workers Maruti Suzuki  by the management and the continued persecution of the workers. The protestors also submitted a memorandum to the union labour minister to revoke the suspension of the workers.

It is to be noted that tha Manesar plant of Maruti Suzuki has opened today itself after a month long lockout. However the management has announced the expulsion of the 500 permanent workers. Also the future of more than 1500 contract workers remains uncertain. The company has threatend to terminate more workers in future.

Despite heavy rainfall since morning, large number of workers and activists coming from Delhi, Ghaziabad, Noida and Gurgaon took part in the demonstration. 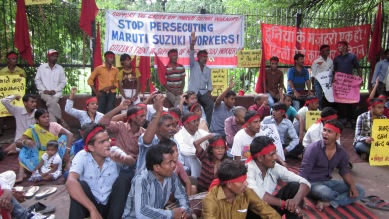 While strongly condemning the dictatorial decision of the Maruti Suzuki management, the speakers said that the anti-labour attitude of Haryana government and the Central government stands exposed through their support to this act of pushing the hundreds of workers and their families on the street.

The speakers mentioned that the incident of July 18 at Maruti Suzuki Manesar was not a planned act of violence but an explosion of workers’ anger against the company’s policies which had accumulated over a period of time. But the company has waged a campaign to brand the workers as a “murderous mob” and “criminals” and by puttting all the legal conventions on the back burner the police is on look out for the workers merely on the F.I.R. of one side. Nobody bothered to understand what caused the workers, who were increasing the company’s profit through their hard labour, to take the violent course. END_OF_DOCUMENT_TOKEN_TO_BE_REPLACED

Several incidents of caste atrocities on Dalits have been committed by the dominant caste forces in different parts of the country – spanning from Bolangir of Odisha to Lakshimpeta of Andhra Pradesh and recently in Bhagana in Haryana, in Uttar Pradesh, Bihar and in other places. While the massacre of five Dalit peasants in a gruesome manner in Lakshimpeta village by dominant caste landowners and rich peasants have shaken the country, other incidents of casteist attacks like the burning of houses and assault on 60 dalit families in Bolangir or the social boycott and banishing of 128 Dalit families in Bhagana have not attracted much attention from the progressive and democratic sections of the country. In Lakhsimpeta, the landed section of the Backward Caste Kapus have adopted the brahmanical ideology as a result of their acquisition of private property – most importantly, land, and became perpetrators of caste violence on the ‘untouchable’ Mala people. Lakshimpeta massacre also involves the questions of dam and displacement, since the people of the village are evictees of a dam constructed by the government. While other evictees got compensation and land from the government, Dalits could get nothing and lost everything due to this forced displacement. END_OF_DOCUMENT_TOKEN_TO_BE_REPLACED

Yet another massacre on dalit people in Andhra Pradesh shows that the landowning castes still turn violent when dalits assert themselves to take over land.  Four dalit people were hacked to death, and about 30 dalit men and women were critically injured in a well-orchestrated attack by Turpu Kapu backward caste brahmanical forces in Lakshimpeta village of Vangara block in Srikakulam District on 12 June 2012. The brahmanical forces targeted 60 dalit families in the village with crude and brutal weapons like bombs, sickles, hatchets and axes supported and patronised by the ruling Congress Party leaders of the region. Burada Sundara Rao (45), Chitri Appadu (35), Nivarti Venkati (65) and Nivarti Sangameshu (40) died in the bloodbath. Bodduru Papaiah died in King George Hospital, Vishakhapatnam on 20 June while taking treatment. With his death, the number of people killed in the massacre increased to five.

Land was acquired by government for Madduvalasa reservoir built on two tributaries of Nagavali river, Suvarnamukhi and Vegavathi which, while displacing thousands of people irrigated 15000 acres of land. In Lakshimpeta village, after the construction of the reservoir, 240 acres of land intermittently comes out of the submergence when water dries up. As the land turns fertile, rich crops were being raised on it with profitable cultivation in the past five years. The government paid a compensation of two lakh rupees per acre to Kapu land owners and settled 190 Kapu families and 60 dalit families about seven kilometres away from the reservoir. The dalit families were not paid any compensation or given employment though they were also displaced and resettled except for four families, who had assigned lands—only 40 thousand rupees per acre were paid to each of these four dalit families. Meanwhile one each from 40 families of the Kapu caste was provided with employment in the reservoir office departments in addition to compensation amount for land. All 250 families were settled in pacca houses built by the government. Having been deprived of land for centuries, the dalits of Lakshimpeta, as in most other cases, aspired to take over the unaffected land under the project and they have been asserting their rights over the land which now falls under the control of the government.

As the 240 acres of land—that once belonged to Kapu community became government land after compensation was being paid—came out of submergence every now and then,  180 acres of land has been cultivated by the Kapu families while only 60 acres by 60 dalit families in the last five years.  Kapu community in the village claimed that the entire land belongs to them as it once belonged them. Dalits argued with the local revenue administration that they should be allowed to cultivate this land as it was now government land. END_OF_DOCUMENT_TOKEN_TO_BE_REPLACED