[Anuradha Gandhy, a leading member of the Communist Party of India (Maoist), was both intellectual and activist who wrote about and organized the revolutionary women’s movement in India, developed theory on the relationship of the women’s movement and the movement of Dalits to the overall revolutionary struggle, and many other significant contributions.  Her life was cut short with an untimely death due to disease in 2008.  But her spirit and her words continue to guide the ongoing revolutionary movement. As March 8, International Women’s Day, approaches, we offer this interview with “Anu” from 2001. — Frontlines ed.] 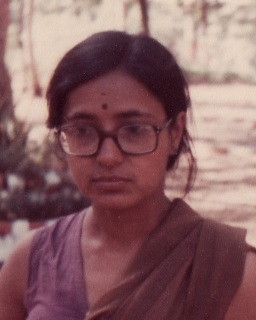 People’s War has shattered the hesitations of the women of Dandakaranya!

(In this issue of Poru Mahila we are introducing to our readers Com. Janaki who had been working in the urban movement and had come to Dandakaranya to observe the adivasi peasant movement and to participate in it. Com. Janaki had led the guerilla squads directly as a divisional committee member of South Bastar from 1997 to 2000. Poru Mahila chatted with her on her experiences in the urban movement and in the adivasi peasant movement. We are here presenting the main features of that conversation – Editor, Poru Mahila).

Po. Ma: Com. Janaki, would you please first explain to us the oppression faced by urban women?

Com. J: Though all women in India are under feudal, capitalist, imperialist and patriarchal oppression, it is seen in various forms in different areas, the urban and the rural areas. The working class and middle class women in urban areas have some specific problems.
Firstly, if we look at the problems inside the family, even in urban areas women are oppressed by the feudal culture.

Though the oppression of this culture may be less severe, still the majority of the young girls and women do not get the right to take important decisions regarding their lives from the family. The unmarried girls are under pressure to marry men from the same caste and same religion according to the decisions of the family. If a girl decides to marry a man of her choice from another caste or religion she will be subjected to a lot of pressure. She would have to face severe opposition from the family. Even if a woman wants to work outside home she will have to take the permission of her father, brother or husband. People of some castes and religions (for e.g. the Muslims and Kshatriyas) do not like their woman to do jobs. So it becomes inevitable for women to fight even for economic independence.

In addition since capitalist values have spread widely man-woman relations have also become commercialized and women are facing severe problems. The dowry and other items which have to be given to the grooms’ family before and after marriage has become a big problem for the parents who gave birth to girls. Added to that, it had become common to all communities to harass women for dowry both physically and mentally. When the wife’s life can be measured in money and gold killing her for their sake is not far behind. This terrible situation can be found in many households in the urban areas now-a-days. Especially since the past 25-30 years may be India is the only country in the world where the new crime of burning brides for dowry has come into vogue. END_OF_DOCUMENT_TOKEN_TO_BE_REPLACED